In Alabama, voters are heading to the polls today in a special election for a U.S. Senate seat that pits Democrat Doug Jones against Roy Moore, an anti-abortion candidate who has been accused by at least nine women of sexually harassing or assaulting them when they were teenagers—one as young as 14. We get response from Planned Parenthood President Cecile Richards and Samantha Holvey, a former Miss USA Contestant who is one of 16 women who have accused President Trump of sexual misconduct and grew up in the southern United States.

AMY GOODMAN: And we want to get both of your comments on Roy Moore. Samantha, you’re from North Carolina.

SAMANTHA HOLVEY: I went to college in North Carolina. I grew up in West Virginia. I was born in Texas. I’m a Southern girl.

AMY GOODMAN: So, which makes it even more relevant to talk about Roy Moore right now. Your thoughts about President Trump endorsing this accused pedophile, this accused child molester?

SAMANTHA HOLVEY: I was absolutely disgusted, but not surprised, because that’s his MO. That is another testament to his character, the person he is. And, you know, it doesn’t matter that women come out with evidence. And this is—like, to make sure everybody knows, this is not a “he said, she said” thing. This is a “he said, she verified what he said, and then he said that he didn’t say that.” So, you know, it’s not a surprise that he came out for Roy Moore.

JUAN GONZÁLEZ: And, Cecile Richards, I wanted to ask you about Roy Moore, especially the—the race in Alabama has got a lot of attention over the allegations against Moore of abusing young women, but also another big issue has been abortion and what Roy Moore’s stand has been historically on abortion.

CECILE RICHARDS: Right. Well, and I think that Roy Moore, in an effort to distract any attention from his own behavior, is now trying to make this—make extreme accusations against Doug Jones around the issue of abortion. What we’ve seen is, actually, that issue is not the primary issue in this race. And, in fact, I think more women are drawn to be engaged in this race because of the support that Doug Jones has for women’s rights.

Look, the difficulty of this race and why I guess the president is down there and trying to prop this up is, there’s a huge partisan disadvantage. I mean, the fact that Doug Jones is even competitive in this race says how weak a candidate Roy Moore is and how desperate the Republicans are to win this Senate seat, that he has sitting members of the Senate willing to stand by a man who has been accused by so many women, including underage women, of sexual harassment and assault. It’s absolutely astounding. And I was really glad to see Senator Jeff Flake, who I don’t agree with on many things, but the fact that he is willing to say, actually, “We have to put our country ahead of our party.”

AMY GOODMAN: I wanted to play this clip from Meet the Press Daily with Chuck Todd. It’s Doug Jones saying he’s a firm believer that a woman should have the freedom to choose what happens to her own body.

DOUG JONES: I am a firm believer that a woman should have the freedom to choose what happens to her own body. And I’m going to stand up for that, and I’m going to make sure that that continues to happen. I want to make sure that, as we go forward, people have access to contraception, they have access to the abortion that they might need, if that’s what they choose to do. I think that that’s going to be an issue that we can work with and talk to people about from both sides of the aisle. It’s one of those issues that I think—

CHUCK TODD: But you wouldn’t legislate—so you wouldn’t be in favor of legislation that said ban abortion after 20 weeks or something like that?

DOUG JONES: No, I’m not in favor of anything that is going to infringe on a woman’s right and her freedom to choose. That’s just the position that I’ve had for many years. It’s the position I continue to have. But when those people—I want to make sure people understand that once a baby is born, I’m going to be there for that child. That’s where become a right-to-lifer.

CECILE RICHARDS: Right. I think—I mean, I think that’s what’s important to understand, is people in Alabama who are completely against women’s access to safe and legal abortion, they’re not voting for Doug Jones anyway. This is really not—this is really not the issue. I think the important thing is what Mr. Jones says, which is people in this country believe, including in the South—and I’m from Texas, too—they believe that a woman and her doctor should be the ones making decisions about her pregnancy, not the government and certainly not the state legislature—and, I got to believe, for the majority of women in Alabama, certainly not Roy Moore.

AMY GOODMAN: And before Samantha leaves, as you were congratulating her, Cecile, you, too, came out a few days ago in Tina Brown’s event in Texas, when she asked about whether you were ever sexually harassed or assaulted.

CECILE RICHARDS: Sure. And I guess, Amy, I grew up in a time in which—of course, you know, I remember my first job out of college, where I was an intern in the summer and being sexually assaulted by my boss. That was before time that there was—well, like, who were you supposed to say it to? Who were you supposed to report it to? And, of course, I think we all think back now and say, “I should have done more.” And frankly, that’s why I’m so incredibly proud of Samantha and the women who are risking taking on the president of the United States and telling their stories. And so I just want to say, on behalf of the millions of women around the country who have been assaulted, thank—and thank them for the courage.

AMY GOODMAN: Well, Cecile Richards, we’d like you to ask you to stay with us to talk about the state of women and reproductive rights in this almost year under President Trump. And thanks so much, Samantha Holvey, for sharing your story today—

AMY GOODMAN: —and bravely being a part of that news conference yesterday. Samantha Holvey is a former Miss USA contestant from North Carolina, when Trump owned the pageant. She’s one of 16 women who have accused President Trump of sexual misconduct.

This is Democracy Now! When we come back, we’ll continue with Cecile Richards, the president of Planned Parenthood Federation of America. And then, we’ll be speaking with a man who’s served something like 13 terms in office, who’s announced he’s resigning. We’ll be speaking with Congressmember Luis Gutiérrez. Stay with us.

AMY GOODMAN: Lady Gaga, performing song “Til It Happens to You,” one of the most powerful moments at the Oscars in 2016, Lady Gaga herself a sexual assault survivor. 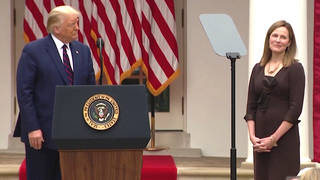