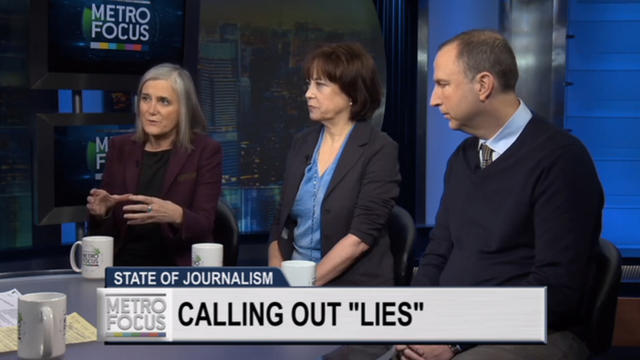 Click here to watch the full PBS MetroFocus special on Trump and the press.

Goodman talked about the state of adversarial journalism in the Trump era.

AMY GOODMAN: For a long time, journalists have enjoyed what I call the access of evil, trading truth for access. Asking softball questions to get that access so that you got your question answered by the president. And right now a lot of journalists are questioning all of this. There’s no question that when Jim Acosta asked that question, and Donald Trump tried to ignore him, the next reporter and the next should have said, “I defer to Jim Acosta,” or “I ask that question” [sic]. Of course the next reporter he turned to was Breitbart, the white nationalist white supremacist news organization, and of course they were going to ask another question. But journalists together have to stand up when it comes to protecting our profession. It is absolutely critical, essential to the function of our democratic society. …

And now the media really has found its backbone. They’re being fiercely attacked by President Trump. I’ve been surprised, frankly. The media tends to cozy up to power, and I think if Donald Trump would just let them cozy up, I think they would, in the matter of about a week. But he continually is kind of punching them in the face, pushing back, banning people, stopping people from asking questions.

StoryNov 13, 2019Bill Moyers on Impeachment: All Presidents Lie, But Trump Has Created a Culture of Lying