Summer days are long and hot in the Rio Grande Valley, the verdant flood plain that stretches 100 miles along the U.S.-Mexico border in Texas, from McAllen to Brownsville. This is the epicenter of President Donald Trump’s self-created immigrant family separation crisis, with at least 2,047 children torn from their parents’ arms and imprisoned. The main child detention center in Brownsville is in an old Walmart, its vast interior space filled now not with products manufactured by low-wage workers in distant foreign factories, but with 1,400 children penned inside of chain-link cages with Mylar sheets for comfort. Southwest Key, the nonprofit agency that runs this detention center, actually calls it Casa Padre, “Father’s House,” a painful reminder to so many children separated from their fathers.

Detention of immigrant families has been happening for years and even accelerated under President Barack Obama. But, on May 7, the cruel triumvirate of Trump, his famously anti-immigrant advisor Stephen Miller and Attorney General Jeff Sessions enacted by fiat the “zero tolerance” policy. Sessions promised, “If you are smuggling a child, then we will prosecute you and that child will be separated from you.” The attorney general should understand that it is not unlawful to protect your child from violence by entering the United States and applying for political asylum. He later quoted Scripture in defense of the state kidnapping and jailing children.

Last Thursday, over a thousand people rallied in front of the federal courthouse in Brownsville under the banner “Families Belong Together.” Among them was Juanita Valdez-Cox, executive director of La Union del Pueblo Entero, or LUPE. She told the “Democracy Now!” news hour a chilling story of how Trump’s family separation policy gets implemented in the Rio Grande Valley:

“A father was traveling with his 8-year-old and 10-year-old. When they crossed the border, they were apprehended by immigration. So the father is here at a detention center, and the children were placed separately.”

Valdez-Cox continued: “So the father calls the family, frantic and worried that he didn’t know where the children went. We were trying to get the children together, for three days. … We finally found them. An 8- and 10-year-old were deported on their own. The mother and father didn’t know where they were.” She said that U.S. government officials actually took these two children, drove them to a bridge over the Rio Grande, pointed them south and told them to walk back into Mexico, alone.

“The family is the bedrock of our nation,” the GOP moralizes on its website under the heading “Family Values.” Square that with the struggle these children faced, ripped from their parents and forced to walk into Reynosa, Mexico, a notoriously violent border city.

Juanita Valdez-Cox told us of another case, of two babies, a 1-year-old and a 9-month-old. LUPE helped distraught relatives locate them: “It is just heartbreaking to see the children crying. Yes, they [the detention facility employees] can feed them and change their diaper, but they’re not allowed to pick them up and to hold them. Apparently, the government wants to be careful about child abuse. Isn’t that ironic? They are already doing the worst thing that could happen to the children.”

On June 26, federal Judge Dana Sabraw in San Diego issued a sweeping order, stating that the “zero tolerance” policy “violates Plaintiffs’ constitutional right to family integrity,” and instructing the government to reunite all detained children under 5 years old with their parents within 14 days — deadline July 10 — and children 5 and older within 30 days.

While the government has since refused to say what has happened to the children, Health and Human Services Secretary Alex Azar inexplicably told the Senate a week ago: “There is no reason why any parent would not know where their child is located. I could … with just basic keystrokes, within seconds, could find any child in our care for any parent.”

As late as June 28, the “Democracy Now!” team witnessed two separate groups of children. One pair of boys in their teens, just released from three months of detention in Casa Padre, were departing from Brownsville airport. Another group of six, much younger, were in transit at the Dallas airport. Their adult overseers wouldn’t allow us to speak with them as they boarded our flight to Newark.

This Independence Day weekend, as families picnic together around the country, let’s all remember that many families have been torn apart and jailed. Remember also that much of the bounty enjoyed at those picnics will have been harvested by immigrant hands. Let’s not allow Trump to Make America Hate Again. 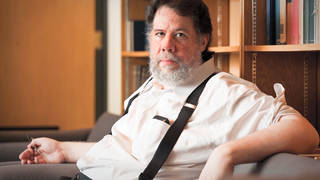