This week 10 Democratic candidates and one independent in the 2020 presidential race, including Senators Bernie Sanders and Elizabeth Warren, addressed indigenous communities at the first-ever Frank LaMere Native American Presidential Forum in Sioux City, Iowa. During the two-day event, candidates individually answered questions from a panel of tribal leaders and Native American youth and elders on issues including treaty rights, voter suppression, and murdered and missing indigenous women.

AMY GOODMAN: Ten presidential candidates, including Senators Bernie Sanders and Elizabeth Warren, traveled to Sioux City, Iowa, this week for the first-ever Native American Presidential Forum. The forum was held just weeks after Congresswoman Deb Haaland, one of the first two Native American women in Congress, publicly endorsed Senator Warren for president, calling her a, quote, “great partner for Indian Country.” Warren came under fire last year after she released the results of a DNA test as evidence of her family’s longtime claim to have Native American ancestry. On Monday, Senator Warren apologized for her actions.

SEN. ELIZABETH WARREN: Now, before I go any further in this, I want to say this: Like anyone who’s being honest with themselves, I know that I have made mistakes. I am sorry for harm I have caused. I have listened, and I have learned a lot. And I am grateful for the many conversations that we have had together. It is a great honor to be able to partner with Indian Country, and that’s what I’ve tried to do as a senator, and that’s what I promise I will do as president of the United States of America.

The federal government’s history with our tribal nations has been one of broken promises. We need to make change. We need to honor our trust and treaty obligations to the Native tribes. And we’re not going to do that with one little statute over here and a couple of changes in regulations over there. It’s going to take big structural change. That’s how I see this. Think of it this way: full funding for housing, for healthcare, for education, for infrastructure. Those are not optional. We need to change the rules and make it happen.

MARCELLA LEBEAU: I do have a question, and this relates to the massacre at Wounded Knee. And to me, my personal opinion, there’s a pervasive sadness that exists on our reservation because of unresolved grief, when these Medals of Honor were given to the 7th Cavalry soldiers at the massacre at Wounded Knee, when they killed approximately 250 women and children and the leader, who was ill with pneumonia. And so, all of these things have a bearing on the feelings and helplessness of people on our reservation — the elders, the children, everyone. And so, my question is: Will you support the removal of the Stain Act? That is my question.

SEN. BERNIE SANDERS: The answer is absolutely. Medals of Honor are given rarely, and they’re given to people who do very, very important things. And I want to thank you for your work. I know you received recognition, I believe, from the French government and elsewhere, for the work you have done in World War II in saving lives. That’s the type of a person who receives Medals of Honor. They’re very rare, and they’re given to people who show great, great bravery. Massacring women and children is not an act of great bravery; it is an act of depravity — depravity.

You know, this afternoon, and in the few minutes that I have here, we’re not going to resolve all of the issues of the last 500 years, but I think it is important, not differently, by the way, than how we deal with the abomination of slavery, that the time is long overdue for us to be having that discussion of what happened when the first settlers came here and the terrible and horrible things that were done to the Native American people, not only at Wounded Knee, but in so many other places. I think that is a discussion that the American people actually want to have. And at the end of that discussion must be the necessity of us doing everything that we can to repair the damage, the psychological damage, the humiliations, and also address the real needs of the Native American people today, who in many cases are living in poverty. So there’s a lot of work to be done. But to acknowledge — and it will not be easy; a lot of pain there — but to acknowledge what the settlers did when they came here and what has happened over the last many, many years is something that this country is going to have to address. And as president, I look to forward to addressing it with you. Thank you.

MARK CHARLES: Missing and murdered indigenous women is a massive, massive problem in our country, in our communities. Probably most everyone in the room has not just heard about this on the news; you probably have a relative or friend and neighbor who is missing or has been murdered or has been assaulted and was not properly followed up on.

A lot of candidates are going to propose that we need new laws to protect these vulnerable communities. I would say we don’t need new laws, we need a new basis for our law. When you have a Constitution that never mentions women, you cannot act surprised when women are assaulted, murdered and go missing, and law enforcement and society doesn’t care. We don’t need a new law; we need a new basis for our laws. We need to deal with the foundations of the country.

AMY GOODMAN: Independent presidential candidate Mark Charles of the Navajo Nation. When we come back, he’ll join us as part of our roundtable discussion on the 2020 presidential race and the Native American vote. This is Democracy Now! Back in a minute. 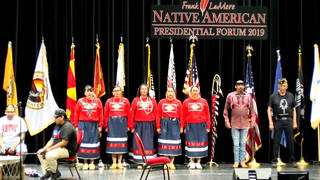