Fallout from the Trump administration’s decision to pull out of the landmark 1987 Intermediate-Range Nuclear Forces Treaty is mounting. Russian President Vladimir Putin has ordered his military to prepare for what he called a “symmetrical response” after the U.S. tested what it said was a nonnuclear cruise missile earlier this week. The U.S. launch was the first test of its kind since the Trump administration withdrew from the INF. We speak to Senator Jeff Merkley of Oregon about U.S. nuclear policy, as well as the Green New Deal, President Trump’s wish to buy Greenland and more.

AMY GOODMAN: I want to shift gears and ask you about the fallout from the Trump administration’s decision to pull out of the 1987 INF, the Intermediate-Range Nuclear Forces Treaty, just a few weeks ago. Russian President Vladimir Putin today is ordering his military to prepare for what he called a “symmetrical response” after the U.S. tested what it said is a nonnuclear cruise missile earlier this week. The U.S. launch was the first test of its kind since the Trump administration withdrew from the INF. Earlier this week, you co-signed a letter urging the Trump administration to ban the deployment of low-yield nuclear missiles and to extend a New START treaty. And you introduced a bill earlier this year to prevent a new nuclear arms race. Is that what we’re about to see right now?

SEN. JEFF MERKLEY: Amy, when I came out of graduate school, I was planning to work in developing countries around the world on basic healthcare, etc. And I was at the World Bank briefly and was planning to go to Africa, and I was offered a presidential fellowship to work on strategic nuclear policy. And I switched 180 degrees to that issue, because at that moment that was the biggest threat to the planet.

And here we are. We had significant advances with the INF Treaty, that was done during the 1980s while I was working on these issues, the SALT and then New START, that was implemented a few years ago. And this administration is undoing all of that.

There is nothing beneficial to the planet to enter a new nuclear arms race. And under the Nonproliferation Treaty, the nuclear power states have a big responsibility to significantly reduce that arms race, reduce their inventories, in partnership with other countries saying, “We will not become a nuclear power.” And so, it isn’t just about this competition with Russia and the impacts it will have on other countries. It’s also about the nonnuclear power states and whether they feel like they are going to refuse to have a nuclear weapon, because: Are the superpowers doing their job? So this is very dangerous stuff. Very expensive. We have a — there is a plan from the administration over the next 30 years. It’ll be over a trillion dollars spent on refurbishing nuclear systems, without the arms race. With the arms race, how much more will that be? Is this really what we need in the United States? Is this what the world needs? The answer is absolutely not.

AMY GOODMAN: Your response to President Trump pulling out of that state visit to Denmark, calling the prime minister, who is a woman, “nasty,” because she called his idea “absurd,” saying we’re long past the time when we can sell populations, because she refused to sell Greenland to him?

SEN. JEFF MERKLEY: Oh, our international standing has dropped so dramatically because America has a president who’s not rational, who is basically cozying up to dictators while insulting and demeaning our allies. There is no sense of soft power leadership from the United States of America. There is no respect left for the president of the United States. So, this is deeply damaging to all the things we care about.

AMY GOODMAN: It seems that the Republican Party, when they were the minority party in the Senate, could accomplish a lot more than the Democrats can as the minority party — you’re in the Senate — on what can be done on any number of issues, particularly right now, for example, talking about an assault weapons ban, after the latest massacres.

SEN. JEFF MERKLEY: Well, today in The New York Times, Mitch McConnell has an op-ed in which he says, “Oh, we would never go to a simple majority. What are the Democrats thinking about, about pondering getting rid of the filibuster? Terrible idea. We have integrity, the Republicans. We would never do this.”

This is, of course, a big lie. The truth is, the Republicans had two top priorities. One of those was tax cuts for the wealthy. The other was Supreme Court. They changed the rules on both, to go from a supermajority to a simple majority. They have done this for their agenda for the powerful.

The question is: Will Democrats go to a simple majority for an agenda for the people? Are we going to accept the Senate as being a chamber that obstructs the basic vision, “we the people” vision, of the United States of America?

AMY GOODMAN: We just got news that “David Koch, the billionaire libertarian who gave more than $1 billion to charitable causes but was better known for using his money to reshape U.S. politics” — I’m reading, actually, from The Wall Street Journal — David Koch has died. The Koch brothers, of course, the famous oil barons. Which brings us to the Green New Deal. Senator Sanders formally unveiled his Green New Deal on Thursday, a $16.3 trillion proposal, that is a significantly larger amount than any plan released by his opponents in the Democratic presidential race, proposing reaching 100% renewable energy by 2030, total decarbonization by 2050. Sanders also plans to transform America’s agricultural system by investing in small family-run farms, create 20 million jobs with strong benefits and safety standards, which he says will effectively end unemployment. And he says it will pay for itself over the next 15 years. What are your thoughts about this, as we look at the horror of the fires throughout the Amazon right now?

SEN. JEFF MERKLEY: This is exactly the type of a visionary plan we need to have. In 2017, I put together a plan, that Bernie Sanders came out and launched it with me. It was called Mission 100. It laid out a transition to 100% renewable energy, the end of fossil fuels in every energy sector by 2050. Many have said, “Well, yes, but do it even earlier, if you possibly can.” Absolutely.

I’ve been doing this exercise with people across the country in which I’ll have a group breathe in — and I’ll do it with you. We’ll breathe in, and we’ll hold our breath for three seconds, and we’ll exhale. Ready? Breathe in. Exhale. That air is completely different from the air when I was born. It has 33% more carbon in it. And every one of those carbon molecules is trapping heat.

We are destroying the planet in this generation. It has huge impacts. We must aggressively transition to renewables. Bernie Sanders has laid out a really aggressive plan. I applaud him. Four years ago, we didn’t even talk about climate in the presidential debates, which I was so frustrated about. And I want to say thank you to Governor Inslee, who has exited the presidential race but made climate what he talked about on every occasion, giving great service to America.

AMY GOODMAN: Do you condemn the DNC’s decision not to allow a climate-only debate?

SEN. JEFF MERKLEY: So, there is a — they haven’t completely decided yet. They’re going to have another vote. I’m encouraging them, absolutely hold a climate debate. This is going to be — because, first, it is the issue threatening our planet. Can human civilization cope with how fast we’re changing the planet and destroying the ecosystems?

And by the way, this is not an urban issue or a rural issue; this is an everyone issue. The biggest effects right away in terms of Americans, it is farming, it is fishing, it is forestry — foundation pillars for the rural economy, which was why we need to engage with rural America. They’re feeling the impact, but they’re listening to Fox News say there’s nothing going on. We have to get the truth and the partnership with rural America.

AMY GOODMAN: Senator Merkley, you were the first Democratic senator to endorse Bernie Sanders in 2016. Will you be endorsing him again?

SEN. JEFF MERKLEY: I’m going to wait quite a while on the endorsement front. I really applaud so many people getting into this race and bringing so many ideas to bear. I think it’s a very healthy discussion. It’s going to sort itself out to a much smaller field here shortly. But I love many of these individuals who are running and bringing their ideas and thoughts to bear.

AMY GOODMAN: You called for President Trump’s resignation in 2017 over the number of women who had said he sexually assaulted them. Are you continuing to call for that, and do you support his impeachment?

So, my first political act was when vice president to Nixon, Spiro Agnew, was convicted of bribery. And his penalty of taking $100,000 in bribes? $10,000. I’m like, “Oh, this is justice for the powerful in American: You keep 90% of your ill-gotten proceeds. What happened to equal justice under law, those four words carved into the facade of the Supreme Court above the front doors?” And so I wrote a letter to the local newspaper. I was a junior in high school. They published it. And I think about this all the time.

AMY GOODMAN: Senator Jeff Merkley, I want to thank you very much for being with us, Democratic senator from Oregon and new author. His first book is just out. It’s titled America Is Better Than This: Trump’s War Against Migrant Families.

When we come back, the Amazon. There’s a meme going around right now. It’s gone viral online. It says, “The wrong Amazon is burning. The wrong ice is melting.” Stay with us.

“Our House Is On Fire”: Brazil Faces Global Outrage as Massive Fires Spread in Amazon Rainforest 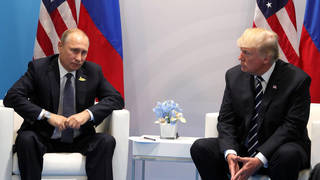 A March to Disaster: Noam Chomsky Condemns Trump for Pulling Out of Landmark Nuclear Arms Treaty