We look at an incredible story unfolding in Venezuela of a failed coup attempt. Did a former Green Beret mastermind it? Two Americans have been arrested in Venezuela. President Nicolás Maduro claims the U.S. was behind the plot. “It looks like a bad Rambo movie, or a really bad telenovela,” says Miguel Tinker Salas, author of “The Enduring Legacy: Oil, Culture, and Society in Venezuela.” He notes that “the U.S. is seeking regime change … and the consequences for Venezuela could be very dire going forward.”

AMY GOODMAN: This is Democracy Now!, democracynow.org, The Quarantine Report. I’m Amy Goodman, with Juan González. We’re in the epicenter of the pandemic, as we turn now to, though, an incredible story unfolding in Venezuela, where President Nicolás Maduro announced Monday the government had detained two former U.S. Special Forces soldiers who took part in a failed coup attempt against him, after 10 armed men landed in a boat near Caracas on Sunday. Venezuelan authorities killed eight of the men, whom they described as “mercenary terrorists.” Two men were captured. Speaking from his presidential palace, President Maduro showed U.S. passports for the two men, identified as Airan Berry and Luke Denman. A former Green Beret named Jordan Goudreau has acknowledged the men were working with him, and says they attempted to detain Maduro. Maduro accused the U.S. of being behind the plot.

PRESIDENT NICOLÁS MADURO: [translated] Mike Pompeo was betting on this attack and believed that this attack would end the revolution, end the constitution, overthrow the government and kill me. God save us and protect us.

AMY GOODMAN: The former Green Beret, Jordan Goudreau, runs a Florida-based private security firm called Silvercorp USA. He told the Associated Press two Special Forces veterans he fought with in Iraq and Afghanistan were involved in the operation. Goudreau posted a video on Twitter Sunday in which he called the attack “Operation Gideon.”

JORDAN GOUDREAU: At 1700 hours, a daring amphibious raid was launched from the border of Colombia deep into the heart of Caracas. Our men are continuing to fight right now. Our units have been activated in the south, west and east of Venezuela. Commander Nieto is with me, is co-located, and Commander Sequea is on the ground now fighting.

AMY GOODMAN: Goudreau told the Associated Press the last time he communicated with the two Americans who were detained was when they were still offshore, running low on fuel.

Goudreau’s plan to oust Maduro reportedly began when he provided security at a concert organized by British billionaire Richard Branson in support of Venezuelan opposition leader Juan Guaidó. The Associated Press reports Goudreau had a connection to Trump’s longtime bodyguard, Keith Schiller, and Goudreau reportedly accompanied Schiller to a meeting with Guaidó’s representatives last May in Miami. President Trump has denied any involvement, any U.S. involvement.

For more, we’re going to Miguel Tinker Salas, professor at Pomona College in Claremont, California, author of The Enduring Legacy: Oil, Culture, and Society in Venezuela, as well as Venezuela: What Everyone Needs to Know.

Welcome back to Democracy Now!, Professor. Can you explain what you understand took place? Was this an attempted coup against Venezuela? And at who exactly’s direction?

MIGUEL TINKER SALAS: It all appears to be an attempted coup. Again, events are unfolding in Venezuela. At the same time, it looks like a real bad Rambo movie or a really bad Venezuelan telenovela.

The reality is that this involved disgruntled Venezuelan military, former police, deserters, political opponents of the Maduro government, and was training in Colombia, and somehow thought that by landing two boats — one in Macuto, right next to the major airport and port, and the other one in Chuao in the state of Aragua — that they would somehow manage to get to Caracas and capture Maduro and install a new government. It is almost fictional.

JUAN GONZÁLEZ: And, Miguel Tinker Salas, there was a report out of Venezuela that there was a contract that surfaced, a $200 million contract, that supposedly the opposition leader, Juan Guaidó, signed with Mr. Goudreau in late October. Could you talk about that?

MIGUEL TINKER SALAS: Sure. Goudreau actually presented the contract to Patricia Poleo, an opposition broadcaster in Florida. And she posted it and reported it on her website, and invited Guaidó and J.J. Rendón, the person in charge of Maduro’s publicity and campaign, and other individuals to come forward and deny it. None have come forward to deny it. So this plot could long-term implicate not only the U.S. government, also the opposition in Venezuela, Guiadó, and others. It also allows them plausible deniability.

But I insist it’s the context in which Pompeo, Elliott Abrams and the Trump White House have created, during the pandemic, seeking regime change, imposing further sanctions, tightening those sanctions and authorizing movement of U.S. military to the Caribbean and others, that sets the context and the landscape for which this event happens.

JUAN GONZÁLEZ: And you mentioned Elliott Abrams. Is it conceivable that President Trump’s special envoy to Venezuela had no knowledge of what was going on here?

MIGUEL TINKER SALAS: It’s difficult to imagine that given they were training on the Colombian border, an area that is highly surveilled, an area where the Colombian military is very active, that somehow they would not have picked up any information. Plus, Goudreau, when he tweeted, included @realDonaldTrump in his tweets about the activities happening in Venezuela. So, again, what the U.S. would like is possible deniability. We may find out later on that, yes, they knew about it, turned a blind eye to it, see if it would actually be successful, and eventually then take advantage of it if it did.

But again, I insist it’s the context in which it operates that is the most fundamental, because it creates the conditions for a attempted violent, unconstitutional regime change in Venezuela, when in fact what Venezuela needs in this time period is negotiations between the different political forces, where funds can be released, where they can fight the coronavirus, where they can try to find common ground as opposed to continued conflict we’ve seen before.

AMY GOODMAN: So, what more do you know about Silvercorp, this Florida security firm, which provided security for President Trump two years ago at one of his political rallies in North Carolina? A photo shows Goudreau wearing an earpiece at a Trump rally in Charlotte, North Carolina, at a coliseum. And echoes of what is this, Miguel Tinker Salas, especially for young people who don’t know the U.S. involvement in the ’80s in Latin America?

MIGUEL TINKER SALAS: It has echoes of a Bay of Pigs. It has echoes of psychological operations and psych operations and black op operations that were done in Latin America during the entire 1970s, ’80s and ’90s. It even harkens to Venezuela. In 1806, Francisco Miranda attempted an invasion of Venezuela through La Vela de Coro in the Península Paraguaná and did not have any support from the Afro population in the region. In fact, they rebelled against him.

So there are shades on many things here, which is all very troubling to Venezuela, because, again, Goudreau appears delusional. He seems to be an Erik Prince Blackwater wannabe. He provided security for a concert that was held on February 23rd by Branson on the Cúcuta border with Venezuela. So, he has injected himself into opposition politics, into what was happening with Guaidó at the border. So, again, it’s a very, very dangerous figure. Although he may have this delusional sense of himself and grandeur, he can play in that role because of U.S. policy.

MIGUEL TINKER SALAS: Well, I think the key thing is that, again, most U.S. policymakers continue to look at Venezuela as Maduro teetering, because, again, their main informants are Guaidó and the opposition, rather than open up space, rather than engage in conversation, in negotiations. Maduro actually still has military support. We saw that once again on Sunday when the so-called invasion happened.

AMY GOODMAN: Miguel Tinker Salas is a professor at Pomona College in Claremont, California, author of The Enduring Legacy: Oil, Culture, and Society in Venezuela.

That does it for our show. Democracy Now! is working with as few people on site as possible. The majority of our amazing team is working from home. I’m Amy Goodman, with Juan González. Stay safe. 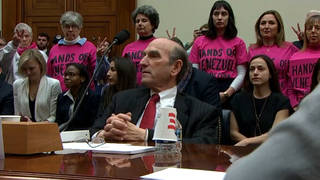