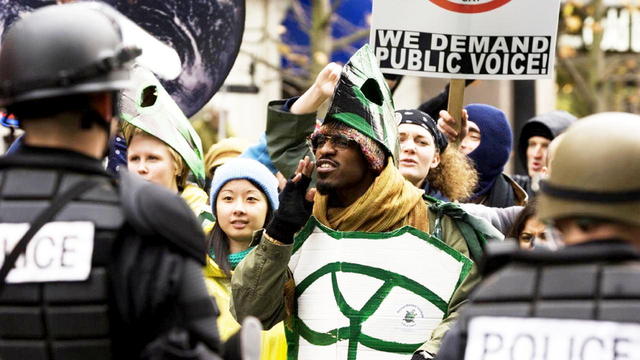 As one activist put it, if almost nobody had heard of the WTO before yesterday, the whole world now knows of the existence of the trade group, which is regarded by many as one of the world’s most powerful and secretive organizations. The trade group, which has 130 delegations from member countries in Seattle, was to begin meetings aimed at launching a new round of world trade negotiations to reduce tariffs in areas ranging from agriculture, to telecommunications, to steel production.

The protesters said that they had been left with no other way of calling attention to their demands but to shut down the WTO’s first day of meetings, after the world body had left out civil society of its secretive decision-making process. Ordinary citizens, they say, should have a say in their key decisions affecting their everyday lives, such as food safety, labor rights and environmental protection.

The story has made headlines around the world, and you might have seen images of looting and violence in downtown Seattle that dominated the corporate news reports yesterday.

The entire Democracy Now! team spent the day and evening on the streets of Seattle, and we were impressed by how in control the protesters seemed to be for almost the entire time.

With well orchestrated acts of civil disobedience, direct action groups took over the city in the first hours of the day, and by midday they were joined by over 20,000 union members who marched through the city after attending an AFL-CIO rally.

The Democracy Now! team fanned out yesterday across Seattle gathering sound of the chronology of the protest. Today we bring you that sound.

StoryJul 30, 2020Noam Chomsky: Decades of the “Neoliberal Plague” Left U.S. Unprepared for COVID-19 Outbreak
The original content of this program is licensed under a Creative Commons Attribution-Noncommercial-No Derivative Works 3.0 United States License. Please attribute legal copies of this work to democracynow.org. Some of the work(s) that this program incorporates, however, may be separately licensed. For further information or additional permissions, contact us.