Today, we stand on the border of two millennia. We will look back on the last century with some of the people who helped to document a pageant of abuse and to fight against injustice. Today we will hear comments from photojournalist Sebastiao Salgado and writer Eduardo Galeano, and talk to author Edward Said, South African National Assembly Speaker Frene Ginwala, author Noam Chomsky, film maker John Pilger, and author Manning Marable.

Said’s identification with and championship of the world’s dispossessed arises from intellectual rigor and personal experience. In 1948, Said and his family were exiled from Palestine and settled in Cairo and now lives in New York. Because of his advocacy for Palestinian self-determination and his membership in the Palestine National Council, Said was not allowed to visit Palestine until several years ago.

Frene Ginwala is a long-time activist for the African National Congress and for women’s rights. In 1960, she left South Africa to arrange the escape of the late Oliver Tambo, the president of the ANC, and to help establish the ANC office in exile. Ginwala became Head of the Political Research Unit in the office of President Tambo and was known for her research on South Africa’s nuclear program, sanctions, and the arms and oil embargo. She also lectured at universities and institutions in various countries and participated in UN, UNESCO and other international conferences.

When the ANC was unbanned, Dr. Ginwala, after more than 30 years in exile, returned to South Africa. There she helped to found the Women’s National

Coalition, and became its first convener. She also served as the deputy head of the ANC Commission for the Emancipation of Women, the ANC Representative on the Science and Technology Initiative, and headed the ANC’s Research Department. She is currently the speaker of the South African National Assembly and co-chair of the Global Coalition for Africa.

StoryJun 26, 2017Arundhati Roy on the Rising Hindu Right in India, the Gujarat Massacre & Her Love of Eduardo Galeano 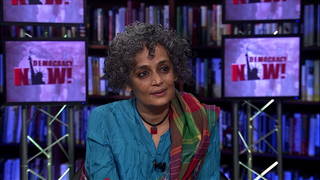 Arundhati Roy on the Rising Hindu Right in India, the Gujarat Massacre & Her Love of Eduardo Galeano