After the Bush Administration Tells the Networks Not to Air Unedited Videotapes of Osama Bin Laden, the Administration Releases a New Tape, Translated By the Pentagon

The Pentagon released a translated videotape of Osama bin Laden yesterday. US intelligence officers claim they found the tape in a residence in Jalalabad in eastern Afghanistan.

The Bush administration says the videotape shows bin Laden betraying his advance knowledge of the suicide hijackingsand spoke about how the destruction had exceeded even his “optimistic” calculations.

But skeptics abroad remained unconvinced that bin Laden did anything more than express pleasure at the success ofattacks.

The Bush administration had argued for days over whether to release the tape. One faction said the tape would proveonce and for all that bin Laden was responsible for the attacks; another said that the poor, dark, grainy quality ofthe tape would leave the administration vulnerable to charges that the tape was doctored or even created by the CIA.

The original content of this program is licensed under a Creative Commons Attribution-Noncommercial-No Derivative Works 3.0 United States License. Please attribute legal copies of this work to democracynow.org. Some of the work(s) that this program incorporates, however, may be separately licensed. For further information or additional permissions, contact us.
NEXTWar On Terrorism for Whom? The US Sentences Cuban Spies to Life in Prison. They Say Theywere Trying to Prevent Terrorist Attacks On Fidel Castro 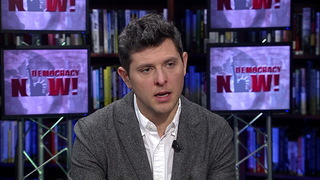