Massacre in Jenin: An American Activist Gives the First Unaccompanied Eyewitness Account From Inside the Camp; Unlike Reporters, He Was Not Led By the Israeli Military

Palestinians charge that the Israeli military has killed hundreds of people in the camp, although this weekend, the Israeli military reduced the number of Palestinians it says died in the conflict down from hundreds to only dozens. International humanitarian organizations are still trying to establish how many people had been killed; how many are still lying wounded, and how many are buried beneath the rubble.

Over the weekend, the stories of death and destruction continued to seep out of Jenin refugee camp, which was once home to 15,000 Palestinians. Those who escaped describe how camp residents leapt from window to window to escape the advancing bulldozers; how some survived beneath the rubble, and called from mobile phones; how some people were cut in half by tanks.

The Israeli army continues to deny these reports, saying that no atrocities have occurred, and that the dead were “terrorists” killed in fighting. According to Jenin municipality authorities, two-thirds of the homes inside the camp have either been flattened or rendered uninhabitable. They say there are about 5,000 people still inside the camp, surrounded by tanks and snipers.

Several convoys of ambulances drove through the alleys of the camp this morning, a day after the Israeli Supreme Court rejected the Israeli military plan to bury most of the bodies from the camp in an Israeli cemetery and insisted the Red Cross monitor the gathering of the corpses.

After banning reporters from the camp throughout the battle, the Israeli military escorted a group of journalists through the camp on Sunday. The official convoy of reporters saw only one body. But this morning, a group of eight international activists made it inside the camp, after facing off with Israeli soldiers, and they have a different story to tell. One of them is Voices in the Wilderness co-coordinator Jeff Guntzel.

The original content of this program is licensed under a Creative Commons Attribution-Noncommercial-No Derivative Works 3.0 United States License. Please attribute legal copies of this work to democracynow.org. Some of the work(s) that this program incorporates, however, may be separately licensed. For further information or additional permissions, contact us.
NEXTA Report From Inside Yasser Arafat’s Compound:International Solidarity Movement Activists Protest Colin Powell’s Visit 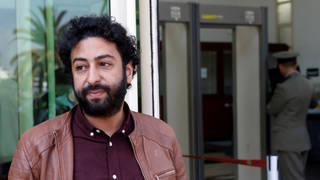 “They Have No Evidence”: Moroccan Journalist Omar Radi Jailed, Surveilled After Criticizing Gov’t