Floods in eastern Germany that have killed at least ten people rose to a record high today in the historic city of Dresden, driving thousands from their homes. The tide of murky brown water also swamped other towns along the River Elbe and prompted the evacuation of tens of thousands.

In the Czech capital Prague, waters retreated today from their record levels allowing some residents to return home, but flooding continues elsewhere in the country and damage estimates are rising rapidly.

As Western attention focuses on the unprecedented floods in Europe, Asia faces a far more serious humanitarian crisis. In India, the flooded Brahmaputra River has cut a vicious swath through India’s remote northeast, killing hundreds of people, leveling homes, washing away schools and leaving millions homeless. Over 1560 people have died in neighboring Bangladesh. In Nepal, over 400 people have either been swept away by swirling floodwaters or crushed under mudslides in remote mountain villages.

Environmentalists have for years warned that man-made pollution is changing global weather patterns leading to more frequent and extreme weather events including floods, heat waves, windstorms, droughts and disruption in water supplies. Climate change may also lead to the spread of serious diseases like malaria and yellow fever. Natural resource industries such as agriculture, fishing and forestry may be impacted. As polar icecaps melt and sea levels rise, entire island nations could disappear and coastal flooding will leave hundreds of thousands homeless ­ mostly in poor, developing countries.

But Climate Change is essentially off the agenda at the Earth Summit set to kick off next week in Johannesburg, South Africa.

The original content of this program is licensed under a Creative Commons Attribution-Noncommercial-No Derivative Works 3.0 United States License. Please attribute legal copies of this work to democracynow.org. Some of the work(s) that this program incorporates, however, may be separately licensed. For further information or additional permissions, contact us.
NEXTAn Indonesian Court Acquits 6 Military and Police Officers From the Carnage During the 1999 Independence Vote in East Timor: A First-Hand Account From a Young Timorese Human Rights Lawyer 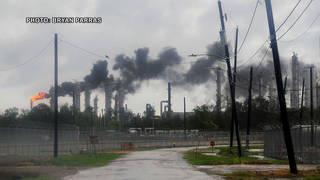