Click here to read to full transcript Republican gubernatorial candidate Arnold Schwarzenegger wrapped up a four-day bus tour across California as he headed for a rally in the state capital yesterday. The latest polls show Schwarzenegger is still leading 135 potential replacements for Gov. Gray Davis Davis in tomorrow’s recall election.

At the center of the story is a private lawsuit filed last year by California’s Lieutenant Governor Cruz Bustamante to make Enron and other power companies pay back $9 billion in illicit profits. The suit shows how they carried off the profits by fraudulent reporting of sales transactions, megawatt “laundering,” fake power delivery scheduling. Palast cites a 34-page internal Enron memo he obtained.

Schwarzenegger has yet to deny that on May 17, 2001 he met with Enron chieftain Kenneth Lay and convicted stock swindler Mike Milken in a hotel room in Los Angeles. The meeting was allegedly part of a plan to recall Gov. Gray Davis and replace him with someone who could make the legal threat go away.

AMY GOODMAN: Greg Palast is on the line with us, investigative reporter; author of “the best democracy money can buy” works; with the BBC.

AMY GOODMAN: Can you explain this memo and why Schwarzenegger two years ago, not a politician at the time, would be meeting with Lay?

There was a secret meeting in the Peninsula hotel in Beverly Hills, California; keep in mind this is still at the height of California’s so-called power crisis in which the prices Californians pay is a 1000% above normal, which we now know has to do with manipulation of the power market by Enron and about a half-dozen other power companies.

This meeting occurs one month after Cruz Bustamante, lieutenant governor and also of course the leading candidate contender against Schwarzenegger, should Davis be recalled.

Cruz Bustamante filed a lawsuit in California court to get back the $9 billion in over-charges, it’s pretty clear that it’s at least 9 billion. It has been carefully calculated by the Independent System Operators there.

This suit looks like a winner and is a real crisis for Enron, still in business at the time in fact still in business today in the post bankruptcy mode. According to memos, all together 34 pages uncovered by the L.A. based Foundation for Tax Payer and Consumer Rights. The whole scheme was to undercut Davis and his administration in their plans to recoup the funds.

So the idea is to come up with some type of settlement scheme that would undercut Cruz Bustamante’s lawsuit, and Davis’s plan demands to get money back from the federal government. What’s happening right now is that the federal government, the Federal Energy Regulatory commission, which is supposed to be like electricity cops of America, they’re faced with stone cold evidence of manipulation of the market by Enron. Every game, get shorty, death star, kilowatt laundering, fake reporting, you name it, the evidence is piled up to the ceiling smoking guns stacked up one on top of the other.

The feds response, keep in mind the head of this agency appointed by George Bush was recommended personally by Ken Lay. So what is he going to do for his political mentor? The agency comes up with the idea of settling these charges for like a penny on the dollar.

Well if the state goes along with that, that means Arnold Schwarzenegger, if he becomes governor this week if the state doesn’t subject to those deals then Cruz Bustamante’s suit is dead on arrival because no judge is going to let a case go forward where the governor doesn’t object to a settlement.

It’s a perfect little scheme, Arnold has to explain himself, and in his only response on Friday evening when I broke the report, one woman did confront Arnold in Bakersfield in front of a supermarket and said, “are you in bed with Ken Lay?”

Arnold’s response was, “I certainly wasn’t in bed with you.” So that’s all we’ve gotten back from the Governator so far.

AMY GOODMAN: While many people know about your uncovering the purged voter roles in Florida; doing reports in Britain well before they were allowed here in the United States about many African Americans and others being scrubbed from the voter roles in 2000 you see a connection between people being disenfranchised in Florida and this recall election which basically redoes the election of Gray Davis.

It’s kind of a coup d’etat by the power companies, in other words, they’re the ones who are really on the line here. The state is in the hole this year for $8 billion; they’re owed $9 billion by the power companies. The obvious solution is staring the state in the face; the success of the actions by Davis and his lieutenant governor, which are virtually unknown and not covered by the press.

There is a question in my mind as to why Davis and Bustamante don’t try to make clear what they’re doing, nevertheless, this is why the core corporate powers are arrayed against both Bustamante and Davis.

I’ve been in this litigation, people may know me as investigative reporter for BBC, but my other little job has been as one of the main investigators of corruption and racketeering by power companies in America.

I was just working with the California Power Association, trying to unravel this business just last week. What people don’t realize is that this suit is heading for courted, heading for almost certain success if it gets in front of a jury, and the only thing that can stop it is like yanking the governor out of the governor’s mansion,. That’s really what is at stake here.

Arnold simply will not explain what he was doing getting himself involved in the scheme by Enron to save itself from… basically, from justice.

AMY GOODMAN: Greg Palast, thank you for being with us, author of The Best Democracy Money Can Buy, investigative reporter with the BBC.

StoryDec 02, 2022The New McCarthyism: Angela Davis Speaks in New York After Critics Shut Down Two Events
The original content of this program is licensed under a Creative Commons Attribution-Noncommercial-No Derivative Works 3.0 United States License. Please attribute legal copies of this work to democracynow.org. Some of the work(s) that this program incorporates, however, may be separately licensed. For further information or additional permissions, contact us.
NEXTArnold Denies Allegations That he “Admired” Hitler 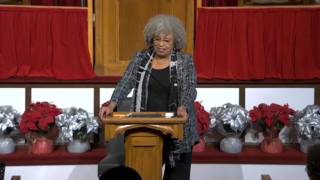