The FBI Vs. Franti?: Hip Hop Star and Anti-War Activist Michael Franti Reveals Members of His Group Spearhead Are Under Intense Governmental Surveillance

For nearly a decade hip hop artist and activist Michael Franti has been a leading progressive voice in music. Franti grew out of the Bay Area music and political scene in the early 1990’s. In 1986 he founded the duo the Beatnigs, paving the way for his next musical endeavor, the Disposable Heroes of HipHoprisy. His most recent musical project is the musical collective Spearhead, begun in 1994.

Franti’s distinctive style is infused with hip hop, soul and jazz influences and driven by his eloquent political lyrics. He has always used music to push social boundaries. He speaks out against sexual violence, encourages his community to prevent the spread of HIV, and sings about the hypocrisy of the US government.

He has also been a leading critic of the invasion of Iraq. And recently he has learned members of his group Spearhead are under surveillance of the U.S.government.

One day after performing at an anti-war rally, relatives of one of Franti’s bandmates got an unexpected visitor. Franti told Democracy Now!:

“His mother received a visit from two plain clothes men from the military and this band member of mine has a sibling who is in the gulf. And they came in and talked to her and said you have a child who’s in the Gulf and you have a child who’s in this band Spearhead who’s part of the 'resistance' in their words. They had pictures of us performing the day before at the rally, they had pictures of us performing at some of our annual concerts that we put on that are in support of peace and human rights.”

“They had his flight records for the past several months, they had the names of everybody who works in my office, our management office Guerilla Management, they had his checking account records. They asked his mother a lot of questions about where he was, what he was doing in this place, why he was going here. They confiscated his sibling’s CD collection that they had brought over to listen to while they were in the Gulf, and basically were intimidating, told her which members of the press she could talk to and which members of the press she should not speak to…”

“For musicians in particular it’s a really hard time. Last week our label received a letter, a mass e-mail from MTV instructing the fact that no videos could be shown that mentioned the word bombing or war. No videos could be shown that had protesters in it. Any footage from military-they gave a list of prior videos that could not be shown, yet MTV has aired videos that show troops saying goodbye to their loved ones and going off to war in a very heroic fashion and troops which are gonna be coming home traumatized, wounded and dead and then be treated and thrown onto the scrap heap of veterans, as we’ve seen veterans treated in this country. And at the Academy Awards, there were also letters and talk that went around saying not to speak out.”

StoryNov 03, 2020“I Am a Citizen”: Watch Nikki Giovanni Read Her Poem “Vote” on the Power of the Ballot 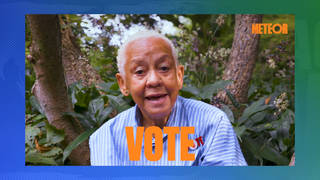