On August 6th, 1945 the U.S. dropped the first atomic bomb on the city of Hiroshima, Japan. The total number killed by the bomb exceeded 200,000. Three days later a second atomic bomb was dropped on Nagasaki. 140,000 people died as a result.

On August 6th, 1945 Harry S. Truman made an announcement to the American public: He said “Sixteen hours ago an American airplane dropped one bomb on Hiroshima, an important Japanese Army base.”

The bomb, nicknamed “Little Boy,” was the first atomic weapon in history to be used in a military operation. 58 years ago today, it was dropped on the city of Hiroshima, Japan. It exploded 1,900 feet above the city center. By the end of 1945, 140,00 people were killed as a direct result of the bombing. In the following five years, the number killed rose to over 200,000.

Although Hiroshima produced military items and housed soldiers, it was not selected as a “purely military target” as President Truman had promised. There were six civilians living in Hiroshima to every soldier.

In his speech Truman described the bomb as a revolutionary new force for destruction, harnessing the basic power of the universe. He warned that if the Japanese did not surrender unconditionally, “they may expect a rain of ruin from the air, the like of which has never been seen on this earth.”

Three days later on August 9th, 1945 the United States dropped a second atomic bomb on Nagasaki. 70,000 people lost their lives as a result. A total of 140,00 died within the next five years.

Today a Democracy Now! special commemorating the 58th Anniversary of the bombing of Hiroshima. We spend the hour listening to the words of survivors of Hiroshima.

We will play an interview with Hiroshima survivor Shigeko Sasamori. She was 13 at the time of the bombing. Shigeko is 71 years-old and lives in Marina Del Rey, California. She is one of 24 young Japanese women invited to New York for surgical reconstruction treatment after the bombing. They came to be known as “Hiroshima Maidens.”

Shigeko Sasamori is in Hiroshima this week dedicating a memorial to Norman Cousins, the American journalist who brought her and 23-other Hiroshima survivors over to the United States for treatment.

StoryAug 06, 2020“The Beginning of Our End”: On 75th Anniversary, Hiroshima Survivor Warns Against Nuclear Weapons

The original content of this program is licensed under a Creative Commons Attribution-Noncommercial-No Derivative Works 3.0 United States License. Please attribute legal copies of this work to democracynow.org. Some of the work(s) that this program incorporates, however, may be separately licensed. For further information or additional permissions, contact us.
NEXTA Pacifica Radio Special: Ruby Dee & Others Read John Hersey’s Hiroshima 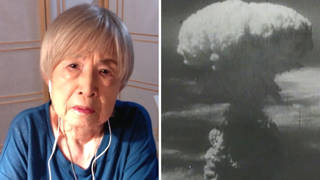