We speak with an attorney with the National Lawyers Guild which recently sent a delegation to Haiti. He says he saw hundreds of corpses being dumped by morgues in Haiti and describes bodies coming in with plastic bags over their heads and hands tied behind their backs, piles of corpses burning in fields and pigs eating their flesh.

It has been a little over a month since Haitian President Jean-Bertrand Aristide was ousted and a new U.S.-backed government was installed in what Aristide has called a “modern-day kidnapping in service of a coup.”

U.S. troops were ordered to Haiti within one hour of President Aristide’s departure even though both President Bush and Secretary of State Colin Powell had said they would not deploy more forces there until there was a political solution. Despite the 3,500 U.S.-led troops in the country, the battle for control is still being waged in numerous Haitian towns.

Louis Jodel Chamblain, convicted in absentia for the 1994 Raboteau massacre, spends much of his time in Cap Haitien. Most of his men, 20 to 35 years old, have a new long-term objective: to serve in a new version of the Haitian army. Aristide abolished the army in 1995 as a coup-prone machine responsible for human rights violations.

The National Lawyers Guild and several organizations denounced the U.S. government for its role in the forced removal of President Aristide. They demanded a Congressional investigation into the role of the U.S. government in the deliberate destabilization of the Haitian government and the implementation of the coup; an immediate end to the repression and daily attacks on those demanding the return of President Aristide; and support for Haitian refugees.

The National Lawyers Guild recently sent a delegation to Haiti to meet with victims and their families, witnesses and grassroots leaders. Attorney Tom Griffin was part of that delegation. He joins us on the phone from Philadelphia.

The original content of this program is licensed under a Creative Commons Attribution-Noncommercial-No Derivative Works 3.0 United States License. Please attribute legal copies of this work to democracynow.org. Some of the work(s) that this program incorporates, however, may be separately licensed. For further information or additional permissions, contact us.
NEXTPalestinian Activist Ordered Released After Two Years in Prison Without Charge 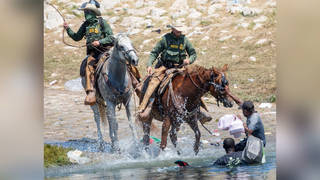