We speak with Howard Zinn, renowned historian and author of “A People’s History of the United States.” Zinn says: “People all over the world are mourning the ascension of Bush to his second term as president… that’s something to feel encouraged about, even as all this pomp and circumstance of the inauguration goes on.” [includes rush transcript]

StoryAug 29, 2013Historian Taylor Branch on the March on Washington and the Kennedys’ Aversion to Dr. King’s Struggle

HOWARD ZINN: Thank you, Amy. It’s a refreshing to listen to Democracy Now! after listening to everything else on radio and television. So, I’m happy to talk with you.

AMY GOODMAN: Well, I understand that you were actually supposed to be in New Orleans.

AMY GOODMAN: For a jazz funeral for democracy. Can you explain what this is?

HOWARD ZINN: Sure. Now, I very often am supposed to be somewhere and I’m never there. But my wife came down with the flu, so I couldn’t go. The jazz funeral for democracy is a wonderful idea, and there’s been — people now about jazz funerals in which people celebrate the death of somebody by affirming the life that must go on. And people are gathering in New Orleans today and they’re going to march down streets through the French quarter of New Orleans to Louis Armstrong Square, and they’re going to have bands and they’re going to have banners. It’s going to be an anti-war demonstration. What they’re going to be doing is while representing this as a jazz funeral for democracy; they will be affirming the determination of people to keep democracy alive. And to continue struggling against the war. So, it will be — you know, both a recognition of what is being done to damage democracy in this country, and also an affirmation of people’s determination to stop this and to restore democracy in this country, so, I think it’s going to be a wonderful event in New Orleans. I’m just sorry that I won’t be there. But — here I am, talking to, which is almost as good.

AMY GOODMAN: Well — well, there are — it’s great to have you with us, and there are hundreds of events taking place around the country. I just got an email saying that Boulder High School students are walking out of class today in protest. We — following up on Martin Luther King’s birthday, can you make a comparison of the contrasts between the celebrations of his birth and the — festivities today in Washington.

HOWARD ZINN: It’s interesting that the inauguration should come a few days after the celebration of Martin Luther King’s birthday, because here we have Bush being inaugurated as President after the — all of the hypocritical statements made on Martin Luther King’s birthday by our leading politicians, and who talk sort of very rhapsodically about Martin Luther King, but absolutely really taking what he stands for and pushing it aside, because Bush represents everything that Martin Luther King opposed. I mean, King spoke against the Vietnam War. He had a famous speech at Riverside church in 1967. Here we are inaugurated a President who has given us two wars in his first term, and is probably planning more wars. Here is King who stood for non-violence, and here is Bush, who represents the most violent nation in history, and — well, King himself called the United States at that time in Vietnam, you know, the greatest purveyor of violence in the world. What he said in 1967 certainly applies to the United States today. And I think that the spirit of King, the spirit of opposing war, standing for non-violence, is something that animates the people who are demonstrating against Bush today in Washington, and in San Francisco and in New Orleans, and in New York and Boston. Well, as you pointed out in Boulder, Colorado, and I am sure in hundreds of places in this country. And I would guess that people around the world — well, it’s more than a guess. We have the evidence that all over the world, people — people are mourning the ascension of Bush to his second term as President. That it’s hopeful that we have sort of a worldwide movement that is determined not to — to put an end to war and create a different kind of world. I think that’s something to feel encouraged about, even as all of this pomp and circumstance of the inauguration goes on.

AMY GOODMAN: Howard Zinn, at the beginning of the program, we played some clips of inaugural speeches past we heard Franklin Delano Roosevelt, Harry Truman, John Kennedy, Richard Nixon, Ronald Reagan. Can you compare what we’re seeing today with some of those?

HOWARD ZINN: Well, this is probably the — as you pointed out, this is the most expensive inauguration. This is the most lavish inauguration, and you know, inaugural days don’t mean very much. You know, except for a lot of money is being spent, and a lot of work is being done to cover up the actual policies that are going on. But of course, these are all different Presidents, and when — when Roosevelt, for instance — probably the greatest contrast is between Bush and Roosevelt when Roosevelt was inaugurated, in 1936, he was inaugurated at a time when he was involved in a — trying to do something about the depression, about poverty in this country. When he was inaugurated in 1936, it was very different then. He had been elected by overwhelming vote, overwhelming majority of the population of the United States as opposed to Bush who just barely squeaked in to office. You know, after a billion dollars were spent on both sides on the campaign. The contrast between Roosevelt coming in 1936 with great popular acclaim, there were no huge demonstrations against Roosevelt when he came into office in 1936. Because he was recognized that he was using the resources of the country to try to help the people who had been hurt by the depression. He was responding to the strikes and the Tenant’s movements and the movements of the unemployed and trying to respond positively to all of that, whereas, Bush, of course, is ignoring the pleas of people who need medical care, who need help with their children. So, we couldn’t have a starker contrast than the spirit that surrounded the inauguration of Roosevelt in 1936, and the — what is associated with the inauguration of Bush now in 2005.

AMY GOODMAN: Howard, I want to thank you very much for being with us. Howard Zinn, historian. 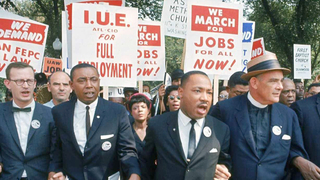