U.S. Peace Activist Brian Avery Returns to Israel Two Years After Being Shot in the Face

We go to Israel to speak with U.S. peace activist Brian Avery. In April 2003, he was shot in the face–he says–by Israeli forces. His face was shattered, with his tongue split in two, forcing him to undergo a series of facial reconstruction surgeries. [includes rush transcript]

We go to Israel now to speak with US peace activist Brian Avery. In April 2003, he was shot in the face–he say by Israeli forces. His face was shattered, with his tongue split in two.

He has undergone a series of facial reconstruction surgeries. Witnesses said an Israeli Armored Personnel Carrier opened fire on Avery but Israel has denied being behind the shooting. On Feb. 28 the Israeli Supreme Court will hear Avery’s petition demanding a criminal investigation into the shooting.

Brian Avery has returned to Israel for the first time since the shooting.He joins us on the line from Tel Aviv.

AMY GOODMAN: Brian Avery’s return to Israel for the first time since the shooting took place, and he joins us now on the telephone from Tel Aviv. Welcome to Democracy Now!, Brian.

BRIAN AVERY: Thanks a lot, Amy. Thanks for having me on.

AMY GOODMAN: Can you talk about what happened to you, and why you’ve returned?

BRIAN AVERY: Yeah. I mean, basically pretty much as Juan laid out, you know, I was shot by Israeli forces in a completely unprovoked attack and essentially left for dead. I was getting no medical treatment or anything by them. And since then, I’ve undergone, or in the process of undergoing a series of reconstructive surgeries to rebuild the damage to my face that was caused. And so at this point, now that some of the medical stuff is starting to progress and I’m getting to a better state of health, I’m very interested in basically prosecuting the soldiers for what, you know, was a criminal act.

AMY GOODMAN: Brian, can you describe the day that you were shot? Where exactly you were, what was happening?

BRIAN AVERY: Yeah. It was in Jenin in the West Bank and we were — I was working with the international solidarity movement at the time. And at the time, there was a curfew in the town, which was not very uncommon. It was very usual for us to be out on the streets during the curfew. And this was the case. At the time, it was in the afternoon, there had been some gun fire in the area and once that was quieted down, we went outside to go see if there was any of the local medical emergency teams that needed assistance, which was some of the groups we worked with the most in that area because they were often harassed and prevented from doing their jobs by the Israeli military a lot. And [inaudible] just a routine situation. We went out and, you know, we weren’t two blocks from our apartment when an Israeli convoy of two vehicles, a tank and an armored personnel carrier, drove up the street from the direction that we were walking from. And so as we heard them coming closer, we stepped off to the side of the road to let them pass by, which was again, you know, a very, very typical situation for us to encounter the soldiers. even during the curfew, and for them just to pass on by, you know, really without taking much notice of us. And so we stood to the side of the road, we put our hands out to show we didn’t have any weapons and weren’t, you know, threatening them in any way. And I was wearing a fluorescent vest to, you know, try to make ourselves as visible as possible. And once they drove within about 30 meters of where we were standing, they opened fire with their machine guns and continued shooting for a very long time, probably shooting about, you know, 30 rounds of ammunition, which is quite a lot when you see them in action. And I was struck in the face with one of the bullets and, you know, was knocked to the ground immediately. And as soon as the soldiers finished shooting [inaudible], another I.S.M. member, Tobias Karlsson, standing right next to me and there were four others who were close to the scene who were able to witness the scene and once they finished shooting, they drove off.

AMY GOODMAN: Well, now William Schultz is here for Amnesty International. I’d like to — you did a — your organization did a report on some of these incidents. Your perspective?

BRIAN AVERY: Well, obviously Amnesty has grave concerns about these kinds of incidents, these kinds of attacks on civilians, the Rachel Corrie case, Brian’s case, and Amnesty has called for investigations of these cases. We want to see an independent look taken at these cases. We understand that Israel, of course, has the right to defend itself, but it also has to do so within the confines of international law and standards.

AMY GOODMAN: And, Brian, what was the response of the U.S. government to what happened to you? Did they in any way try to intercede or demand explanations from the Israeli government?

BRIAN AVERY: No. They did nothing of the sort. Basically, the State Department pretty much ignored it. And the contacts — the attempted contacts I had with Congressional representatives, they were very sympathetic to me personally, but publicly and politically they did not want to touch it. They, you know, were too afraid it would have negative effects on their political careers.

AMY GOODMAN: In fact, we’re coming up on the anniversary of the death of Rachel Corrie on March 16, who died in Gaza, was run over, was crushed by an Israeli bulldozer and there is a movement in this country also to put pressure on Caterpillar, which made the bulldozer that the Israeli military used. Brian Avery, final comment.

BRIAN AVERY: I guess, you know, I’d just like to see justice done and hope that, you know, in the process that a lot of people will begin to take a lot more aware of what Israel is doing in the territories, the fact that they are getting so much support from the U.S. government, so much — I should say uncritical support, in that, you know, it is an issue that can be changed and there are things that people can do about it, as long as they are willing to take an active role.

AMY GOODMAN: Brian Avery, thanks very much for joining us from Israel now, first time back since being shot in Jenin. And William Schultz, executive director of Amnesty International. Thanks very much for braving the weather today in New York, the snowstorm, and making your way into Democracy Now! studios. 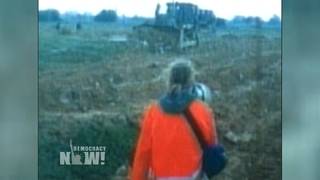