After nearly four years of struggle, a group of tomato pickers from Florida have claimed a decisive victory in their grassroots campaign against fast food giant Taco Bell.

The Coalition of Immokalee Workers is a farmworker organization made up largely of indigent immigrants who work tomato fields in southwest Florida. They called off a national boycott of Taco Bell this week after the company agreed to increase the amount it pays for tomatoes by a penny per pound, with the increase to go directly to workers” wages. Taco Bell also said it will help the farmworkers’ efforts to improve working and living conditions.

Farmworkers today usually earn 40 cents for each 32-pound bucket of tomatoes they pick, the same rate as 30 years ago. This means a farmworker has to pick two tons of tomatoes to earn about 50 dollars.

Also as part of the agreement, Taco Bell’s parent company–Yum Brands–announced it will help to ensure that none of its tomato suppliers employ indentured servants. In recent years the Coalition of Immokalee Workers helped federal authorities prosecute farm bosses in Florida for holding workers as slaves.

The four-year boycott has grown in recent years largely due to support from college students. Twenty-two colleges had successfully removed or blocked Taco Bell from operating on their campuses.

About 80 Immokalee farmworkers traveled to Louisville this week for the “Taco Bell Truth Tour”, stopping at 15 cities en route to bolster support for the boycott. The rally on Saturday is scheduled to go on as a celebration of the agreement.

Special thanks to * Austin Indymedia.*

AMY GOODMAN: We go now to Louisville to speak with Gerardo Reyes Chavez, a farm worker and member of the Coalition of Immokalee Workers. Also joined on the phone by Sean Sellers, the national co-coordinator for the Student Farm Worker Alliance. We did contact Taco Bell, but they were unable to join us on this program. Let’s start with Gerardo Chavez. How significant is this victory? Talk about what you demanded, and what you got?

GERARDO REYES CHAVEZ: Okay. First of all, good morning, Amy, good morning, Juan. Well, this represents a lot for us, as farm workers, because never in history there was a — basically a change of a corporation in the fast food industry, in terms of farm labor, the people, that is, on the bottom. They got — having — suffering a lot of bad treatment and receiving miserable wages for so long. So it represents a lot. It represents a first step in order to change the conditions for farm workers, for immigrants in this country, especially in the agricultural system.

JUAN GONZALEZ: And Gerardo, about how many workers altogether will be affected by this?

GERARDO REYES CHAVEZ: We are calculating that around 1,500 workers are going to be affected directly by the penny per pound. And, this number is going to increase in the future, because we are seeing for the future, as you know, Taco Bell is part of Yum Brands. Yum Brands the largest fast food industry in the planet. They’re willing to use their power not only to demand cheap tomatoes but to demand tomatoes that are being picked under fair conditions. And it sets an example for other corporations to do the same thing. The people in this country are expecting that change to happen, so it sets a precedent that others can follow and that the people want to see. So, what we are seeing right now is just the beginning of something bigger.

AMY GOODMAN: I wanted to ask Sean Sellers, one of the major student organizers how you organized this campaign? I mean, this is an extremely significant victory. You were going to have a major protest rally with the boycott and now, Taco Bell and its parent company, Yum Brands, have agreed to the demands. How did you do it?

SEAN SELLERS: First of all, thanks for having us on the show. It’s a tremendous victory, as you stated. The principles that this campaign ran on were very decentralized. Basically there were students and young people across the country that had taken this issue on. They were making it unworkable for Taco Bell to do business in their community or on their campus. One of the key things about the student campaign was going after Taco Bell’s branding. Taco Bell spends up to $220 million on a single advertising campaign, and their target market is 18 to 24-year-olds. Though the message that was the heart of the boycott for young people was that as your target market, we’re not going to buy food that’s produced in sweatshop conditions and possibly conditions of modern-day slavery.

JUAN GONZALEZ: Well, there was a statement by Democratic Congressman, George Miller, of California, who hailed the settlement. He said in a statement yesterday quote, “almost 150 years since its abolition, slavery persists on farms and in sweatshops around this country. This agreement strikes a blow against such egregious abuses of workers, but much more must be done.” Gerardo, can you talk about this whole issue of indentured servitude and what it means, and I think that Miller is also introducing a bill around this this year?

GERARDO REYES CHAVEZ: Yeah. Basically, slavery is something that is still happening in agriculture, and the reason is that the agricultural industry is one of the most backwards industries. So in a normal situation, we have to pick two tons of tomatoes to earn $50. Most of the time, it is an impossible task. We don’t have any kind of benefits or protections. We don’t have the right to organize in most of the states in this country, so it is basically the conditions that we face are conditions like a sweatshops, but in the fields, and here in the United States. We see that slavery is the result of these conditions. These conditions are ground zero for slavery to flourish. We have — we brought five different cases of slavery to federal courts, assisting the F.B.I. in working with the Department of Justice in order to prosecute them. Over 1,000 farm workers were liberated. There are a lot of bosses that are now in jail. But for as a solution — is not going one case after another, because this is not going to change anything. What is going to change all of these situations of slavery is going to be changing the sweatshop conditions that exist right now. That’s why this victory is very significant, because with this victory, we are using the power that corporations like Taco Bell and Yum Brands have over the agricultural industry to make them change the way that they are treating the workers and to make possible for changes to exist in terms of treatment and the working conditions, besides the penny more per pound. So that’s something that would help to disappear the conditions of sweatshops that we have been facing.

AMY GOODMAN: On that note, I want to thank you both very much for joining us. We’ll have links to your site. Just final clarification. Have you called for an end to the boycott of Taco Bell?

SEAN SELLERS: Yes. The boycott’s over.

AMY GOODMAN: The boycott’s over. Sean sellers, co-coordinator for the Student Farm Worker Alliance and Gerardo Reyes Chavez, farm worker, member of the Immokalee Coalition of Farm Workers, thanks for joining us. Thank you very much to Austin Indymedia.org for the footage. 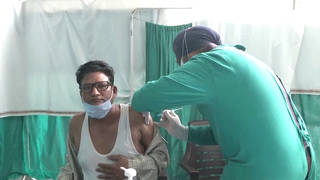