With Exxon Making a Record $5 Million Per Hour, a Look at Bush’s Energy Policies Ahead of His State of the Union

In tonight’s State of the Union address, President Bush is expected to outline a set of energy proposals that administration officials say will address growing public anxiety over high energy costs. This will follow Exxon Mobil’s recent announcement of making the biggest annual profit ever earned by a U.S. corporation, drawing the criticism of consumer groups. We speak with Steve Kretzmann of Oil Change International about their report titled, “Crude Designs: The Rip-Off of Iraq’s Oil Wealth” and Bush’s upcoming address. [includes rush transcript]

Last year Americans were hit with the biggest jump in energy prices in 15 years. A survey this month by the Pew Research Center found eight in ten Americans see high gasoline prices as one of the leading economic problems in the country.

In tonight’s speech, the President is expected to address the U.S.’ growing dependence on foreign oil by promoting a greater reliance on nuclear energy. The White House is set to launch a $250 million dollar initiative to reprocess nuclear fuel. Supporters say the move could relieve a dangerous build-up of nuclear waste that could serve as a target for a terrorist attack

JUAN GONZALEZ: Joining us in our Washington studio to discuss the energy policies Bush is expected to outline tonight is Steve Kretzmann, Executive Director of Oil Change International. The group recently released a report called “Crude Designs: The Rip-Off of Iraq’s Oil Wealth.” The report argues that Iraqi oil policy has guaranteed massive profits to foreign companies through awarding them with secret contracts. Welcome to Democracy Now!

STEVE KRETZMANN: Thanks, Juan, glad to be here.

JUAN GONZALEZ: Well, your reaction to the report of ExxonMobil’s new profit figures?

STEVE KRETZMANN: Well, it’s just more of the same from the industry that we’ve seen over the last few years. I mean, these are record profits that have continued to go up and up. It is shocking, and it’s really just sort of the latest evolution in the world’s most profitable industry at this point. You have Exxon now becoming the most profitable corporation in the history of the United States. Meanwhile, if you actually are to graph the price of gas for all of us at the pump versus the profits for the oil industry, these are two curves that go up completely parallel. So, what we’re seeing is the industry is finding new and ever more inventive ways to pass on costs to the consumers while they are pocketing more and more profits and they are investing, particularly in Exxon’s case, less and less in any kind of alternative energy that’s actually going to solve the problem of oil dependence in a long run. So, it’s a huge problem, and the industry really needs to be taken to task.

JUAN GONZALEZ: In your report on oil in Iraq, could you give us some of the details?

STEVE KRETZMANN: Sure. What is emerging in the way that Iraqi oil contracts are being structured is that they’re using a form of contract called the production sharing agreement. And this form of contract is actually very clever, has been developed by the industry over the last several decades as a way of dealing with the sentiment in oil-producing countries of nationalism, and so it actually technically retains ownership of the oil in — in this case with the Iraqi government. However, it puts in so many stipulations about how that oil can be used and how much profit has to go back to oil companies, etc., etc., that effectively it really minimizes the amount of money that can go to the Iraqi people and maximizes the amount of money that will go to Western-Northern oil companies who are extracting that oil. And what we’re really seeing here is that it’s likely over the next several decades that what this form of contract will mean is essentially $150 billion less for the Iraqi people in the long run. So it’s a huge problem.

STEVE KRETZMANN: Yeah, I mean, asking George Bush to tackle energy independence is like asking Jack Abramoff to tackle corruption. This is a man who has actually received more campaign contributions from the oil and gas industry over his career than has any other politician operating in the United States today, and it’s worth noting that number three on that list is Tom DeLay.

What we really need to see here in order to break from these — you know, this continued dependence on fossil fuels is what we’re calling a separation of oil and state. We need politicians to stop being in the pockets of the oil industry. We need to stop seeing big corporate giveaways to the industry. I mean, here we have the most profitable industry in the United States, the most profitable corporation, ExxonMobil, and yet this fall, the Congress, at the urging of the President, just passed the new energy bill which gives away four billion more of our tax dollars to the oil and gas industry. When is this going to stop?

JUAN GONZALEZ: We’re speaking with Steve Kretzmann, Executive Director of Oil Change International. As you mentioned, those giveaways that Congress voted came just before the big spike in oil prices that occurred right around the time of the Katrina disaster. Any thoughts on the level of windfall profits that were involved for these oil companies from the Katrina disaster?

STEVE KRETZMANN: I don’t have those figures off the top of my head, but they’re huge. The oil industry has successfully profited off of this, off of the backs of victims of Katrina and passed the costs on to us as consumers. I mean, we can see that in the spike of prices that happened, and we can see the fact that their fourth quarter earnings continued to go up and up and up. So it’s not as if these industries are suffering in any great way. You know, it’s the way the industry has done business for a long time, and they’ve gotten increasingly good at it recently, about passing on costs to the consumers and maximizing their own profits.

They do — you know, in the wake of Katrina, they talked a lot about the disruptions to the supply that happened because of refineries being taken out along the Gulf Coast. Well, the reality is a lot of that happened because there had been conscious decisions on the part of the oil industry over the last several years to minimize the amount of on-demand stock they have of oil and therefore maximize their dependence on market and meeting that demand on a rolling basis, so that any disruption in supply is going to be much more — is going to be much more severe and much more quick to be passed on to the consumer. So that’s a real problem.

We really need to see some kind of a windfall profits tax here. I mean, here we have $10 billion in the last quarter from ExxonMobil, $36 billion over the last year. And where’s that going to? ExxonMobil is, you know, going to put it into bonuses for their top executives, as well as looking for more oil and gas, which is driving the same problem again and again and again. We really need a windfall profits tax here that’s actually going to establish a fund go back into alternative energy and to really get us out of this problem of oil dependence in the first place. You know, and the idea that George Bush can do this in any substantive way with good language tonight, I think, is ludicrous. We’re seeing — several years ago, he talked about the “Freedom Car Initiative,” that would be — he was talking about hydrogen power. Well, that has gone absolutely nowhere in the time since he’s talked about that, and it’s widely viewed as just a token gesture. 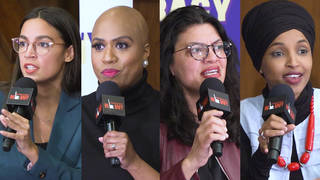