Special prosecutors in Chicago have released a major report confirming that African American men have been systematically tortured inside the Chicago prison system. We speak with one of the lead attorneys in the case and a torture survivor. [includes rush transcript]

We take a look at torture and brutality here in the U.S. For nearly two decades an area in Chicago’s city jails known Area 2 was the epicenter for the systematic torture of dozens of African-American males by Chicago police officers. Close to 150 people say they were subjected to abuse including having guns forced into their mouths, bags places over their heads, and electric shocks inflicted to their genitals. Four men were released from death row after government investigators concluded torture led to their wrongful convictions. Yet to date no police have been charged with any crime.

Well, yesterday the findings of a four-year investigation into the cases were released. The investigation found evidence that several officers in the department tortured criminal suspects but concluded that they cannot be prosecuted because too much time has passed.

AMY GOODMAN: We’re joined by Flint Taylor and David Bates. Flint Taylor is an attorney with the People’s Law Office in Chicago, represented many of the torture victims, was directly involved in spearheading the special prosecutor’s investigation. And David Bates is one of the men to come forward with the allegations of torture.

Let’s begin with Flint Taylor. Can you assess for us this report that has — well, we last talked to you — what was it? — a month or two ago. The report had been done, but wasn’t being released to the public. Many were trying to suppress it for good.

FLINT TAYLOR: That’s right. You want me to talk about the report? It’s a very — it’s kind of a mixed bag in the sense that the evidence was so strong that the special prosecutor found that over half of the 148 people that said they were tortured and abused were, in fact, that they believed they were. But they used the legal out of saying it wasn’t beyond a, quote, “reasonable doubt.”

They also found, very interestingly, that there was a high governmental cover-up of the torture, the criminal torture, which they found it to be, of one victim, Andrew Wilson, in 1982. However, what makes it a whitewash at the political level not only is the fact that they did not indict anybody, but they did not condemn the people who were truly responsible for the whitewash and the cover-up that occurred in the Andrew Wilson case. In other words, Andrew Wilson, what they say, was criminally tortured in 1982. They say that the higher ups, the police superintendent, was aware, which he was, of the torture, and he did nothing about it.

The reality is, what he did do and what the report in fact whitewashes is that he wrote a letter directly to the Mayor of the — at that time the State’s Attorney of the County of Cook, Richard Daley, who’s now the mayor — and directly asked him to investigate criminally. And the Mayor, Richard Daley, and his first assistant, Richard Devine, who is now the Cook County State’s Attorney, did nothing. But they give Daley and Devine, the ruling powers here in the city of Chicago, a complete pass and blame Richard Brzeczek, who is now a private lawyer, the former police superintendent, for not only covering up the torture of Andrew Wilson, but what follows, which is David Bates and 55 — many of those 75 men, who they found had been tortured, wouldn’t have been tortured if, in fact, there was action in 1982.

So what we have here is a report, which, de facto, sets forth the predicate for the indictment — politically, at least — of the Mayor and the State’s Attorney of Cook County for failing to prevent this torture, and yet blames a subordinate police superintendent.

AMY GOODMAN: And the police have —

AMY GOODMAN: And the police official in charge, Jon Burge, talking about — admitting that this happened, that people were tortured, but that they will not be prosecuted.

FLINT TAYLOR: That’s the other thing that’s outrageous about the whole thing, is we see now that there is a blueprint that’s been developed in various cases for prosecuting people for perjury, for obstruction of justice, when in fact they’re able to cover things up for so long and avoid prosecution until the, quote, “statute of limitations” has run on the acts themselves, that being the torture, etc. If you accept the fact that there’s not a continuing conspiracy, which we say there was, that starts with the torture and continues to this day in covering it up, if you just look at it in terms of obstruction of justice and perjury and racketeering violations under the RICO Act, there are still major statutes that you can prosecute under.

AMY GOODMAN: David Bates, we don’t have much time. Can you briefly describe what happened to you and then talk about what you think of the conclusion that they cannot prosecute people here?

DAVID BATES: Hi. October the 29th, 1983, for almost two days I was tortured, but not Jon Burge, but detectives under him, things such as a plastic bag being placed over my head in a couple of sessions. And I was slapped and kicked and punched. Derogatory terms. Threats. Threatened with killing me. And my whole point, my issue with this report, my issue with this whole thing is that there’s a concentration on Jon Burge, but Jon Burge did not torture me. It was people under him that tortured me, and there was not a concentrated effort to deal with those detectives under him.

And this is why this report is wrong, because it don’t deal with the victims. It acknowledges that we were tortured, but it doesn’t offer no type of remedy or recourse to deal with that torture. There is grounds for prosecution and evidence beyond anyone’s imagination, but there was not a course for action. And that’s where I think there was an error in spending over $7 million of county money to give us a $500 report that I could’ve did in high school.

AMY GOODMAN: David Bates, I want to thank you for being with us. And, Flint Taylor, does it end here?

AMY GOODMAN: We have ten seconds.

FLINT TAYLOR: We’re going to go to the U.S. Attorney. We’re going to demand that there be federal prosecutions and, in fact, reparations for people like David Bates, and to deal with all the cases that are pending in civil court; and we’re certainly just —

DAVID BATES: And we’re going to the streets, too.

FLINT TAYLOR: We certainly are.

AMY GOODMAN: We will leave it there and certainly cover the developments. David Bates, I want to thank you for being with us, and Flint Taylor, both from Chicago. And we’ll post the report on our website at democracynow.org. 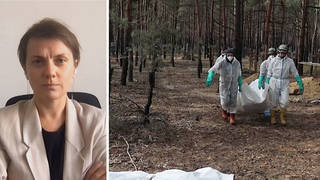