On Saturday, friends and family of the murdered journalist Brad Will are gathering in New York at St. Mark’s Church to mark the first anniversary of his death. At the time of his death, Brad Will was covering the popular uprising in Oaxaca, Mexico. The alleged executioners were identified as two members of the local city hall, two municipal police officers and the former justice of the peace of a nearby town. But to date no one has been held accountable for his death or the murder of any other activist killed in Oaxaca last year. We speak to investigative reporter John Ross from Mexico City. [includes rush transcript]

JUAN GONZÁLEZ: On Saturday, friends and family of the murdered journalist Brad Will are gathering in New York at St. Mark’s Church to mark the first anniversary of his death. At the time of his death, Brad Will was covering the popular uprising in Oaxaca, Mexico. In his last dispatch from Oaxaca, the Indymedia reporter wrote about a demonstrator named Alejandro García Hernández who was killed on the barricades. Will wrote “one more death… one more martyr in a dirty war… one more time to cry and hurt… one more time to know power and its ugly head… one more bullet cracks the night.”

On October 27th of last year, Will died at those same barricades. He had his video camera in his hand. His camera kept recording even after he was shot.

[Footage from Brad Will’s camera of his shooting.]

JUAN GONZÁLEZ: Brad Will died as he was being taken to the hospital. He was 36 years old. One day after he was killed, the Mexican daily El Universal published photos of the alleged executioners. They were identified as two members of the local city hall, two municipal police officers and the former justice of the peace of a nearby town. All of the men had ties to the Oaxacan government led by Ulises Ruiz. Initially the men were detained, but they were soon let go. Since then, no one has held been held accountable for his death or the murder of any other activist killed in Oaxaca last year.

Investigative reporter John Ross joins us on the phone from Mexico City. Earlier this year Ross published a 5,000-word report probing the circumstances of Brad Will’s death. It was published in over two dozen alternative newsweeklies in this country. John Ross has been covering Mexico for several decades. His latest book is Making Another World Possible: Zapatista Chronicle 2000-2006. Welcome to the Democracy Now!, John.

JOHN ROSS: Hi. How are you doing, Juan?

JUAN GONZÁLEZ: Well, talk to us about the — that investigation that you did into Brad Will’s death.

JOHN ROSS: Basically, what I did was a re-creation of Brad’s death and his time in Oaxaca. He had been here for months. And so, we did what we do. We interviewed all the principals. We found out that the police officers, the five plainclothes police officers — there’s four shown in the picture and one’s crouching down behind another — are all identified and working out of the Santa Lucia police station. This didn’t happen in Oaxaca City, but right outside of Oaxaca City. And they’re at work. And we’ve not been able to interview them; they’ve been dodging us for a while. If we take a look at the picture, the person that has the long gun on the extreme right, facing us, who’s name is Juan Martinez Soriano, otherwise known as the “Chapulin,” he seems to not be in Oaxaca at this point, but the other police officers are there.

And what’s even more, I think, remarkable and depressing is that, in fact, the government of the United States, the State Department, the U.S. embassy in Mexico City, under the direction of Tony Garza, have failed to make any kind of move on this case, find any kind of a pressure to either Felipe Calderón or to Ulises Ruiz, the governor of Oaxaca. And, in fact, if we take a look through the communiqués from the embassy since Brad was killed last October 27th, there is only one op-ed piece that Tony Garza wrote for Millennio, a daily newspaper here, about a month after Brad’s death, and that is all that the embassy has done. And they have failed to move on this case.

JUAN GONZÁLEZ: And this, obviously, is only a reflection of what has happened in terms of any kind of justice for the abuses that occurred in Oaxaca. Obviously, that whole period of the strike in Oaxaca galvanized many people around the world. What’s happened in the aftermath for all the other people who suffered abuse, beatings, or were shot?

JOHN ROSS: Well, we still have no investigation of the 26 people that were killed during that period, no investigation by the Mexican government, federal or local. There have been many investigations made by human rights organizations. I count everything from the OAS to the European Civil Commission that was here. We had Amnesty International; actually, Irene Khan, the Secretary-General of Amnesty International, was in Oaxaca, presented their report to the governor, to Ulises Ruiz. Virtually every major human rights organization has visited this case and this place. And yet, there’s no movement on the part of Mexican government.

In the article that I published in August, I laid out some reasoning behind why that hasn’t happened. And I think, really, it has a whole lot to do with a political arrangement between the party of Felipe Calderón, the National Action Party, and the old ruling party and the party of Ulises Ruiz, the Institutional Revolutionary Party, the PRI, that have struck a deal to pass in legislation, and indeed if the governor and its local officials were pressed to resolve this case, in fact, the PRI would be disaffected and would not support the legislation that the PAN has been putting forth. That legislation ranges from fiscal reform to actually opening up the national oil corporation, Pemex, to private investment. And I’m not alone in thinking that the political deal is what has put this case into the cold case file.

JUAN GONZÁLEZ: And, John, I’d like to ask you on another matter, the announcement by President Bush of Plan Mexico, a $1.4 billion program supposedly aimed at eradicating drugs. Could you talk about that and its impact on the country?

JOHN ROSS: Well, I would say that — you know, I would say that if Ambassador Tony Garza had put as much energy as he has into promoting Plan Mexico into coming up with the killers of a U.S. citizen that photographed his own death in Mexico, we might have some resolution here. There’s been a kind of full-court press here on the part of the embassy, part of the State Department and part of the United States government, and part of the government of Felipe Calderón, to come together around this plan.

Plan Mexico, it’s a carbon copy of Plan Colombia, without troops on the ground. But that also opens up the question about, will there be what we call private security corporations taking over the job of training Mexican drug fighters here? It’s interesting to me that there’s been one statement after another by both the Calderón government and the U.S. government that, no, we’re not going to put any U.S. troops on the ground here. That’s a political no-no here; you can’t do that. The U.S. has invaded Mexico eight times, and it’s not going to fly. But putting folks like Blackwater on the ground is another question.

And it’s, I think, important to understand that Blackwater is now six miles away from the Mexican border at Potrero, California, setting up a training camp and has just been awarded a Department of Defense — part of a $15 billion Department of Defense drug war grant, which mandates them to train foreign drug fighters and to provide operation and logistical support on the ground. So I think we won’t see U.S. troops here on the ground, as a result of this agreement.

This is not passed by any congress here. It’s in the U.S. Congress, and it’s been part of a — it’s been kind of folded into the supplemental appropriation on Iraq and Afghanistan. And if the Democrats would stand up to that supplemental appropriation, we will indeed not see a Plan Mexico, because it won’t be funded. It’s part of that funding. So it is, I think, in the end, what Plan Mexico is, is a way of bringing Mexican security forces under Washington’s control, to fuse the security forces of both countries and place them under Washington’s control.

JUAN GONZÁLEZ: Well, John Ross, I’d like to thank you for being with us, a longtime independent journalist joining us on the line from Mexico City. He has written for decades with clarity and precision on the events in Mexico. 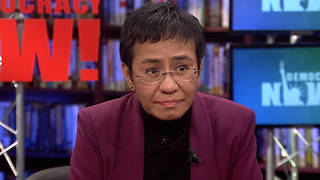