The oil spill has shut down over a dozen beaches and killed at least 60 birds. Ecologists warn that it could take months to clean up and that it threatens the Bay’s diverse ecosystem, including several endangered species. We speak to Sejal Choksi, program director at San Francisco Baykeeper. [includes rush transcript]

AMY GOODMAN: We are broadcasting from San Francisco, where a criminal investigation has been opened into the 58,000-gallon spill of heavy bunker fuel into the San Francisco Bay. The spill took place when a container ship slammed into the San Francisco Golden Gate Bridge Wednesday — the San Francisco-Oakland Bay Bridge. Coast Guard officials acknowledged on Friday that they had waited over four hours before notifying the public of the magnitude of the spill. They previously reported a leak of just 140 gallons.

The oil spill has shut down over a dozen beaches and killed at least 60 birds. Ecologists warn it could take months to clean up and that it threatens the Bay’s diverse ecosystem, including several endangered species.

Environmental organizations like Friends of the Earth and San Francisco Baykeeper have condemned the ecological impact of the spill and the slowness of the official response. They’re also calling for a ban on the shipping industry’s use of the heavily polluting bunker fuel, which they say is a thousand times worse for the environment than highway diesel.

We’re joined now by Sejal Choksi, who is the program director at San Francisco Baykeeper, which is an organization that aims to protect and enhance the water quality of the San Francisco Bay. She is the environmental representative to the California Office of Spill Prevention and Response Technical Advisory Committee. Thanks very much for joining us.

AMY GOODMAN: Talk about the enormity of what has taken place here in the last few days.

SEJAL CHOKSI: So, essentially what we’re looking at is the worst spill from a vessel in a decade into San Francisco Bay. So we’ve got 58,000 gallons of this bunker fuel that’s basically entered our environment. And because of the slow response from the agencies, it’s been allowed to essentially spread throughout the estuary, and this is a very sensitive estuary, so we’re really concerned.

AMY GOODMAN: How did the ship hit the bridge?

AMY GOODMAN: Explain what bunker oil is, why they were carrying it. They were going to South Korea?

SEJAL CHOKSI: Yes. Bunker fuel is essentially the fuel that cargo ships use in order to move, to facilitate their fueling. And so, the bunker fuel is actually one of the dirtiest and most polluting types of fuel. It’s essentially what’s left from the refining process. It’s kind of a waste product almost. So it ends up being one of the heaviest and one of the dirtiest types of fuel, and it contains pretty toxic chemicals, like polyaromatic hydrocarbons, and those include naphthalene and benzene. It also ends up having a lot of heavy metals like mercury, and these contaminants get into the water and essentially have carcinogenic impacts, as well as developmental and immunological impacts on the critter that are in the estuary.

AMY GOODMAN: You’re calling on Congress to ban the bunker oil from being used or transported in this country?

SEJAL CHOKSI: Yeah, exactly. What we believe is that if these vessels were not using this type of toxic fuel, then when these types of accidents happened, we wouldn’t be in such a chaotic situation at this moment. So if they were to ban the use of this type of fuel, the vessels would have to use a different type of fuel, and that would mean that it would be more environmentally safe. One of the other things about bunker fuel is that it is contributing to greenhouse gases, so —

SEJAL CHOKSI: When it is burned as fuel, it gives off a lot of the really horrible chemicals and pollutants that are contributing to greenhouse gases, because it is one of the dirtiest types of fuels.

AMY GOODMAN: Explain how this spill has affected the Bay. What’s happened to the birds, to the ecology of the area, and what you foresee happening?

SEJAL CHOKSI: So, it’s had a pretty huge impact. Baykeeper patrols the Bay and has patrolled the Bay for the last five days since the spill. And every day that we are out, we have noticed an oily sheen on the water in almost every location that we’ve been. And in certain locations, we’ve seen that every two or three inches there are huge globs, about, you know, orange- or grapefruit-sized globs, of bunker fuel just in the water. And we’ve witnessed harbor seals and sea lions actually swimming through those globs of fuel.

We’ve also noticed birds that are landing in it and getting covered in it, essentially. So the latest numbers are actually showing that over 200 birds have been captured that have this oil all over them, and that essentially causes a multitude of problems for the birds. It can cause them to lose their thermal protection. It can also cause them to be smothered and drown, so essentially they can’t fly away. And it can also cause them to ingest the oil, because through their preening they’re trying to clean it off of themselves, but they end up ingesting it. And so, that can be toxic and harmful to the birds, as well.

AMY GOODMAN: Are there things people can do to help? I’ve been reading a lot of articles about just the overwhelming response just by citizens in the Bay Area, but not being able to get involved, asking if they can help.

SEJAL CHOKSI: Right. The outpouring of support has been astonishing. We’ve had over 4,000 people contact Baykeeper itself just to find out how they can help. And what’s really been unfortunate is that the agencies’ response has been: “Please stay away from the beaches. We don’t need your help. You will be getting in the way of our cleanup efforts.” And so, up until today the agencies have basically been turning people away.

And instead, what they’ve been doing is spending their resources citing and arresting people who have been trying to do cleanups kind of unofficially. And we’ve thought that that was a waste of time, so we’ve been pressuring the agencies to actually provide hazardous materials trainings, so that people who are really interested in getting out there can actually help make a difference. And so, as of today, they will be providing some minimal training to some volunteers. So hopefully we can help with this cleanup effort.

AMY GOODMAN: How will it affect fish like the herring?

SEJAL CHOKSI: Essentially, we’re looking at impacts for decades. Polyaromatic hydrocarbons are some of the most toxic and contaminating pollutants that basically don’t degrade. They remain in the environment for a very long time, especially in an aquatic environment. So we’re essentially looking at a very contaminated environment for just decades to come.

AMY GOODMAN: Are there things people can do outside of the Bay Area around this issue, or are you focusing totally on Congress now simply to ban the use of bunker oil?

SEJAL CHOKSI: Well, I think the banning of this type of fuel can be a nationwide issue, and people can put pressure on Congress nationwide to do this. You know, one of the other things we could do is put pressure on Congress to require the use of double-hulled vessels. That’s already required for oil tankers in this country after the Exxon Valdez spill. But for these cargo ships, they don’t require double hulls. And if this ship that Cosco Busan had had a double hull, this accident would probably not have occurred.

AMY GOODMAN: Sejal Choksi, I want to thank you very much for joining us. Sejal Choksi is with the San Francisco Baykeeper. Thank you. 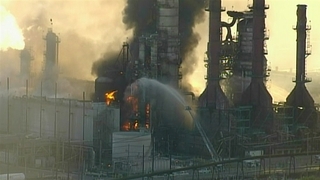 Chevron to Pay $2 Million for 2012 Refinery Fire in Richmond, CA; 200 Arrested at Protest