As the fourth anniversary of the Iraq approaches, a new study by Mother Jones magazine has found that the number of fatal terrorist attacks has increased by over 600 percent since the U.S. invasion. We speak with the study’s co-author, Paul Cruickshank. [includes rush transcript]

JUAN GONZALEZ: As the fourth anniversary of the Iraq War approaches, new concerns are being raised over the effect the war has had on global security. A new study by Mother Jones magazine has found that the number of fatal terrorist attacks has increased by over 600 percent since the U.S. invaded Iraq. The effect of the war has been felt from London to Kabul and from Madrid to the Red Sea. The study contradicts key claims by President Bush that the Iraq War has made the world safer.

PRESIDENT GEORGE W. BUSH: From the start, America and our allies have protected our people by staying on the offense. The enemy knows that the days of comfortable sanctuary, easy movement, steady financing and free-flowing communications are long over. The terrorist’s life since 9/11 has never been the same.

AMY GOODMAN: President Bush speaking at his State of the Union address last month. Paul Cruickshank is co-author of the new study, “The Iraq Effect: The War in Iraq and its Impact on the War on Terrorism.” He’s a research fellow with the Center on Law and Security at New York University School of Law. Welcome to Democracy Now!

Now, our study looked at two periods. It looked at the first period between 9/11 and the U.S. invasion of Iraq on March 20, 2003, and then the second period is the period afterwards. And we’ve seen these large rises in terrorism. These are simply the matrix that we’ve looked at.

JUAN GONZALEZ: Now, one question in terms of how you define terrorism, because obviously a large number of the attacks are coming in Iraq: Do you define it in terms of attacks on civilians, or do you also include attacks on soldiers, as well as American troops in Iraq?

PAUL CRUICKSHANK: Well, terrorism, as defined, is always attacks on civilians, obviously. A terrorist attack is an attack on a civilian entity. So we’re only looking at those attacks, and we’re only looking at attacks by Sunni jihadist groups, which are either directly related al-Qaeda or share their ideology. We excluded groups from Palestine. We were only looking at groups, which were very close to al-Qaeda, either directly or in terms of ideology, in terms of that anti-American ideology, which is obviously — the United States is extremely concerned about. So you’ve had remarkable rises in these terrorist attacks. And we only looked at fatal terrorist attacks. We didn’t just look at every old attack. We looked at the serious ones. And we see these very large rises.

Just to give you an example, in the Arab world there’s been a 445 percent increase in jihadist terrorist attacks since the Iraq War, and there’s been a 783 percent increase in fatalities. There have been 12 attacks in Saudi Arabia since the war in Iraq; in the period before that we considered, there were none. There has been a wave of attacks in Egypt. In confessions of those perpetrators, of people who attacked those targets in the Red Sea areas in the last few years, they’ve said, “The war in Iraq was our main motivating factor. We wanted to punish Westerners for the actions over there.”

AMY GOODMAN: Paul Cruickshank, you write that there are, just in 2006 alone, 118 suicide attacks in Afghanistan, more than in the entire history of the country. What relation do you think those attacks have to the war in Iraq?

PAUL CRUICKSHANK: Well, that’s an excellent question. You know, certainly the suicide terrorism in Afghanistan has gone through the roof. And if you look at when the Taliban terrorist campaign starts in Afghanistan, it really gets going in September 2003. And, you know, this isn’t in 2001, it’s not in 2002, when U.S. troops were already there. They start attacking civilian entities, Afghan police entities in September 2003. That’s after the U.S. invasion of Iraq.

And what basically happened is that they were inspired in part by Iraqi jihadists launching a campaign there. Now, the tactic that worked remarkably well for Iraqi jihadists attacking civilians, attacking the U.S. there was suicide bombing. And so, you know, you have Afghan internet sites based in Peshawar, Pakistan, which say, “Look, guys, we need to copy the tactics that you’re using in Iraq. We need to export these to Afghanistan.” And so, it was a very consciously thought out strategy to use suicide attacks — also remarkably that a higher increase of improvised explosive devices in Afghanistan, too. And so, what we found is the Iraq War, that the jihadist experience in Iraq of fighting the best army in the history of the world, the U.S. Army, has sort of allowed them to pioneer new tactics, which are being exported elsewhere. There has been evidence that Taliban fighters and Pakistani militants, as well, they’ve even traveled to Iraq to get what one Pakistani journalist observed as on-the-job training: going to train with Zarqawi, coming back to Afghanistan and using their terrorism savoir-faire to launch new attacks there.

JUAN GONZALEZ: And in terms of this — obviously in Europe and the United States, an enormous amount of money has been spent in building up protection against terrorism and security, and the Bush administration is always saying, hey, we haven’t had another attack since 9/11. What’s your sense of the difference between what’s going on in Europe and the United States and the rest of the world?

Osama bin Laden in January 2006, he released an audiotape, and he responded directly to President Bush’s assertion that the war in Iraq was diverting al-Qaeda from its central purpose of attacking the United States. Osama bin Laden said this, he said, “It’s not diverting us. We’re still absolutely determined to attack the United States. And actually, the war in Iraq has given us more recruits.” And he said, you will expect — you know, “We are plotting an attack against you right now.” Just last summer you had an airline plot based from London, which could have killed thousands. And that was perhaps the operation he was referring to. So there still is a threat to the United States.

PAUL CRUICKSHANK: “What about Saudi Arabia?” is your question. Well, clearly, you know, Saudi Arabia is probably the country which will suffer most from the blowback from Iraq. You know, it borders Iraq. A lot of its young citizens have traveled over to Iraq to fight there and will eventually come back. They’re already making dozens of arrests. They’re very, very worried. Saudi officials told us they’re very worried that there will be huge blowback in Saudi Arabia, there will be a wave of new terrorist attacks in the kingdom. They’re trying to get ready for that. And so, there’s large concern in Saudi Arabia over the impact of the Iraq War for them.

AMY GOODMAN: All right, I lied. Last question, 10 seconds: What would an attack on Iraq mean for increased terrorist threats?

AMY GOODMAN: I want to thank you very much for being with us, Paul Cruickshank, fellow at NYU Law School Center on Law and Security. And we’ll link to that new study at democracynow.org, “The Iraq Effect: The War in Iraq and Its Impact on the War on Terrorism.” 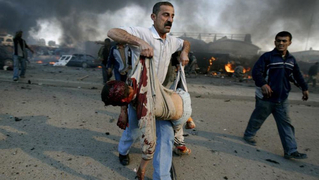