The court-martial of the first U.S. Army officer to refuse to fight in the Iraq War has ended in a mistrial. On Wednesday, a military judge halted the case against First Lieutenant Ehren Watada over possible inconsistencies in a pretrial agreement Watada made with prosecutors. Geoffrey Millard of Truthout.org reports from Fort Lewis in Washington. [includes rush transcript]

JUAN GONZALEZ: We turn now to the court-martial of U.S. Army First Lieutenant Ehren Watada. He is the first officer to refuse deployment to Iraq. On Wednesday, the Army judge declared a mistrial. Geoffrey Millard of Truthout.org filed this report from Fort Lewis in Washington.

GEOFFREY MILLARD: On the start of day three of the Lieutenant Ehren Watada court-martial, no one could have predicted a mistrial, but instead of Lieutenant Watada taking the stand, that is exactly what happened. Immediately after the judge’s decision, the Army held a press conference, trying to make sense of the day’s events.

JOE PIEK: This afternoon, the military judge presiding over the general court-martial of First Lieutenant Ehren Watada declared a mistrial. Earlier today, the judge rejected a stipulation of fact that had been signed during pretrial negotiations by both the prosecution and defense. As a result, this case could not go forward, because the parties were relying on evidence that was contained in that stipulation of fact.

LT. COL. ROBERT RESNICK: It appears from what was presented in court today that both the defense and the prosecution agreed to those sets of facts and that that set of facts, that agreement that they had, still allowed for the defense and the government to present additional evidence or argument on defense’s and other issues. The military judge was concerned, however, that the way that the stipulation was written amounted to Lieutenant Watada confessing to that offense of missing movement, when it was clear his intent was not to do that. Basically, all stipulations of fact are agreements between the parties of a certain list of facts that they agree are true and will be uncontroverted in trial, so it could be any fact that they, or course, reach agreement upon. What becomes confessional about that is if, within the stipulation of fact, all of the elements of a particular offense are covered in the stipulation, meaning without pleading guilty you have an accused who basically is admitting all the elements of an offense without pleading guilty.

GEOFFREY MILLARD: The defense and their supporters saw things differently and held a separate press conference to explain their point of view.

ERIC SEITZ: In this case, it is my professional opinion that Lieutenant Watada cannot be tried again, because of the effect of double jeopardy. Our hope is at this point that the Army will realize that this case is a hopeless mess. The first motion we file when they attempt to bring this case back will be a motion to dismiss with prejudice, based upon double jeopardy. And if that motion is not granted, we will immediately take an interlocutory appeal, because we believe that even the military appellate courts will agree with us that the circumstances under which the judge acted today were an abuse of his discretion and that there was no justification whatsoever either for the subject inquiry to be brought up in the manner in which it was, for the additional inquiry of Lieutenant Watada in which he elicited statements which he then purported to utilize to criticize and withdraw the stipulation of facts to which the government and the defense had agreed last week, when two of the charges were dismissed in return for our agreement that we would stipulate to facts to avoid the necessity for reporters to testify. We are now in a position, because of the government and rulings by the court that we think are erroneous and will have the consequence of ending these proceedings altogether.

ANN WRIGHT: As attorney Eric Seitz said, the government’s case, the Army’s case against Lieutenant Watada is a mess. And this case reflects the mess that the administration is in in Iraq also.

CAROLYN HO: I just want to say that I continue to remain very hopeful that my son will be exonerated. He has committed no crime and, I believe, should not be punished.

ERIC SEITZ: I don’t know what the judge is talking about. This stipulation didn’t change from last week, when we ran it past the judge and he approved it. It didn’t change from Monday, when he went through it in detail, line by line, with Ehren and then approved it. And it didn’t change from yesterday, when he went through it again, because he had some issues about it. The judge acted on his own for his own reasons, and I frankly don’t understand any more than the government counsel does what his thinking was or what his legal basis was, because I don’t believe there was any.

GEOFFREY MILLARD: Eric, is this a victory for you with the mistrial?

ERIC SEITZ: We think it may become a very significant victory, depending upon what happens between now and the next time we go back to court. My firm belief professionally is that the consequence of granting a mistrial over our wishes means that because jeopardy attached, so the case cannot be retried. I don’t know that the judge realizes that. I’m not sure that government counsel appreciates that or the spokespeople for the Army today, but in my experience and based upon my professional judgment, there is a very strong likelihood that they cannot retry this case. And if it is in fact the end of this case, then, yes, that’s a very significant event and a terrific victory.

GEOFFREY MILLARD: It remains to be seen whether this will be a victory or a defeat for the prosecution or for the defense. This has been Geoff Millard reporting for Truthout.org from Fort Lewis, Washington. 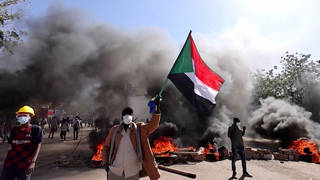