A British court has ordered the government of Zambia to pay the “vulture fund” company Donegal International $15.5 million. Donegal is owned by the U.S. company Debt Advisory International. But investigative journalist Greg Palast reveals a new development: Democracy Now!’s airing of his BBC expose on Donegal this year has led the Justice Department to open a bribery investigation that could lead to an indictment. [includes rush transcript]

GREG PALAST: Mr. Sheehan says it wasn’t a bribe. They were only trying to help the Zambian people.

MICHAEL SHEEHAN: We offered to donate debt to a low-income housing initiative, which was a charitable initiative, which did end up building over several thousand houses for the poor. You’re contorting the facts. You’re on my property, and I would ask you to step off.

GREG PALAST: We showed this to the current president’s adviser. He was not impressed.

AMY GOODMAN: An excerpt of Greg Palast’s piece. Now, a British court has ruled on the case: Zambia ordered to pay Sheehan’s company $15.5 million on its original $4 million debt. The Zambian government says the money will have to come directly from its budget for health and education.

BBC investigative reporter Greg Palast joins us now from a studio in Portland, Oregon, the author of a number of books. His latest just came out on paperback called Armed Madhouse: From Baghdad to New Orleans, Sordid Secrets and Strange Tales of a White House Gone Wild. Welcome to Democracy Now!, Greg, and can you talk about this ruling that came down today in Britain?

GREG PALAST: Yes. Glad to be with you, Amy. The ruling says that Zambia is now going to have to give up roughly half of all the value of debt relief granted by the U.S. and Western nations. This is money that was earmarked for AIDS medicine and education. So all this debt relief is going to be sucked up by this guy Michael Francis Sheehan, who otherwise is known as “Goldfinger.”

But, here’s the important thing, and this is exclusive to Democracy Now! Before “Goldfinger,” Mr. Sheehan, breaks open the champagne, what he does not know is that the United States Justice Department is now going to open an investigation into his payment, because the payment in the end was made, $2 million to the government, to influence their payment to him. He only put down $4 million, and they agreed to pay him $15 million after he said he would pay and did pay $2 million to the president’s so-called favorite charity — the ex-President Chiluba, who is now facing charges of corruption. So under U.S. law, that’s considered bribery, a violation of Foreign Corrupt Practices Act.

The Justice Department, after your report, or our report on Democracy Now! — as you know, John Conyers went directly to President Bush in the Oval Office, virtually kicked in the Oval Office door and said, “What are you going to do about this, and how come this guy isn’t being charged under U.S. law with bribery, as defined under the Foreign Corrupt Practices Act?” And the president said, “I’ll take care of it.” That was, in a week. That was months ago. But because of, I think, the weakness of Alberto Gonzales, the fraud division, which has contacted me because we at BBC have information that no one else has on these payments, that they are now free to actually go out and get bad guys. There’s no more political clamp on the fraud division against going after U.S. corporations trying to corrupt foreign governments. So this is, you know, this is frankly a direct result of the report on Democracy Now!

This may stop “Goldfinger” Sheehan from collecting the money on Zambia, because with the court judgment in the U.K., he’ll probably — his pattern is to then actually collect the money from the government’s bank accounts in the U.S. If he’s nailed for bribery, civil or criminal, he’s not going to be able to collect that money. So that’s — this is really a first for Democracy Now!

AMY GOODMAN: The British government, why is it ruling on this case?

GREG PALAST: Because this guy “Goldfinger” Sheehan had used a cut-out company Donegal, based in the British Virgin Islands, to try to get a judgment out of a U.K. court. They don’t have the strong anti-bribery laws that we have in the U.S. So the British court said, we can’t do anything about the fact that Sheehan may have gotten a hold of this debt through bribery, but it’s clear to us. And the court ruled in Britain that the structure of the company was set up deliberately to try to avoid prosecution under the U.S. law, under the Foreign Corrupt Practices Act.

And now, with Gonzales weakened, with the Democracy Now! report and the pressure from John Conyers, you may see an intervention by the U.S. government.

So what he does is he gets the judgment in Britain. He comes over to the U.S. and then tries to garnish the accounts of the Zambian government and the other governments, like the Congo government, that he has attacked. These people are called “vultures” by everyone, including Paul Wolfowitz of the World Bank, who in fact commented on the Democracy Now! report. So it caused quite a stir.

AMY GOODMAN: What did Wolfowitz say?

GREG PALAST: Well, he was saying that we have to do something about these vultures. You know, he’s trying to now develop his cred as being a real corruption fighter, which is a bit ironic, one would say.

AMY GOODMAN: And explain who Michael Sheehan is, an American.

GREG PALAST: He’s an American. And by the way, this is going to be a surprise to him that he’s under investigation now by the fraud division of the Justice Department, because I’m sure he was celebrating about an hour ago. Now, the smile might be wiped off his face.

Michael Sheehan is an investor. They call them “vultures.” And most of these vultures are big supporters of the Republican Party and George Bush. He and a group of others are buying up African debt at pennies on the dollar, like, for example, they bought up this $15 million in debt from Zambia for $4 million. They then use, whether it’s bribery, influence, political lobbying, legal threats, intimidation, to then squeeze these governments to pay the full amount once they are receiving debt relief from the United States government, the U.S. Treasury or from the European governments. So they’re basically taking this — what was meant to be contribution to help these governments pay for AIDS medicine, specifically, and education, specifically — they’re basically stepping in and seizing that money.

AMY GOODMAN: Greg Palast, we’re going to have to leave it there. I want to thank you very much for joining us. 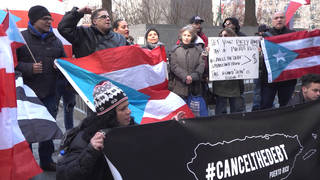