A pair of British men were sentenced to jail on Thursday for leaking a classified memo that revealed President Bush told British Prime Minister Tony Blair in April 2004 that he wanted to bomb the Doha headquarters of the Arabic television network Al Jazeera. They were convicted after a highly secretive trial. Davide Simonetti of the website BlairWatch joins us in London. [includes rush transcript]

JUAN GONZALEZ: A pair of British men were sentenced to jail on Thursday for leaking a classified memo that revealed President Bush told British Prime Minister Tony Blair in April 2004 that he wanted to bomb the Doha headquarters of the Arabic television network Al Jazeera. On Thursday, a former civil servant named David Keogh was sentenced to six months in jail for violating Britain’s Official Secrets Act. A former parliamentary researcher named Leo O’Connor was given a three-month sentence. They were convicted after a highly secretive trial. The British government maintained that the memo was so sensitive that most of the trial could not take place in public in the interest of national security.

AMY GOODMAN: The Daily Mirror newspaper first reported on the existence of the memo, but the British government has placed a gag order on other news organizations. To talk more about the memo, Davide Simonetti of the website, BlairWatch, joins us in London. Welcome to Democracy Now!

DAVIDE SIMONETTI: Thank you very much.

AMY GOODMAN: Explain exactly what you understand this memo to say.

DAVIDE SIMONETTI: Well, we have not seen the memo, so we can’t know exactly what’s on it at all, but what we understand from what we’ve read is an alleged plan by the President George Bush to bomb the Al Jazeera offices in Doha, after not being very pleased with some unflattering coverage. This is roundabout the time of the attack on Fallujah, of course. There’s also allegedly other stuff in the memo about the attack on Fallujah, and that also might have been deemed as sensitive in the court case.

JUAN GONZALEZ: And was this a proposal by President Bush to have the British bomb the headquarters or that the United States was going to do it and they wanted to get the viewpoint or perspective of Prime Minister Blair?

AMY GOODMAN: In February of 2006, Democracy Now! traveled to Doha to attend the second Al Jazeera Forum. During our Democracy Now! broadcast from Qatar, we spoke with Al Jazeera’s managing director, Wadah Khanfar. I asked him for his response to the 2004 memo.

WADAH KHANFAR: You know, I would say that I was at that moment in time, the bureau chief in Baghdad. So I was aware of the daily problems that we faced in our work in Iraq. More than 20 of our colleagues were detained at certain checkpoints. Some of them spent, you know, days in jail, actually, in very serious circumstances. Some of them were tortured in Baghdad.

The situation in Fallujah, we — it happened that we were the only team, the only crew, that we had — Al Jazeera had the only crew inside Fallujah reporting live, actually. I remember when Kimmitt made this kind of statement, he was in the box on our screen, the other half of the screen, the other box, was showing live images from the hospital of Fallujah, about civilians who had been killed. He was telling us that “You are fabricating the story. You are lying. You are not telling the truth,” you know, and the Arab world was watching what has been happening.

Now, of course, recently, a lot of media started to apologize about the misinformation regarding Fallujah and the fact that they were reporting incidents, or the attack on Fallujah from the embedded — embedded with the American side. So the situation in Fallujah, that was the issue.

AMY GOODMAN: That is Wadah Khanfar. He’s the managing director of Al Jazeera, when we spoke to him in Doha in Al Jazeera’s headquarters. Juan?

JUAN GONZALEZ: Davide Simonetti, I’d like to ask you about the difficulties that journalists have in Britain reporting on stories like this, when there is so much that the government does not permit you to discuss or write about in public.

DAVIDE SIMONETTI: Well, of course, it’s almost impossible. The Official Secrets Act, which our attorney general, Lord Goldsmith, invoked to stop the disclosure of the memo, that was just the beginning. I mean, in the papers today, we’re hearing that the judge is now — in the case of David Keogh and Leo O’Connor — is now imposing further gagging orders, that even stuff that was disclosed in open court can’t be discussed. There’s a real effort to stop anything of this story getting out, even though much of it is in the public domain.

AMY GOODMAN: You have, as a blogger with the website, BlairWatch, have said if you can get a hold of this memo, you are going to print it, in spite of the Official Secrets Act?

DAVIDE SIMONETTI: Yes, we will. We’ll do it with — not just on our own, but there are hundreds of bloggers that have agreed to do it with us, and also some mainstream publications have agreed to, as well. And I think if it was released like that, there wouldn’t be anything — there wouldn’t be anything much they could do about it to prosecute, if so many people — if it suddenly exploded into the public domain.

AMY GOODMAN: Davide Simonetti, Al Jazeera submitted a Freedom of Information application early 2006, requesting the disclosure of the contents of the memo, but their request has been denied. Finally, we just have a few seconds, but these two men, the men who now have been jailed, David Keogh and the member of Parliament researcher Leo O’Connor, who are they? They are in jail now.

DAVIDE SIMONETTI: Well, one is a researcher. One was an assistant. They seem to be used as — I wouldn’t say scapegoats, because David O’Connor [sic] did actually try to release this. But there’s other problems, as well. The MP Peter Kilfoyle disclosed the contents of the Al Jazeera memo to John Latham in the States. The MP, who is the boss of Leo O’Connor, also did this, allegedly, from what we’re reading. It seems that the government has picked on these two, because it would be embarrassing to start bringing charges against British MPs, members of Parliament.

DAVIDE SIMONETTI: Thank you very much. 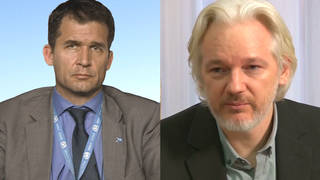