A bipartisan group of senators have proposed a bill that would allow undocumented immigrants to continue to work here if they fulfill a number of requirements, including paying a $5,000 fine and getting a biometric identification card. The bill would also established a guestworker program and increase security on the U.S.-Mexican border. [includes rush transcript]

JUAN GONZALEZ: A bipartisan group of senators has proposed sweeping changes to the nation’s immigration laws. The bill calls for increased security on the U.S.-Mexican border, the hiring of 18,000 more border agents and new requirements for employers to check the immigration status of employees. The bill would allow undocumented immigrants to continue to work here if they fulfill a number of requirements, including paying a $5,000 fine and getting a biometric identification card. The bill would also set up a point system to determine who merits a new type of visa. The Senate proposal would also allow up to 600,000 temporary workers to come to the United States each year.

AMY GOODMAN: Democratic leaders are calling the bill a compromise reached under difficult political circumstances. Several Republicans, including President Bush, have voiced support for the measure. However, many immigrant rights advocates are expressing concern. Some say the proposal would create a permanent underclass of immigrant workers.

STAN MARK: Thank you for having me.

AMY GOODMAN: Explain exactly the proposal, as you see it, and why you’re so concerned about it.

STAN MARK: I think it’s a radical departure from the current system, that uses family reunification as the cornerstone of immigration policy. It moves us away from equal rights for all working people and undermines the rights of citizens, lawful permanent residents, as well as people who are trying to get legal status. The citizens, under current law, can petition for their sons and daughters, married or unmarried, as well as people who are lawful permanent residents. This proposal eliminates those family preferences and undercuts a family reunification policy as the cornerstone, replaces it, in effect, with a flow of immigrant workers in the future — the number that Juan said, 600,000 per year — which would be people who would be part of a new underclass, people who would have less rights, less protections, would be subjected to downgrading wages and working conditions and another bracero program, similar to the ones in the ’40s, ’50s and ’60s that was characterized as legalized slavery by Lee Williams, who was head of the Department of Labor at the time when this program was terminated.

There are also other problems. I mean, some of the things that you should be aware of is that there’s resources being allocated before any of the temporary workers or any of the visas for people to legalize themselves over a period of many years, resources allowed to imprison or detain people — 27,500 aliens per day on an annual basis —- that is part of the proposal, which -—

AMY GOODMAN: — people to be imprisoned a day?

STAN MARK: Per day. Resources to detain up to that number per day on an annual basis. That means that there’s an intent to round up as many people who are undocumented or suspected of being undocumented and detain for — you know, in massive camps or massive — we don’t know the full impact of that. But basically the framework that I’m trying to put forward is that there is no equal rights for immigrants or their citizen petitioners or family members to bring them here, and we’re moving away from family reunification, which has been our cornerstone, and replacing it with a labor employment system to facilitate and strengthen corporate interests and allow for them —- for, you know, agribusiness and many of the other corporate powers -—

STAN MARK: That is true. And also part of that point system would favor people who speak English from countries, so countries that do not have English as part of their language or part of their education system, mainly countries of people from Africa, Southeast Asia, East Asia, Mexico and Central America, would not be favored under this system. And basically, by eliminating those family preferences that I mentioned earlier, it would prevent the people who are citizens and people who are green card holders in the future to prevent to bring in or petition for their family members in the future. So this is really a radical change.

AMY GOODMAN: Stan Mark, would it also be the case that the people who applied — who is the group that would have to leave for years, go back home, and then re-enter the country?

STAN MARK: Well, there’s a proposal for Z visas. They would have a period of eight years to actually return to their country and start the process of applying for lawful permanent residence. So if there is a group of people who are undocumented, the claim made by people who support the legislation is that all 12 million people, supposedly, would be eligible for this. My understanding is it’s really a probation or a temporary worker status, because you have that long period of time before you actually can be considered for lawful status, not that you would get it. So there’s that risk that you would fall off that long path to get lawful permanent residence, and you would be exposed to all these abuses, because part of it is, you would have to maintain a job. So that would limit your ability right away from, you know, dropping off from working. You would be more susceptible to control by the employers and basically unable, I guess, to kind of fall off that. If you deviate or fall off that path, you will be unable to achieve your lawful permanent residency. And the path is such a long, you know, period, it’s just open to people to abuse this.

JUAN GONZALEZ: So, in other words, the twelve million now who are in the country undocumented would be eligible for this Z visa, most of them, and in essence have a temporary worker status. It’s a probation period.

STAN MARK: It’s a probation period, and it’s a temporary status of some sort, as well. There is a separate temporary workers program that you mentioned earlier, about the 600,000 per year. But this is an attempt to give people the opportunity down the road, supposedly, to get lawful permanent residence, let alone citizenship, which would take, you know, an even longer period of time.

JUAN GONZALEZ: How long would it take for an average person who is now undocumented to eventually become a citizen, by your estimate?

STAN MARK: To become a citizen, I think at least 13 or more years, at least. At least.

AMY GOODMAN: The South Carolina Senator Lindsey Graham said this is the last best chance we’ll have as a Congress. If this somehow collapses, it will be years before you can recreate this. Do you think it should collapse?

STAN MARK: I reject it as a starting point for any type of negotiation, because it doesn’t have the kind of worker protections that we need. We have to look at repealing employer sanctions as one of the starting points to create more labor law enforcement, the conditions for better labor law enforcement so that we could actually allow for people to have — not just, you know, immigrant workers, but all working people — to have the benefits of the labor laws. And then, in addition to that, we would like to see an adjustment of status program. So this does not, you know, establish — this legislation or this proposal would not meet this criteria, and it does not, of course, utilize family reunification as the cornerstone of our policy.

AMY GOODMAN: Well, I want to thank you very much for being was. Stan Mark is the program director of the Asian American Legal Defense and Education Fund. Thank you for joining us. 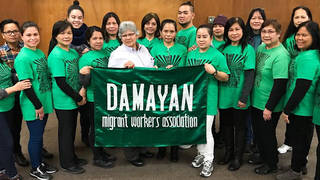