The Case of the Jena Six: Black High School Students Charged with Attempted Murder for Schoolyard Fight After Nooses Are Hung from Tree

Six black students at Jena High School in Central Louisiana were arrested last December after a school fight in which a white student was beaten and suffered a concussion and multiple bruises. The six black students were charged with attempted murder and conspiracy. They face up to 100 years in prison without parole. The fight took place amid mounting racial tension after a black student sat under a tree in the schoolyard where only white students sat. The next day three nooses were hanging from the tree. [includes rush transcript]

AMY GOODMAN: Jena is a small town nestled deep in the heart of Central Louisiana. Until recently, you may well never have heard of it. But this rural town of less than 4,000 has become a focal point in the debate around issues of race and justice in this country.

Last December, six black students at Jena High School were arrested after a school fight in which a white student was beaten and suffered a concussion and multiple bruises. The six black students were charged with attempted second-degree murder and conspiracy. They face up to 100 years in prison without parole.

The Jena Six, as they have come to be known, range in age from 15 to 17. Just over a week ago, an all-white jury took less than two days to convict 17-year-old Mychal Bell, the first of the Jena Six to go on trial. He was convicted of aggravated battery and conspiracy charges and now faces up to 22 years in prison. Black residents say race has always been an issue in Jena, which is 85 percent white and that the charges against the Jena Six are no exception.

The origins of the story can be traced back to early September, when a black high school student requested permission to sit under a tree in the schoolyard, where usually only white students sat. The next day, three nooses were found hanging from the tree.

Democracy Now! correspondent Jacquie Soohen has more on the story from Jena.

JESSE BEARD: Black girls over there, black boys right here. Some black people standing right — a couple. All the band geeks right there. White folks under the tree. And then you might — it’s like…

JACQUIE SOOHEN: Jesse Beard, a freshman in high school and one of Jena Six, took us to where the nooses were hung.

JESSE BEARD: One day, I just wanted to — maybe the first, second day, we started riding the bus, me and Robert. And we came through, and I seen something hanging there. I told Robert. He looked at it. He’s like, “Them nooses right there.” He was getting mad. Everybody was getting — I started getting mad. By the time everybody came, they was trying to cut them down.

JACQUIE SOOHEN: Robert Bailey, 17 years old and a safety receiver for the school football team, is another of the Jena Six facing life behind bars. He described his reaction to the nooses.

ROBERT BAILEY: It was in the early morning. I seen them hanging. I’m thinking the KKK, you know, were hanging nooses. They want to hang somebody. Real nooses, the ones you see on TV are the kind of nooses they were, the ones they play in the movies and they were hanging all the people, you know, and the thing dropped, those were the kind of nooses they were. I know it was somebody white that hung the nooses in the tree. You know, I don’t know another way to put it, but, you know, I was disappointed, because, you know, we do little pranks — you know, toilet paper, that’s a prank, you know what I’m saying? Paper all over the square, all the pranks they used to do, that’s pranks. Nooses hanging there — nooses ain’t no prank.

JACQUIE SOOHEN: The school’s superintendent dismissed the nooses as a prank, and after three days’ suspension, the three white students who hung the nooses were allowed back to school. Caseptla Bailey, Robert’s mother, said the school did not inform the parents of the incident.

CASEPTLA BAILEY: The school didn’t tell me. I didn’t know that it happened, so therefore I didn’t call to find out what happened on that particular day.

JACQUIE SOOHEN: To Caseptla Bailey, the meaning of the nooses was clear.

CASEPTLA BAILEY: It meant hatred, to the other race. It meant that “We’re going to kill you, you’re going to die.” You know, it sent a message: “This is not the place for you to sit. This is not your damn tree. Do not sit here. You know, you ought to remain in your place, know your place and stay in your place. You’re out of your boundaries.” And the first thing now that the sheriff department or that the chief of police want to say that — as well as the superintendent — one had nothing to do with the other. Now, come on now!

JACQUIE SOOHEN: Most people we spoke to in Jena’s white community, however, see no connection between the students’ charges and race. Barbara Murphy, the town librarian, claims there isn’t a race problem in Jena.

BARBARA MURPHY: We don’t have a race problem. It’s not black against white. It’s crime. The nooses? I don’t even know why they were there, what they were supposed to mean. There’s pranks all the time, of one type or another, going on. And it just didn’t seem to be racist to me.

JACQUIE SOOHEN: A few days after the nooses were hung, the entire black student body staged an impromptu demonstration, crowding underneath the tree during lunch hour. Justin Purvis, the student who first asked to sit underneath the tree, described how the protest came about.

JACQUIE SOOHEN: The school responded to the protest by calling police and the district attorney. At an assembly the same day, the district attorney, Reed Walters, accompanied by armed policeman, addressed the students. Substitute teacher Michelle Rogers, one of the few black teachers at the school, was there. She recalls the DA’s words to the assembled high schoolers.

JACQUIE SOOHEN: A series of incidents followed throughout the fall. In October, a black student was beaten for entering a private all-white party. Later that month, a white student pulled a gun on a group of black students at a gas station, claiming self-defense. The black students wrestled the gun away and reported the incident to police. They were charged with assault and robbery of the gun. No charges were ever filed against the white students in either incident. Then, in late November, someone tried to burn down the high school, creating even more tension.

Four days later, a white student was allegedly attacked in a school fight. The victim was taken to hospital and released shortly with a concussion. He attended a school function that evening. Six black students were charged with attempted second-degree murder and conspiracy to commit murder, on charges that leave them facing between 20 and 100 years in jail. The defendants, ranging in age from 15 to 17, had their bonds set at between $70,000 and $138,000. The attack was written up in the local paper as fact, and DA Reed Walters published a statement in which he said, “When you are convicted, I will seek the maximum penalty allowed by law.”

MINISTER: We have come today to stand against what we consider to be a great evil.

JACQUIE SOOHEN: Since their arrest, the defendants’ families have been speaking out and fighting for the release of their sons. Two of the six, including Mychal Bell, who was recently convicted, were unable to make bond and have spent close to seven months in jail to date.

JACQUIE SOOHEN: Caseptla Bailey began writing letters to state and national agencies, including the Department of Justice, immediately after the charges were filed.

You know, I’m just sending out these letters to anyone that would have a listening ear and to anyone that, you know, I thought that might help the situation. That’s how I fight back, you know, by putting the pen to the paper.

JACQUIE SOOHEN: At a friendly pickup game of football, Caseptla’s son Robert shows off the skills that made him a star player of the high school football team. Robert was in jail for over two months before his mother was able to raise the money for her son’s bond using three pieces of property from different family members. Seventeen-year-old Robert Bailey has no criminal record.

ROBERT BAILEY: I ain’t got no criminal record, nothing. I ain’t got no probation, community service or nothing, nothing like that. The DA, he ain’t after finding the truth. That’s what a DA’s for, to after find the truth, you know, of the case. He’s just, you know, trying to put me up in a jail cell, for life. Fifty years, 25 to a hundred years, you can just say “forever.” Twenty years is forever, to me.

JACQUIE SOOHEN: Robert wasn’t the only one with a promising future. All of the Jena Six were athletes, and five of the six were on the high school football team. Marcus Jones, the father of 17-year-old Mychal Bell, has a stack of scholarship offers for his son.

JACQUIE SOOHEN: Mychal is a star running back and a strong student who is being actively scouted by a number of colleges.

MARCUS JONES: We’re not blaming the victim for the charges or none of that. The DA is a racist DA. You know, I’m not calling him out for being a racist. I’m calling him out as being a racist due to his track record. The reason we is taking a stand for our kids for what he’s not doing is right, 'cause, you know, we're tired of it, you know, 'cause if we, you know, we sat down and lay back and let him railroad our kids, too, he's going to continue to do that to black people in this town. You know, so we have to take a stand now. Somebody has to take a stand now. If not, he’s going to continue to fill the prisons up with black people more and more.

JACQUIE SOOHEN: Mr. Bell believes that his son is learning a valuable lesson from this experience.

JACQUIE SOOHEN: For Democracy Now!, this is Jacquie Soohen, reporting from Jena, Louisiana.

AMY GOODMAN: That piece is from an upcoming feature documentary by Big Noise Films. Mychal Bell faces up to 22 years in prison when he’s sentenced July 31st. The five other students await trial on charges of attempted second-degree murder and conspiracy. They face up to 100 years in jail. When we come back from break, we’ll be joined by parents of three of the Jena Six, as well as the journalist who broke the story nationally.

“A Modern-Day Lynching”–Parents of Jena Six Speak of Injustice, Racism in Sons’ Prosecution 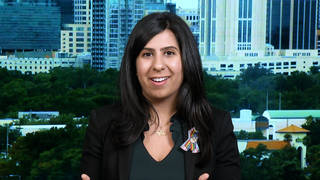