A Louisiana judge has refused to overturn the conviction of Mychal Bell. He and five other African-American teens were arrested and charged with attempted murder after a schoolyard fight in which a white student was beaten and suffered a concussion. An all-white jury found Bell guilty of second-degree battery and conspiracy in June. On Tuesday, a judge dismissed Bell’s conspiracy charge, and prosecutors announced they’ve reduced the attempted murder charges against two others among the Jena Six. [includes rush transcript]

AMY GOODMAN: A Louisiana judge has refused to overturn the conviction of Mychal Bell. Bell and five other African-American teens were arrested after a schoolyard fight in which a white student was beaten and suffered a concussion. The fight followed months of escalating tension in the town of Jena, Louisiana. Nooses had been hung from a schoolyard tree where the black students had sat.

The Jena Six, as they’ve come to be known, were initially charged with attempted murder. Mychal Bell is the only student tried so far. An all-white jury found him guilty of second-degree battery and conspiracy in June. On Tuesday, Judge J.P. Mauffray let the conviction stand, despite ruling Mychal Bell was improperly tried in adult court instead of as a juvenile. Bell’s conspiracy charge was dismissed, but he still faces up to 15 years in prison.

Thousands of supporters from across the country are expected to gather for a rally in Jena when Mychal Bell is sentenced on September 20.

Well, Democracy Now! traveled to Jena over the weekend to cover this story, and I spoke to Theo Shaw and Robert Bailey at their home in Jena. They were ironing their clothes, preparing to go out for the evening. Robert and Theo were held for about eight months in prison until their families raised the money to bail them out. Theo was just released over a month ago on more than $100,000 bail. I began by asking Theo to describe his time in jail.

THEO SHAW: They maced one time. It was on March the 14th. I had asthma. I told them. They already knew this. I had asthma, take me originally to the emergency room.

AMY GOODMAN: And what did the asthma come from?

THEO SHAW: Where did it come from? My asthma?

AMY GOODMAN: Yeah, what triggered it that night?

AMY GOODMAN: What triggered it? What made it happen that night?

AMY GOODMAN: So the police — the jail, the guards would mace you in the prison cell?

THEO SHAW: Sometimes when they make a lot of noise, they’ll mace. And sometimes they just mace for no reason.

AMY GOODMAN: How many of you were in a cell?

AMY GOODMAN: Did they mace you a lot?

AMY GOODMAN: You told them you had asthma?

THEO SHAW: They already knew. It happened more than one time.

AMY GOODMAN: When they had to bring you to the hospital?

DAVID GOODMAN: What happens when you get maced? What does it feel like?

THEO SHAW: I got asthma. I couldn’t breathe.

ROBERT BAILEY: It took them forever to come back there. I had to holler like 30 times. You know, you bang on the wall if they’re spraying, so I’m banging on walls. “He can’t breathe! He can’t breathe!” So I’m like kicking 'em, kicking ’em. I'm kicking the wall and jumping in front of the camera. “Hey, what you want?” They gonna spray me, so I’m running like, you know, “He’s got asthma.” [inaudible] They weren’t going to believe us at first. I don’t know. [inaudible]

AMY GOODMAN: So you guys were kept in the same cell?

ROBERT BAILEY: At first. Then they —

THEO SHAW: They tried to separate us. They didn’t want us to be together.

THEO SHAW: Then we ended up getting together when everybody started getting out.

AMY GOODMAN: How hard has all this been on you?

AMY GOODMAN: Do you think you’ll be able to finish high school?

AMY GOODMAN: How will you do it?

THEO SHAW: By taking home school or something. I’ve got to finish, because I want to go to Grambling.

AMY GOODMAN: Where do you want to go?

AMY GOODMAN: I asked Theo to think back to September 2006, when the nooses were hung in the schoolyard tree. I asked him what the nooses meant to him and how they made him feel?

THEO SHAW: A threat: “We gonna kill you. We don’t want you around here.” That’s how I looked at it.

AMY GOODMAN: The nooses came after someone, a black student, asked the principal if black students could sit under the tree?

THEO SHAW: Yeah, the next day.

AMY GOODMAN: So what did you all do in reaction to that, when you saw the nooses?

THEO SHAW: Stopped under the tree and questioned a lot of white students.

AMY GOODMAN: Someone told us that the black students thought it was funny. Did you think it was funny?

AMY GOODMAN: I asked Theo and Robert if they were surprised to find the nooses on the tree the day after the black students dared to sit in its shade.

AMY GOODMAN: Why did it surprise you?

THEO SHAW: 'Cuz I didn't think anybody had the guts to do that, not in school hours.

AMY GOODMAN: The students weren’t expelled. They were suspended. Do you know the students? Three students?

THEO SHAW: I know them.

AMY GOODMAN: What did you think should have happened to them?

THEO SHAW: They should have got expelled.

THEO SHAW: 'Cuz it wasn't no prank. It was a threat.

AMY GOODMAN: Robert, what did you think about the nooses?

ROBERT BAILEY: I don’t know. I was mad. Everybody was mad about the nooses.

AMY GOODMAN: What did they mean to you?

AMY GOODMAN: And what did you think about the students being suspended?

AMY GOODMAN: White boys, you said, wanted to fight them, as well as black students?

AMY GOODMAN: And what did you think should have happened to the students?

AMY GOODMAN: Are you going to try to finish high school?

ROBERT BAILEY: I hope I do.

AMY GOODMAN: Why is that important to you?

AMY GOODMAN: Do you want to stay in Jena?

AMY GOODMAN: Did what happened in September with the nooses hung there, did that change your view of Jena?

THEO SHAW: No, that didn’t change my view.

AMY GOODMAN: What does it feel like to be called one of the Jena Six?

THEO SHAW: It makes some of us feel like we’re famous, but it don’t give me no feeling to be called “Jena Six.”

AMY GOODMAN: How does it feel to come out of jail?

THEO SHAW: Great. Just to walk free and eat what you want.

RICK ROWLEY: What’s the first thing you did when you got out?

DAVID GOODMAN: What have you heard about — what’s it meant to you that other people have been organizing to help support you?

THEO SHAW: I just thank them for the — appreciate it, all the help that we get.

DAVID GOODMAN: Were you surprised when you heard about the defense committee and the protest march? Does that surprise you?

DAVID GOODMAN: What’s surprising about it?

THEO SHAW: That we’ve got people that are not scared to stand up for what’s right.

AMY GOODMAN: Theo Shaw and Robert Bailey, two of the Jena Six. The first will be sentenced on September 20, Mychal Bell. He faces more than 15 years in prison. We went to Democracy Now! with producer Anjali Kamat, journalist David Goodman and filmmakers Jacquie Soohen and Rick Rowley. We went together to Jena, Louisiana, this weekend.

We’re joined by American Civil Liberties Union Executive Director Anthony Romero to talk about a number of issues. But for just a minute — it’s great to have you with us — what about the Jena Six? The ACLU is involved.

ANTHONY ROMERO: Well, it clearly points to the continued discrimination and the whole climate of racism in post-Katrina, as we celebrate the anniversary of the Katrina events. And you see now also the difficulty of the persistence of race, especially in local communities. The idea that these young men, these boys in high school, are being treated also as adults, where they’re being sentenced for potential sentences in prisons, that goes so much further than anyone had ever contemplated. It also raises questions around crime and punishment, especially when you’re a poor minority. And so, those are still the most vexing questions that we contend with as a society.

AMY GOODMAN: We’re going to break, and then we’ll come back and talk about these questions here in this country and around the world, America’s effect on the world. Anthony Romero, our guest for the hour, executive director of the American Civil Liberties Union. We’ll be back in a minute. 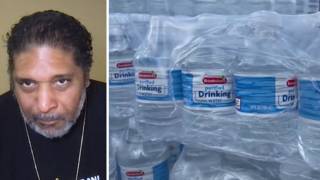