How Does the Media Cover Global Warming?

The Society of Environmental Journalists is holding its 17th annual conference at Stanford University this week. We take a look at how the issue of global warming is being covered in the media with two leading environmental journalists, Tim Wheeler of The Baltimore Sun and Jim Motavalli of E/The Environmental Magazine. [includes rush transcript]

StorySep 09, 2019Hurricane Dorian Was Fueled by Climate Change. Why Isn’t the Mainstream Media Making the Connection?

AMY GOODMAN: We’re broadcasting from Stanford University in Palo Alto, California, where the annual meeting of the Society of Environmental Journalists is just kicking off. We’re joined by two leading environmental journalists: Tim Wheeler, a veteran reporter on growth and development and environmental issues for The Baltimore Sun; also Jim Motavalli, editor of E/The Environmental Magazine, the only independent national environmental bimonthly, author of two books, Breaking Gridlock: Moving Toward Transportation That Works and Forward Drive: The Race to Build “Clean” Cars for the Future. We welcome you both to Democracy Now!

Tim Wheeler, the last environmental piece that you wrote, what are you dealing with in Maryland?

TIM WHEELER: Well, we’re dealing with development issues that involve resources, and water, in particular. For a state that gets a lot of rainfall, we actually have communities that are undergoing water shortages, simply because they’re glowing faster than they can supply their citizens with water. It’s a planning issue, but it’s also one where one has to decide where growth is appropriate. And the communities are having to come to grips with that now.

AMY GOODMAN: How polluted is the water, is the Chesapeake Bay, and how concerned are people?

TIM WHEELER: It’s not healthy. Despite more than 20 years of efforts to clean it up, it’s still in a distressed condition. The fisheries are fractions of what they used to be in most cases. Striped bass are probably the one exception to that. Oysters, clams, crabs in decline.

The public is concerned. But one of the concerns that policymakers have is whether there is a fatigue among the public about what to do about it. And one of the issues that really nobody has come to grips with is, despite the improvements in pollution control, the individual impact is reduced, the number of individuals is growing. And that goes back to the growth issue. How do you deal with that?

TIM WHEELER: Well, I like to say this is, to borrow the Dickens phrase, these are the best of times and the worst of times. The best of times in the sense that for the first time in a while the environmental story is big news. Climate change is big news, and that’s an overarching storyline for a lot of environmental issues. The public is aware and is concerned in ways that the media are starting to respond to that. Magazines that you wouldn’t imagine would cover climate have done cover stories — Sports Illustrated, for instance.

And yet, in the mainstream media, at least, because of the economic problems, the financial problems they’re having, they’re reducing staff. And that means there are fewer reporters on newspapers and in television and radio to cover the issues. So the challenge is how to get the story out and still have a job.

AMY GOODMAN: So do you see media consolidation as an environmental issue?

TIM WHEELER: You could put it that way, yes. It certainly has an impact on the amount of information that the public can get about environment.

AMY GOODMAN: Jim Motavalli, E magazine, what is it, and what’s the issue that you’ve taken on most recently?

JIM MOTAVALLI: Well, I think we do quite a lot on global warming now. It’s one of our prime subjects. I think everything is related to it. I think all environmental issues end up having a climate connection, if you look at it that way, because they’re all being affected by it.

I certainly agree with Paul Ehrlich that population is sort of a undiscussed part of global warming, that human beings consume a lot of energy, and if you add two-and-a-half billion people to the planet, which is what we’re likely to do — people have focused on the so-called birth dearth effect, that the major developed countries are actually experiencing population shrinkage, but for the most part the world is still likely to grow quite a bit in terms of the overall human population, and that’s going to have a big climate burden. Whatever we come up with, whether it’s a, you know, solution for global warming, if we come up with fuel cells or solar or wind, all of that is harder to deal with when we’re talking about a population of as much as 10 billion, which is what we’re looking at before population peaks. So I think that’s a very important point to make. It doesn’t get made very much in the environmental debate.

AMY GOODMAN: Talk about transportation, what you wrote one of your books on.

JIM MOTAVALLI: I think we’re in a very bad state with transportation. We’re very dependent on foreign oil in the United States. The whole world is running on oil. And we’re reaching peak oil conditions that may have already happened. It may happen in 10 years. And what that means is oil is likely to get very expensive. It doesn’t mean we’re running out of oil. That’s too simplistic. What it means is we’re reaching the point where there will be more demand for oil than there is supply. And at that point oil starts to get really expensive. If people think $3 a gallon is expensive, talk about $5 a gallon or $6 a gallon. And then we’re going to be in real competition for oil. And that’s how you can say Iraq is about oil, or, you know, the resource wars are really going to characterize the 21st century. We’re not only going to be fighting over oil, we’re going to be fighting over water, as well. I think that’s going to be — those are the two big issues, oil and water, which do not mix, as we all know.

AMY GOODMAN: Tim Wheeler, why a Society of Environmental Journalists, and what are you going to try to be doing over these next few days with hundreds of environmental journalists from around the country?

TIM WHEELER: Well, the Society exists to promote better environmental journalism, essentially, to improve the quality, the accuracy and the visibility of it. Our conferences draw 700, 800 people every year, about half of them working journalists. The other half are people that we’ve invited to speak to us or invited to be there. We have an open discussion about environmental issues, and we also talk about how to tell the story better. So it’s a mixture of policy and of craft.

AMY GOODMAN: How do you tell the story, when you have over the last years this whole issue of just the words “global warming” vacuumed off of government websites, the pressure on government scientists not to put those two words together? Weather people, we see more and more weather people and weather reports on television, but how rarely we see those two words “global warming” uttered in the same breath.

TIM WHEELER: Well, one of the stories that we write about, of course, is the pressure on scientists. And whenever a scientist tells us about being pressured not to talk about global warming, that’s a story that’s to get out there. One of the issues that we care about and that we are passionate advocates for is freedom of information and to let the public know what’s being discussed by their policymakers.

AMY GOODMAN: It is harder to get information now?

TIM WHEELER: It is, in some ways, yes.

JIM MOTAVALLI: You know, the polls show that people are very uninformed about global warming. They largely think it will not affect them in their lifetimes, when all the evidence we have shows that it’s already affecting people’s lifestyles and what happens today. You know, we’re already seeing species migrating and a sea-level rising and record heat waves all over the world. These things are already started. And yet, people are convinced that it’s going to be something that their grandchildren are going to be dealing with. In reality, global warming started. It’s affecting people’s lives right now.

JIM MOTAVALLI: In every possible way. I mean, when we have a heat wave, you can’t directly say that that’s connected to global warming. Science doesn’t work that way. You can say, this is what we would expect to see if climate change was real. I mean, that’s the way scientists work. But when we see such an overwhelming pattern of these things and we see storm intensity, you can say that global warming causes warmer water, warmer water leads to higher storm intensity, and therefore this storm is worse than it might have been. Scientists argue about this. You can’t say these things are definite cause and effect, but there’s a relationship that’s hotly debated.

JIM MOTAVALLI: Right. That kind of thing is indicative of what you might expect to see if global warming was real, right? I mean, that’s the way we talk about it in science.

AMY GOODMAN: Well, I want to thank you both for being with us. If people want to see the Society of Environmental Journalists website, where can they go?

AMY GOODMAN: I want to thank you. And E magazine?

JIM MOTAVALLI: That’s at emagazine.com. People can read our cover stories, get a free issue, if they go there.

AMY GOODMAN: I want to thank you both, Jim Motavalli of E magazine and Tim Wheeler of the Baltimore Sun, for being with us.

As Pentagon Prepares to Shut Down TALON Spying Database, Antiwar Students Group Talks About Being Listed as “Credible Threat” 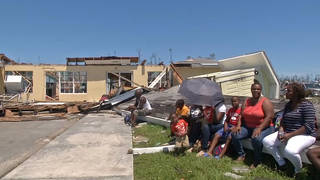