Today, a Democracy Now! special: an in-depth look at Suharto’s brutal thirty-year reign and the role of the United States in shoring him up. Suharto rose to power in 1965, killing up to a million Indonesians. Hundreds of thousands of more people died during the US-supported Indonesian invasion and occupation of East Timor. Tens of thousands also died in West Papua and Aceh. On Sunday, Cameron Hume, US ambassador to Indonesia, said, “Though there may be some controversy over his legacy, President Suharto was a historic figure who left a lasting imprint on Indonesia and the region of Southeast Asia.” [includes rush transcript]

AMY GOODMAN: Suharto is dead. Indonesia’s brutal dictator rose to power in 1965, killing up to a million Indonesians. But despite presiding over some of the region’s worst human rights abuses, Suharto was never brought to justice and was able to live in peaceful retirement. He died in a hospital on Sunday after suffering multiple organ failure. He was eighty-six years old. On Monday, he was buried in the city of Solo in central Java in a state funeral with full military honors.

Human Rights Watch said Suharto had “gotten away with murder — another dictator who’s lived out his life in luxury and escaped justice.”

In addition to the million Indonesians killed during Suharto’s rise to power, hundreds of thousands of more people died during Indonesia’s 1975 invasion and quarter-of-a-century occupation of East Timor. Tens of thousands also died in the separatist regions of West Papua and Aceh.

Suharto was finally swept from power in a 1998 pro-democracy uprising. In addition to rampant human rights abuses, Suharto’s regime was also characterized by rampant corruption and nepotism. Indonesia was regularly ranked as one of the world’s most corrupt countries, as Suharto’s family and inner circle amassed enormous wealth. Transparency International, the anti-corruption group, has estimated Suharto amassed a personal fortune of between $15 billion and $35 billion.

Following his death on Sunday, the US ambassador to Indonesia, Cameron Hume, hailed Suharto in a statement. He said, “President Suharto led Indonesia for over thirty years, a period during which Indonesia achieved remarkable economic and social development… Though there may be some controversy over his legacy, President Suharto was a historic figure who left a lasting imprint on Indonesia and the region of Southeast Asia” — again, the words of the US ambassador to Indonesia.


Today, we look at Suharto’s brutal thirty-year reign and the role of the United States in shoring him up. We’re joined by three people.


Brad Simpson is the director of the Indonesia and East Timor Documentation Project at the National Security Archive at George Washington University. He’s assistant professor of US history and foreign relations at the University of Maryland in Baltimore County. His forthcoming book is called Economists with Guns: Authoritarian Development and U.S.-Indonesian Relations, 1960-1968

. Brad joins us from Baltimore, Maryland.


On the telephone from Indonesia, we’re joined by Allan Nairn, an award-winning investigative journalist who’s reported from Indonesia for years. He runs the web blog News and Comment.


And we’re also joined on the telephone from Jakarta by Galuh Wandita, longtime human rights activist in Indonesia. She is the Jakarta director of International Center for Transitional Justice and was the deputy director of East Timor Truth and Reconciliation Commission.


We welcome you all to Democracy Now!, and we’re going to go first to Galuh Wandita in Jakarta. Your reaction and the reaction on the ground of the death of Suharto?


GALUH WANDITA: Well, Amy, there is an outpouring of grief that you can see on the film footage on the TV of people sort of feeling sad and coming out. But a lot of this is also orchestrated by those who have the most to gain from sort of this continuing impunity for Suharto. So it is very strange, actually, to watch the news now and sitting here in Jakarta.


AMY GOODMAN: Allan Nairn, you were in Indonesia when the announcement came of Suharto’s death. What were you hearing? What were people saying where you were?


ALLAN NAIRN: Well, among the people in the poor compounds where I was, I guess the reaction was summed up by one woman who works in the market. She sells vegetables and cakes in one of the traditional markets. And she said, “Oh, Suharto, he died of overeating. He ate too much money. He ate so much that there wasn’t enough left for anybody else to eat.” People didn’t care, or they said good riddance. That seems to be the reaction among the poor.


But among those who made money off of Suharto, there seems to be some sadness. There also seems to be some sadness for the US ambassador. That quote you read defending Suharto, that’s the same argument that was used to defend Stalin. They said, oh, he killed a lot of people, but he developed the country economically. So if you buy that logic, the US should have been defending Stalin, as well.


In fact, if you compare Indonesia this day to Malaysia, a neighboring country which started out at the same economic level, after Suharto and the army got done with Indonesia, wages in Indonesia are about a sixth of what they are in Malaysia. There was growth in the sense — in Indonesia, in the sense of multinationals like Exxon coming in and taking the gas. People were coming in and taking the gold, new mines coming in and taking out their minerals, creating an export platform for Nike, etc. But in terms of lives of the poor — hunger, life expectancy, health, nutrition — people in Malaysia ended up doing much better, because there they took away power from the army, they put restrictions on the multinationals, and they had a different form of development. So the idea that Suharto’s mass murders were somehow balanced by economic progress he gave to the people is just factually incorrect, and it’s not surprising that poor people don’t seem bothered by his passing.


AMY GOODMAN: Professor Brad Simpson in Baltimore, you’ve been accumulating numerous documents about the relationship between successive US administrations and the thirty-year reign of Suharto. As Suharto is buried with full military honors today, yesterday the lower third, the title on the CNN story about Suharto, said, “Smiling general dies.” Your reaction?


BRAD SIMPSON: Well, I think the reaction can be summed up by the editorial that was in the Wall Street Journal today and the statements of Prime Minister Kevin Rudd of Australia, former ambassador Richard Woolcott and numerous other apologists for Suharto’s crimes. And I think that the headline might be “Let the apologetics begin.” And already Suharto’s defenders are claiming that the rivers of blood, the mountains of corpses that he left behind in East Timor, in Aceh, in West Papua, all across Indonesia, have to be balanced against the fiction of Indonesia’s growth and development during his thirty-two years in power.


But the apologetics began immediately upon Suharto’s ascendance to power in 1966. And the succession of US administrations, both Democratic and Republican, continued with those apologetics, even as they became aware, as they were from the very first moments, of Suharto’s murderous reign, his rampant corruption, his brutal crushing of dissent. And from the Lyndon Johnson administration in 1966 straight on through the Nixon, the Ford, the Carter, the Reagan, the Bush and the Clinton administration, the apologetics never stopped.


And over the course of thirty-two years, in surveying tens of thousands of documents that we have declassified concerning US relations with Suharto, I’ve yet to come across a single moment in this three-decades-long relationship when any high-ranking US official ever prioritized democracy or human rights over political stability, the rights of multinational corporations and the friendly relations that the United States had with Suharto as somehow counterbalancing his atrocious criminal and brutal legacy.


AMY GOODMAN: Galuh Wandita in Indonesia, in Jakarta, what do you think is most important for Americans to understand about Suharto?


GALUH WANDITA: I think — I mean, I think at this moment, because of the — this [inaudible] to now, I think the reformation agenda has gone backwards, and a lot of the information about the truth, what happened during his regime, is actually to become known or to be acknowledged by the public in Indonesia, the general public in Indonesia, and also by the Indonesian government, obviously. So I think that what I would like to say to the American public is that, you know, it might be very baffling to see what’s happening now with this — all this sort of apologizing and adoration for Suharto, but really the jury is still not out. The truth hasn’t come out yet, and we mustn’t forget the cost, I think, that both Allan and Brad have spoken about, the cost of the thirty years of corruption and crimes, really. We’re still living in the consequences of what happened during Suharto regime. But in Indonesia, that connection is still not made yet, and that is part of our struggle now, to look at the crimes of the past and actually to find — to speak to the public about how his actions actually led to all these crimes.


AMY GOODMAN: We’re speaking to Galuh Wandita, the Jakarta director of the International Center for Transitional Justice; Brad Simpson, with us from Baltimore, a professor at University of Maryland; and we’re joined by Allan Nairn, just out of Jakarta, still in the region, investigative journalist. When we come back, we’re going to play an excerpt of the documentary Massacre: The Story of East Timor, goes back through the relationship of the United States with Suharto through East Timor, and we’ll come back to our guests. Stay with us.

Massacre: The Story of East Timor

NEXTMassacre: The Story of East Timor 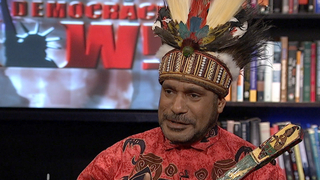