The International Longshore and Warehouse Union has been organizing to shut down ports on the West Coast today, May Day, to protest the wars in Iraq and Afghanistan. But yesterday an arbitrator ordered the union to tell its members that they must report to work today. We speak to Clarence Thomas, an executive board member of the International Longshore and Warehouse Union (ILWU) Local 10 and a member of US Labor Against the War. [includes rush transcript]

Web ExclusiveMar 18, 2011Ralph Nader and Daniel Ellsberg: We Need to See Courage and Mobilization Here as Well as the Middle East

AMY GOODMAN: We move on now to another protest, as tensions rise here on the West Coast between dockworkers and their employers’ group, the Pacific Maritime Association. The International Longshore and Warehouse Union has been organizing to shut down ports on the West Coast today, May Day, to protest the wars in Iraq and Afghanistan. But yesterday an arbitrator ordered the union to tell its members they must report to work today.

Meanwhile, dockworkers in Iraq have announced plans to shut down the ports of Umm Qasr and Khor Al-Zubair for one hour today to show solidarity with US workers.

We’re joined on the phone right now by Clarence Thomas, executive board member of the International Longshore and Warehouse Union (ILWU) Local 10 and a member of US Labor Against the War.


So what are your plans today after this arbitrator made the announcement yesterday?


CLARENCE THOMAS: Well, good morning, Amy, and thanks for having me on the show. I just want to say that longshoremen are not slaves. We can take a day off. And this action that we are taking has emanated from a decision made by our rank and file at our Longshore Caucus. Our Longshore Caucus is the highest ruling body of the Longshore Division. And we are calling for a call to conscience so that our workers can take a position against the war in Iraq and Afghanistan.


These are our children, Amy, that are being killed. And if we are silent, then we are complicit with the George Bush administration in the killing of our children. We believe that this action is important, because we are taking this action in the name of millions of workers in this country who would love to do what we’re doing but because of their circumstances cannot.


We also want to let you know that the truckers, the independent truckers, many of whom are immigrant workers, will also be acting in solidarity. In New Jersey, port truckers will not be working in the ports of Newark and Elizabeth, as well as the ports of Houston in the Gulf. So this movement is growing, and this is not just an action taken by the ILWU. We have a Port Workers May Day Organizing Committee, which is made up of various trade unionists here in the Bay Area, as well as antiwar activists and social justice activists.


AMY GOODMAN: So, you will defy the arbitrator and his order to the union, saying that the union should tell the workers to go to work today.


CLARENCE THOMAS: Well, Amy, you know, the great Harry Bridges, who was one of the founding members of our organization, once said that the rank and file does what it has to, and it’s up to the lawyers on how to get us out of it. That’s what we pay them for. What that translates into is this: the ILWU was born in struggle, and the threat of lawsuits and other kinds of actions by the arbitrator, even though they are in effect, workers have a right to take off. So we’re not bound to go to work simply because of the fact that the arbitrator says so. [crosstalk] We also believe that this action today —-


AMY GOODMAN: Well, I want to thank you, Clarence Thomas, for joining us, executive board member of the International Longshore and Warehouse Union (ILWU) Local 10, a member of US Labor Against the War. And as we go into this break and then come back and speak to the Reverend Jesse Jackson, riot police in Turkey have clashed with labor activists trying to gather in Istanbul’s Taksim Square to celebrate May Day. Our video -— our TV viewers are seeing the footage, and for our radio listeners, you can look at it at democracynow.org. 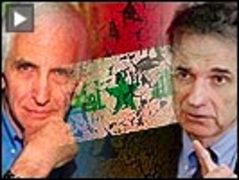 Ralph Nader and Daniel Ellsberg: We Need to See Courage and Mobilization Here as Well as the Middle East