“This is very much similar to what is happening in Sudan, in Palestine, in Iraq, in Afghanistan and Somalia, [where] the United States is basically instigating and funding civil wars,” says professor As’ad AbuKhalil. [includes rush transcript]

The fighting shifted to the north and east of the country over the weekend, and fresh clashes were reported in Beirut this morning. Meanwhile, the Arab League has agreed to send a high-level political delegation to Lebanon to dialogue with leaders from all sides.

The violence, which has been described as the worst since the civil war, erupted last week during a general strike called by the General Federation of Labor Unions to protest the high cost of living.

On Thursday, Hezbollah leader Hassan Nasrallah held a news conference in Beirut to mark what he called the beginning of a “new era” in Lebanese politics. He condemned a decision by the Lebanese cabinet to outlaw Hezbollah’s telecommunications network and dismiss the head of airport security for his alleged ties to the party. Nasrallah said their private communication network was a vital tool in combat and critical to their success during the July 2006 war with Israel. He described the government crackdown as “tantamount to a declaration of war.”


HASSAN NASRALLAH: [translated] If we want to get off of this crisis, to get out of this standoff, of this confrontation, they need to revoke the decisions of the illegitimate government, and they need to go to the dialogue. That’s all. If they want to be stubborn, they will go elsewhere. The game is very dangerous. If they are truly keen about preserving the country, they have only these two solutions.

AMY GOODMAN: Secretary of State Condoleezza Rice criticized Hezbollah and declared US support for the Lebanese government led by Prime Minister Fouad Siniora. But after four days of fighting, Siniora capitulated and announced Saturday the decision regarding Hezbollah’s demands now lay in the hands of the Lebanese army. The army commander, General Michel Suleiman, is slated to be the new president of the country.


For analysis of the situation in Lebanon, I’m now joined on the phone from California by As’ad AbuKhalil, professor of political science at California State University, Stanislaus, and the creator of the Angry Arab News Service blog at angryarab.blogspot.com. We welcome you to Democracy Now!


AS’AD ABUKHALIL: Well, yes. I think that people may remember, back in the 1980s, the United States government, for two years in the administration of Ronald Reagan, deployed troops from ’82 to ’84. And there was a civil war, and the United States was supporting the rightwing militias of Israel in Lebanon, and they used the discourse of supporting the central government of Lebanon.


Something similar is taking place right now in Lebanon, and this is very much similar to what’s happening in Sudan, in Palestine, in Iraq, in Afghanistan and Somalia. The United States is basically instigating, funding and arming civil wars in all those places. We hear a lot about this inability of the international community to tolerate armed militias. Of course, Hezbollah is an armed militia, but so are the pro-militias of the government. There’s a Los Angeles Times article today detailing the efforts by the United States and allies to create militias throughout the country. And the Washington Post indicated that this government of the United States spent $1.4 billion to prop up the administration of Siniora in Lebanon.


And things have gotten to this point because America basically is responsible, more than their clients in Lebanon. I mean, there were ideas of dialogue in Lebanon, and things were moving in that direction, and then, suddenly, lo and behold, the Assistant Secretary of State of the United States for the Near East, David Welch, shows up in Lebanon, and he basically wanted to stiffen the resolve of the clients and to basically prevent the possibility of dialogue. And then, Walid Jumblatt, one of the clients of the United States and Saudi Arabia and Lebanon today, escalated by deciding on taking the issue of disarming Hezbollah, which is supported at least by half of the Lebanese, and Lebanese parties, including clients of the United States, agreed that the issues of disarming Hezbollah should be left for internal dialogue of the Lebanese themselves.


But it seems the Bush administration, while it’s sailing into the sunset, wanted to achieve a victory that has long eluded it in Iraq and elsewhere. They were getting too excited about Lebanese affairs in the Washington Post, who were celebrating the so-called Cedar Revolution. Well, they tried to push them further, and look what happened. This is something that experts have warned the United Nations about. If you push things to that point, the other side is going to lash out, and they did lash out, even if one, like me, does not like the scenes of these militias and armed thugs running into the streets of Beirut and so on. But basically, we have to say that this is the doing of US foreign policy, and this is the true face of the Bush Doctrine in the Middle East.


AMY GOODMAN: Can you talk overall about the United States — what you feel the US role should be right now?


AS’AD ABUKHALIL: Well, I mean, just to get out, just to not be as heavily involved. We have to see that US policy is not only in funding and arming the militias in the Anbar province in Iraq or places in Iraq — I mean, Afghanistan, the warlords, or in Lebanon, the various militias. But we have to say that this level of intense tensions and conflict and animosity is the product of a deliberate American-Saudi policy of instigating a Sunni-Shiite conflict, the likes of which Lebanon has never seen. I mean, even somebody like myself who come from a split background — my mother is Sunni, and my father is Shiite — I mean, we’ve never seen anything like this. Saudi media, with the full cooperation of the United States, have been for three years mobilizing the Lebanese opposition, because that’s the only thing they have. I mean, if patriotism is the last refuge of a scoundrel, sectarianism in Lebanon is the last refuge of scoundrels of the United States and Israel. They have been for serious propagandizing to splitting Sunnis from Shiites in order that they create a militia that can stand up to Hezbollah.


Well, this militia of Hariri’s, as supported by the United States, trained in Jordan, funded by Saudi Arabia, basically didn’t last. It’s very much like the Dahlan gangs in Palestine in Gaza. They do not have a cause. The United States can provide them with weapons and with money; it cannot provide them with a doctrine or an ideology. And that’s why, when push comes to shove, they flee. They flee for their life, just as militias of Israel fled across the border when Israel attacked and left, humiliatingly, South Lebanon in 2000.


AMY GOODMAN: Professor AbuKhalil, we have thirty seconds. What’s next? What do you make of Hassan Nasrallah’s comment that this is a new era in Lebanese politics?


AS’AD ABUKHALIL: Basically, he is saying that they will no more allow this heavy-handed role by the Saudis in Lebanon, and they want to change the balance of forces on the ground. Now, that in itself does not bode well for the future in Lebanon. I fear that Hezbollah may get too intoxicated with their so-called victories on the streets of Lebanon, and they may assert a sectarian agenda that is going to provoke the other side. I worry about a [inaudible] syndrome among the Sunnis of Lebanon.


AMY GOODMAN: I want to thank you very much for being with us. Professor As’ad AbuKhalil teaches political science at California State University at Stanislaus, visiting professor at UC Berkeley. 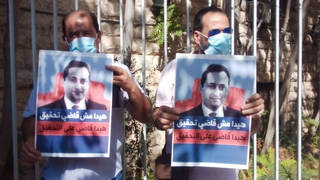