The secretary of the Army has ordered an internal review to examine the Army’s firing last month of the former public affairs director of Arlington National Cemetery. Gina Gray assumed the role of public affairs director of Arlington in April. She quickly discovered that cemetery officials were attempting to impose new limits on media coverage of funerals of the US soldiers killed in Iraq — even after the families of the dead soldiers had agreed to let the press attend. After she pushed for greater media access, she says she was fired in a retaliatory move. [includes rush transcript]

AMY GOODMAN: The secretary of the Army has ordered an internal review to examine the Army’s firing last month of the former public affairs director of Arlington National Cemetery.

Gina Gray assumed the role of public affairs director of Arlington in April. She quickly discovered cemetery officials were attempting to impose new limits on media coverage of funerals of the US soldiers killed in Iraq — even after the families of the dead soldiers had agreed to let the press attend. After she pushed for greater media access, she says she was fired in a retaliatory move.

Army spokesperson Paul Boyce told the Washington Post, “The goal is to strike the right balance between the family’s needs and wishes, which always are our top priority, and the interest of the press.”

Gina Gray joins us on the phone right now from Washington, D.C. Welcome to Democracy Now!


AMY GOODMAN: Tell us what happened to you, Gina Gray. Why are you no longer the public affairs director at Arlington National Cemetery?


GINA GRAY: Well, I think, as you talked about, I had found some — really some discrepancies with what I was being told and what Army regulations were, and Cemetery officials were not following established Army protocol when it came to media access and public affairs. And when I raised the issue and raised my concerns, as a result, I think kind of — as time went on, things got a little bit worse, and they finally fired me.


AMY GOODMAN: Talk about your background. Where else had you worked before going to Arlington?


GINA GRAY: Well, I have spent my entire adult life either in the Army or supporting the Army, doing public affairs. I’ve done this for almost thirteen years now. So this was not something that was new to me.


AMY GOODMAN: What exactly are the regulations?


GINA GRAY: Well, right now, there aren’t any, and that was the issue. There are no regulations. There is nothing in writing that governs media coverage at Arlington Cemetery. And when I went in there and I was told, “It’s the law, it’s regulation,” and I said, “OK, well, where is it?” nothing was produced. Nobody could show me where it said exactly that the media had to stand so far back. And the Army has established policies already in place, and the fact that Arlington officials were not following that, that really irritated me.


AMY GOODMAN: How many funerals are there at Arlington every day, every week?


AMY GOODMAN: Can you talk about your experience, just, what, more than a week into your time as the public affairs director at Arlington National Cemetery, at the funeral where you saw the cemetery’s deputy superintendent — his name, I believe, was Thurman Higginbotham — moving the press away, like fifty yards away?


GINA GRAY: Well, that was — yeah, that was about, I think, day seven on the job there at Arlington, and I had, you know, already questioned a little bit as far as where the regulations were and where they were getting their information from, as to how they placed the press. When I went out to pick the press up at the main gates of Arlington Cemetery to bring them back to the burial site, that’s when I got out there and found out that the deputy director had moved the press pit. You know, they corral off the press there, and he had moved the press pit, and seemingly, I think, just because he could. There was really no reason why he moved that.


And that’s where it became really contentious between him and the reporters. And they argued back-and-forth as the family was arriving at the burial site, in which a person — you know, everything has to stop and you can’t continue to argue. But it was from that point on, is where the problems occurred. And I was really kind of seen as an outcast or an outsider.


AMY GOODMAN: Were the reporters able to hear what was going on from more than fifty yards away?


GINA GRAY: No, no, couldn’t hear anything, you know, very hard to get a clear line of sight. Now, it is difficult — Arlington Cemetery is right in the flight pathway of Reagan Airport, so about every three minutes there’s a plane that flies overhead, and that does make it even more difficult to hear anything, regardless of how close or how far away you are.


AMY GOODMAN: Now, Secretary Gates, the defense secretary, got involved with this after there was a piece about your firing in the Washington Sketch that said that you had pushed for more access to the service. What did his office find once they investigated?


GINA GRAY: Well, Secretary — I don’t know if Secretary Gates’s office — I haven’t heard that at all. And I know that Secretary Geren’s office — as you had spoken about earlier, Secretary of the Army Pete Geren’s office is looking into media practices and policies. They are not looking into my firing, but they are looking into how business is conducted there with regards to media policies at Arlington Cemetery. So I think that’s a positive thing, that they’re at least taking the steps to identify kind of where the breakdown is.


AMY GOODMAN: Gina Gray, in other articles I’ve written about your firing, you’ve said that the military had called families to encourage them not to allow the press, is that right? Who was making those calls?


AMY GOODMAN: That was Thurman Higginbotham.


AMY GOODMAN: And why was he encouraging them not to speak to the — not to allow in press?


GINA GRAY: Well, I’m not sure what his motivation is. I’m really — you know, I can’t speak to why he doesn’t like the media. I’m not really sure what that has — you know, the motivation behind that. I know, though, that he did — after the Lieutenant Colonel Hall burial, which started in April, which kind of set everything off, he did call the next family who had offered to have media there at the burial. He had called that family, and then, all of a sudden, they had changed their mind. And there was no real clear answer as to why that had happened.


AMY GOODMAN: Why do you feel it’s important that the press have access, Gina Gray?


GINA GRAY: Well, I think it’s — if the family — and what it has always been about is the family — and if the family says that they do want press there, I believe that in part it’s because they want to be able to share that story of their loved one, that they want to be able to put a face and just the human interest behind another number. And if the family wants that, they should be allowed to have that. The family should be the ones to determine what press coverage means, not the cemetery officials. They have taken that control away from the families, and that’s what I don’t think is right.


You know, the Army and the military have had a policy of open access. It has not been this kind of tightly controlled press box that Arlington Cemetery seems to have done. You know, the military has made great strides and moved forward when it comes to letting the media have access. The embed program is a great example of that. The military has really learned and opened their eyes to how powerful the media can be and what a great story that the military has to tell. And whether you’re for the war or against the war, or the administration or not, it doesn’t matter. The most beautiful thing about Arlington is how we send off soldiers, whether it’s from this war or wars in the past, how we send off our soldiers and marines and airmen and sailors when we give them a burial at Arlington. It’s a beautiful story, and it should be told.


GINA GRAY: That’s correct. Yeah, whether it was a typo or not, I think — yeah, Dana was right — very telling.


AMY GOODMAN: Are you trying to get your job back?


GINA GRAY: No, no. You know, that was — I loved that job. I really truly loved it. I thought it was the perfect job for me over there, and I was excited to take it. I was happy to take it. But, you know, I think that just kind of ruined for me, the experience over there. And I hope that things change. I hope that things change in a positive manner and that I took a stand and something positive will come out of it. But as far as going back there, I think it would be highly unlikely that that would ever happen.


AMY GOODMAN: Gina Gray, I want to thank you very much for joining us. She is the former public affairs director at Arlington National Cemetery, until she was fired.

Suicide or Murder? Three Years After the Death of Pfc. LaVena Johnson in Iraq, Her Parents Continue Their Call for a Congressional Investigation

NEXTSuicide or Murder? Three Years After the Death of Pfc. LaVena Johnson in Iraq, Her Parents Continue Their Call for a Congressional Investigation 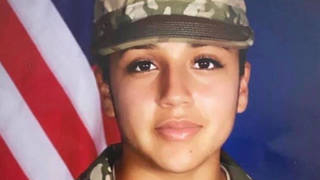 Did the Army Ignore a Soldier’s Murder? Questions Mount over Vanessa Guillén Disappearance