Al Jazeera host Avi Lewis discusses the bizarre story of Allen West, a retired Army lieutenant and congressional candidate who recently accused Al Jazeera of trying to kidnap him after a booker from the network asked him to appear on the show. “I don’t know if it was a kidnapping attempt,” West told the New York Daily News. “But I am not going to entrust Al Jazeera with my life. I said, ‘Cancel the interview!’” [includes rush transcript]

SHARIF ABDEL KOUDDOUS: Avi Lewis is the host of Inside USA, airing weekly on Al Jazeera English. You won’t find it almost anywhere in the United States. Despite a well-publicized launch nearly two years ago, Al Jazeera English is only available in three US markets: Burlington, Vermont; Toledo, Ohio; and Washington, D.C..


Avi Lewis, there was a startling story in the New York Daily News on Monday about a producer of Al Jazeera English trying to book an interview with an Iraq war veteran who was running for a seat in Congress, retired Army Lieutenant Colonel Allen West. Can you talk about what happened?


AVI LEWIS: Well, Keith Olbermann called him out as the worst person in the world the other night. And it’s kind of a funny story and at the same time is shocking. I think there’s a thread of — in this show today of things that people do in election years, what they can get away with and what’s really going on under the surface.


Lieutenant Colonel Allen West is running as a Republican in Florida in a congressional district around Boca Raton. He’s a twenty-two-year Army veteran, and he served in both Iraq and Afghanistan. And one of our guest bookers was trying to reach him to get his — you know, get him on air during the news hour to interview him about rising casualties and how the war in Afghanistan is going. And when, you know, we were — she was pre-interviewing him, and, you know, you pre-interview a number of guests to try to find the right person for the show, and in a courtesy move, which is standard in television, she offered to send a car to pick him up and take him to the satellite studio where he’d do his interview. And when he heard this, he decided to call the FBI and claimed that Al Jazeera was trying to kidnap him, which is hilarious on one level, and on another level — and, you know, and he’s making the most of it in his congressional race, where he’s an underdog, and he’s trying to beat up on Al Jazeera: “I will never participate in a television network which is an enemy of our troops,” etc. So it’s sort of standard election-year hyperbole and cartoonish politics.


But working at Al Jazeera this year has been a crash course for me in the casual and persistent anti-Arab racism that my colleagues, especially Arab American colleagues, at Al Jazeera have been facing for years.


Al Jazeera English is a separate network launched two years ago. It’s a global news network. We have an audience of 120 million worldwide. It’s a very serious, sometimes a little too serious, news network, doing journalism in English around the world, with, you know, access to sixty bureaus worldwide. Al Jazeera Arabic is a network that revolutionized information in the Arabic-speaking world starting in the early 1990s, doing independent journalism throughout Arabic-speaking countries and being thrown out, basically, of almost every country where Al Jazeera Arabic has done independent journalism as a key project of advancing democracy and having independent information in a part of the world where there isn’t enough of it. So, Al Jazeera Arabic has really got it from both sides.


But in an election year in the United States, to have incidents like this is quite shocking. And when we find, when we’re trying to book guests for Al Jazeera English, that the —- to be treated as a quasi-terrorist organization, which is shocking as a serious news organization, goes completely across the political spectrum. In fact, the State Department and the Pentagon are on Al Jazeera English almost daily, because they watch us and know what we do and take us very seriously because of our global audience. But, you know, to get -—


SHARIF ABDEL KOUDDOUS: Avi, we have just under a minute left, but I wanted to ask you briefly —-


SHARIF ABDEL KOUDDOUS: —- about what happened in Burlington, Vermont with Al Jazeera being on TV there.


AVI LEWIS: Well, I mean, you know, Al Jazeera is in very few markets, and you get these local backlashes based on fear and xenophobia. But in Burlington, Vermont, and wherever we’ve been able to develop an actual local viewership, there’s tremendous response. So when the city council tried to yank Al Jazeera from the local cable system, there was a tremendous community response, and Al Jazeera is still on the air. And I think, you know, when people get a chance to watch the channel, they see that it’s a serious news channel, but that doesn’t stop us from being smeared, as Arabs and Muslims are incessantly smeared in the United States. And I think in an election year Democrats and the Obama campaign and others have to stand up and really denounce it, rather than really validating the smears by denying any connection to Islam, as if it was a smear. I think that’s a political mistake, and it’s sad to see.


SHARIF ABDEL KOUDDOUS: Well, we’re going to have to leave it there. Avi Lewis, I want to thank you very much for being with us. Avi Lewis is the host of Inside USA, a weekly program airing on Al Jazeera English. 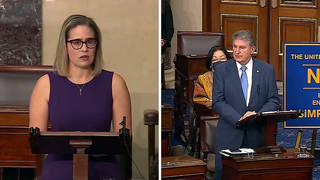