Democracy Now! is Sharper on Miro

Miro is dedicated to improving the quality of online video. They were able to improve the quality of Democracy Now’s online video output. The video was suffering from a condition known as interlace, which causes motion in the image to reveal a bunch of tiny sawtooth lines. Interlacing was a way that television manufacturers in the 1940’s could fake a high frame rate and avoid a visible flickering of the image. On high resolution displays (like computer monitors), the interlaced scan lines become visible and must be processed out (deinterlaced). The image below is an example. 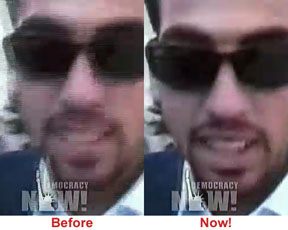 In short, Miro is a free application that turns your computer into an internet TV video player but with higher quality images. Once you download Miro you can use it to watch free internet video channels and play any video file. Don’t forget to subscribe to the Democracy Now! channel!