At Sunday’s massive concert at the Lincoln Memorial, Queen Latifah introduced the story of contralto Marian Anderson, who was banned by the whites-only Daughters of the American Revolution from performing at DAR Constitution Hall. Anderson got to sing at the Lincoln Memorial with an assist from First Lady Eleanor Roosevelt. [includes rush transcript]

AMY GOODMAN: The star-studded lineup of speakers took to the stage one by one, invoking different eras of American history. This is actress and singer Queen Latifah.


QUEEN LATIFAH: This afternoon, we are celebrating not just the inauguration of a new president, but the ongoing journey of America to be America. Through the decades, those looking for the meaning of America have gathered here. In 1939, one of America’s greatest artists, Marian Anderson, was denied permission to sing at Washington’s Constitution Hall by an organization called the Daughters of the American Revolution. She was rejected because of the color of her skin. At the urging of First Lady Eleanor Roosevelt, Ms. Anderson was invited to sing on these steps under the protective gaze of Abraham Lincoln to a gathering of 75,000 people. Ms. Anderson chose as her first song one that expressed her feelings towards her country. She inspired all those who heard her, people who were standing where you are today.


NBC REPORTER: We’re speaking to you from the steps of the Lincoln Memorial in the nation’s capital, from which point the National Broadcasting Company brings you a song recital by the gifted Marian Anderson. We hear now the Honorable Harold L. Ickes, Secretary of the Interior.


HAROLD L. ICKES: When God gave us this wonderful outdoors, he made no distinction of race or creed or color. In this great auditorium under the sky, all of us are free.


MARIAN ANDERSON: [singing] My country ’tis of thee, sweet land of liberty, of thee we sing.

AMY GOODMAN: Marian Anderson singing, as Queen Latifah described, before 75,000 people at the Jefferson Memorial when denied by the Daughters of the American Revolution. This is Democracy Now!, democracynow.org, the War and Peace Report. We go to break and then come back to hear an excerpt of what Barack Obama had himself to say on the steps of the Lincoln Memorial. 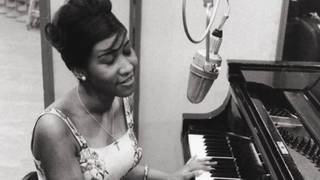