As UC Berkeley Investigates Police Brutality Against Students Protesting Fee Hikes, a Report from Inside the Takeover of Wheeler Hall

The University of California, Berkeley, is investigating allegations of police brutality against students and workers protesting fee hikes and budget cuts last week. Forty students were arrested Friday night after campus police entered Wheeler Hall, which the students had taken over earlier in the day. The students were part of a statewide movement protesting the UC Board of Regents decision to raise tuition by 32 percent. Independent journalist Brandon Jourdan, who was embedded with the students inside the occupied building on Friday, files a report for Democracy Now! [includes rush transcript]

AMY GOODMAN: The University of California, Berkeley, is investigating allegations of police brutality against students and workers protesting fee hikes and budget cuts last week. The university also will request an independent investigation by the Campus Police Review Board.


Forty students were arrested on Friday night after campus police entered Wheeler Hall, which the students had taken over earlier in the day. The students were part of a statewide movement protesting the University of California Board of Regents decision to raise tuition by 32 percent. Students at UCLA, UC Davis, UC Santa Cruz and San Francisco State also took part by taking over campus buildings last week.


On Monday, more than 200 students rallied at Wheeler Hall in Berkeley to protest against what they called overtly aggressive tactics by the police. Organizers say officers hit demonstrators with batons and fired rubber bullets.


Independent journalist Brandon Jourdan was embedded with the students inside the occupied building on Friday and filed this report for Democracy Now! from inside the takeover at Wheeler Hall.


BRANDON JOURDAN: On November 20th at approximately 5:00 in the morning, students occupied Wheeler Hall, a main lecture hall at the school.


STUDENT PROTESTER 1: Right now we’re locked in a building on campus, Wheeler Hall, probably the main campus building at UC Berkeley. There’s tons of people in here. They’re all, you know, shuttling around, making sure that doors are being held shut.


STUDENT PROTESTER 2: This is about solidarity. This is about not only students, but it’s about faculty members, it’s about workers, and it’s about all of us being fed up with this crisis of priorities that there is. They say that it’s a financial crisis, but that’s not the truth. It’s what they value and honor within the education system that’s the problem. We are fighting for a public good. When students come to school in the morning, they will realize that class has been canceled.


BRANDON JOURDAN: Within an hour, police arrived at the scene and broke through the barricades in the basement, attacking students inside with batons and arresting three.


STUDENT PROTESTER 3: They’re using violent tactics. I mean, can you see my back?


BRANDON JOURDAN: Before long, crowds of supporters gathered outside the hall.


STUDENT PROTESTER 4: The demands that we have today, right now, are that we receive amnesty, those of us that have been acting and having demonstrations across the UC system. We’re also asking that the Bear’s Lair, which is the only immigrant-owned business on campus, get a fair contract. We also are asking that one of the housing, the apartments, that is affordable housing for students here, Rochdale Hall, remains as it always has been for a $1 a year lease to the students’ co-op. And we’re also asking that the thirty-eight workers, AFSCME workers, are rehired here on the UC Berkeley campus.


STUDENT PROTESTER 5: This action is in solidarity with occupations that have occurred so far at UC Davis, UCLA, UC Santa Cruz, SF State. We hope these continue.


BRANDON JOURDAN: Striking workers and students set up picket lines and surrounded the building, while police cordoned off the entrances.


STUDENT PROTESTER 6: You think you need to get to class. Keep in mind, the class you’re getting to, the quality of that education is being cut into. That’s why people are sitting down to protest. That’s what people are taking a stand against here.


BRANDON JOURDAN: Inside Wheeler Hall, the police worked steadily to open the doors and get the occupiers out, while a students-police liaison tried to negotiate their demands.


POLICE OFFICER 1: This is the Police Department. Unlock the doors now!


STUDENTS-POLICE LIAISON: We have demands!


BRANDON JOURDAN: Outside, a heavy rain had started, but people stayed to support the occupiers.


PROTESTERS: We are the teachers! The mighty, mighty teachers!


BRANDON JOURDAN: A group of Native American organizers arrived, reminding people that the week marked the fortieth anniversary of the occupation of Alcatraz, and showed their support for the students.


NATIVE AMERICAN ORGANIZER: It’s an honor to have with me Dr. LaNada War Jack, an original organizer of the Third World Movement of 1969. We’re here to show solidarity for the occupiers.


BRANDON JOURDAN: The police were hampered, time and again, by the thousands of people who had come to support the occupation.


BRANDON JOURDAN: The police asked to be allowed inside to negotiate the students’ demands. But the students insisted any negotiations be held in public.


STUDENT PROTESTER 4: Unfortunately, I have to say that it seems like the police are telling the people outside one thing and telling us another thing. They have asked to negotiate with us and speak with us, along with a professor that has been an outspoken proponent of what we’re doing for a long time, Professor Ananya Roy, and a few other administrators. And we did agree to that, but that it happen outside, that those folks remain outside, we remain where we are inside, so that the rest of the students, faculty, workers that are outside can participate in the conversation, as well. They’re also stakeholders, and they have a right to participate, and they have said to us that they want to participate in that conversation.


BRANDON JOURDAN: But when the police refused, the students braced themselves for police entry.


POLICE OFFICER 3: Everybody, Stay seated, until you’re stood up.


BRANDON JOURDAN: Due to the presence of an unrelenting crowd, the occupiers of the building were allowed to leave after being cited. The crowd outside roared with cheers as the students were escorted out of Wheeler Hall. After over twelve hours of occupation, forty-three people from inside were arrested. Forty people were charged with misdemeanor trespassing, and three persons arrested early in the day were charged with felony burglary charges. Although none of the students’ demands were met, participants view it as a massive victory, the real prize being the birth of a new movement.

AMY GOODMAN: Report by independent journalist Brandon Jourdan, and co-produced by David Martinez, with additional footage from Josh Wolf and stills from Andrew Stern. Brandon Jourdan and Josh Wolf were both among the forty people who were arrested and charged with trespassing. On Monday, UC Berkeley announced it will request an independent probe into allegations of police brutality during the crackdown. 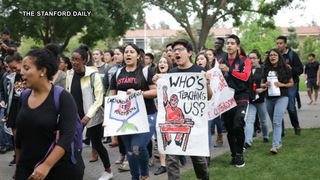