A new study on healthcare lobbying published in the Chicago Tribune has found that healthcare companies have spent $635 million on lobbying over the past two years. At least 166 former congressional aides involved in shaping healthcare legislation have registered to lobby for healthcare companies. This includes at least fourteen former aides to House Majority Leader Steny Hoyer and at least thirteen former aides to Montana Democratic Sen. Max Baucus, the chair of the Finance Committee. [includes rush transcript]

StoryJul 17, 2017From Pence to Price: How Big Tobacco Gained Massive Influence Under Trump, Plans to Expand in Africa

AMY GOODMAN: At the time of this broadcast, the Senate is voting on the second of three procedural votes to end the healthcare debate, moving Democrats one step closer to passing a major healthcare bill by Christmas Eve.

On Monday, Democrats secured a crucial victory shortly after 1:00 a.m. on a party-line vote of 60 to 40 to end a Republican filibuster of the bill. President Obama hailed the vote as “historic” and congratulated lawmakers for what he said was defying special interests.


PRESIDENT BARACK OBAMA: The United States Senate knocked down a filibuster aimed at blocking a final vote on healthcare reform and scored a big victory for the American people. By standing up to the special interests who have prevented reform for decades and who are furiously lobbying against it now, the Senate has moved us closer to reform that makes a tremendous difference for families, for seniors, for businesses and for the country as a whole.

AMY GOODMAN: The President claims lawmakers stood up to special interests, but a new study tells a very different story. The study is published in the Chicago Tribune. It reveals how healthcare lobbyists have influenced and shaped healthcare reform and finds there’s a, quote, “revolving door between Capitol Hill staffers and lobbying jobs for companies with a stake in health care legislation.” According to the study, at least 166 former congressional aides involved in shaping healthcare legislation have registered to lobby for healthcare companies and that healthcare companies have spent $635 million on lobbying over the past two years.


The study is based on an analysis of public documents by Northwestern University’s Medill News Service in partnership with the Tribune Newspapers Washington Bureau and the Center for Responsive Politics.


Andrew Zajac is the reporter who wrote the story for the Chicago Tribune. He’s the national correspondent for Tribune Newspapers, and he joins us from Washington, DC.


Welcome to Democracy Now!, Andrew. Just explain to us what you found.


ANDREW ZAJAC: We looked at former employees of the five key committees which were involved in shaping healthcare legislation, people who in the past had worked for those committees, and matched those identifications with lobbying registrations. That’s how we got at the number of — I think it’s 166 former staffers and thirteen former members of those committees that are involved in lobbying healthcare issues.


AMY GOODMAN: Talk about the significance of the number of staffers from — well, in the House, you talk about the House Majority Leader Steny Hoyer and, significantly, in the Senate, the Senate Finance Committee chair Max Baucus.


ANDREW ZAJAC: Right. There’s — I think the overall — this is kind of an old story. People have been making a living through the revolving door in increasing numbers for probably the last thirty years. It’s a relatively recent phenomenon in Washington, but it is established now, and it’s an established career path. You put in your time on the Hill, and then you move out as a lobbyist. You have a brief cooling off period. I think there’s a year or two where you can’t lobby your former bosses. But essentially you move out, and you can double or triple or even maybe quadruple your salary.


But in this instance, I think what’s significant is that there’s already a dominance of business and corporate interests in lobbying in Washington. They already have the edge, in the sense that they’re the best funded, they’re the greatest number of groups, they’re — they take up a lot of the oxygen. And on top, they’ve magnified their advantage. The impact of these people working for these special interests — for pharmaceutical companies and hospitals and doctors and so forth — is it magnifies the advantage that corporate interests have, and it squeezes out room for other kinds of conversation. A lot of opinion polls show that a majority of Americans would have liked a public option, for example. That simply wasn’t going to be feasible, given the sheer array, the power and the resources that the corporate interests could bring to bear, including being able to hire all of these insiders who have the connections and the understanding of how the Hill works. It has the effect of magnifying the advantages that corporate interests have and also sort of shrinking the playing field for the available options, the available alternatives for how we fix healthcare.


AMY GOODMAN: You quote Bob Edgar, president of Common Cause, blaming “a toxic cocktail of insiders and money” for short-circuiting a government-run plan that would have competed with private insurers.


ANDREW ZAJAC: Right. There are two things going on here. One, you have the money to hire the top-shelf lobbyists. But then, in addition, those lobbyists come bearing your gifts, the resources, the campaign resources of their clients. So it’s a kind of a double whammy. You have the expertise, but then you also have the campaign contributions that these corporate interests can also bring with them.


And this is also reflective of the system that we have in Washington. We don’t have public financing of campaigns. And over the last thirty or so years, coinciding with the rise of this sort of growing professional class of lobbyists, you have increasingly expensive political campaigns. So you have these lawmakers who need to raise money. That’s just the reality. And these are the interests that have it. So, not only are they dealing with familiar faces, in many cases — the former staffers, people who they know and who they presumably have a certain comfort level with — but those people are also in a position to steer them to the campaign contributions they need to stay in Washington.


AMY GOODMAN: You begin with a story of David Nexon. Tell us what his problem is.


ANDREW ZAJAC: Well, David Nexon is the vice president for policy for AdvaMed, which is one of two large — two representatives or trade groups for device makers, artificial hips and stents and people who make products like that. He, by the way, is a very highly respected figure, has a PhD in economics and was an adviser to Ted Kennedy for many years before he moved into working for AdvaMed a few years ago.


But they were unlike some of the other interests in Washington, PhRMA most notably, which made a deal very early on, saying, “We’ll contribute $80 billion,” I think the number was, to the healthcare deal, the money that’s needed to expand coverage. The device makers didn’t make a deal early on. So, near the end of the process, they were hit with a $40 billion tax. And Nexon basically was in a position to persuade — help persuade lawmakers to whittle that down to $20 billion. It’s still a lot of money, but it’s a lot less than $40 billion.


And he was a — I mean, he’s a good example of somebody with just an absolutely first-class pedigree who is extremely valuable to a corporate interest on the Hill, obviously, and working with him, we counted at least fourteen lobbyists who had Hill experience, including, I think, about ten who worked on the committees involved in shaping legislation. So you have somebody who has an extremely high level of credibility, just because of his work on the Hill previously, and then he’s assisted by all these people who have connections on the various committees. So it was a situation where you’ve got, as I mentioned earlier, that combination of expertise and also connections.


AMY GOODMAN: Andrew Zajac, you not only have, you know, the access, of course, that these former staffers for people like Max Baucus, who then go to lobby and can come back, and they know their, you know, bosses well on Capitol Hill, but you have what they do as staffers, that period leading up to when they go to be lobbyists. For example, Billy Tauzin, the former congressman, extremely powerful in shaping the drug legislation, then becomes head of PhRMA. Can you talk about the significance of that?


ANDREW ZAJAC: Well, that caused such a storm of controversy that I think there was at least some — there were some cosmetic changes, I believe. There were restrictions placed on the access that lobbyists would have to the House floor, I believe. There were some efforts to restrict the most visible elements of access once Representative Tauzin went over and became the head of PhRMA. He’s the classic example, because that was a very, very generous drug benefit, and it included the provision that Medicare could not negotiate on price. So, essentially, it was very, very lucrative to pharmaceutical companies and very expensive to the public treasury and to citizens. And Tauzin is a very good example of a sort of a high-profile person from Congress.


There are other examples. I think Richard Baker, a former chair of one of the — House Financial Services Committee, is the head of the hedge fund association, as another example. Just tremendous value to the expertise that these people have, their connections, as well.


AMY GOODMAN: And so, finally, Andrew Zajac, your conclusion, as President Obama talks about, well, the legislation that was just passed. It’s got three hurdles. The first two have been just passed, just in the last five minutes. The Senate Democrats cleared the second of the three sixty-vote hurdles on President Obama’s healthcare overhaul. That just took place. When he says this is a great victory over special interests?


ANDREW ZAJAC: He may be overstating it a little bit. I think it’s a half a loaf. I think he understands that. I think he needs to try to sell it this way. But I don’t think it’s — his way of doing the bill, of trying to get a bill, was to bring all the special interests to the table. So it’s heavily shaped by special interests. There’s no other way of looking at it, really.


AMY GOODMAN: Well, we will link to your report, Andrew Zajac, national correspondent for Tribune Newspapers. The number of lobbyists that come from the most powerful men in Congress right now, in the Senate and the House, were shaping healthcare reform. Also, that number of more than $600 million over the last two years spent on lobbying. 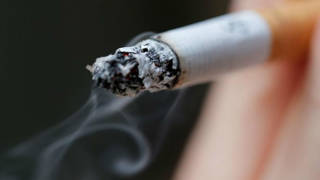 From Pence to Price: How Big Tobacco Gained Massive Influence Under Trump, Plans to Expand in Africa