We take a look at some of the more unusual businesses and interest groups lobbying Congress on climate change issues. A new Center for Public Integrity analysis of federal records shows that the 140 companies that joined the fray for the first time late this year include venture capitalists, the natural gas lobby, and America’s most iconic soup maker, Campbell Soup. [includes rush transcript]

AMY GOODMAN: We move now to some of the more unusual businesses and interest groups lobbying Congress on the issue of climate change. Food companies like Campbell Soup and venture capitalists aren’t the first corporate interests that come to mind when we think of the climate change lobby on Capitol Hill. But a new Center [for] Public Integrity analysis of federal records shows that the 140 companies that joined the fray for the first time late this year include venture capitalists, the natural gas lobby, America’s most iconic soup maker Campbell Soup. The sheer range of interests registered to lobby on climate change is expected to create further delays in the Senate’s effort to complete a successful bill to curb fossil fuel emissions.

We’re joined now in Washington, DC by a staff writer for the Center for Public Integrity, Marianne Lavelle, one of the author’s of the new report, “The Climate Lobby from Soup to Nuts.”


MARIANNE LAVELLE: Well, it’s far more complicated than just lobbying against climate change legislation. If you take the soup makers, for instance, what they’re concerned about is that they’re not getting a fair shake compared to the manufacturers of steel and aluminum and all of those other manufacturers. So what they’re lobbying for is really a piece of the pie. As you know — you’ve talked about cap and trade — the way the government enforces the cap in a cap-and-trade system is by giving out these pollution permits to anyone who emits carbon. Well, the political deal was cut in the House to give out a number of those permits free to certain industries. And certainly the heavy users of energy got a lot of those permits. Well, along come manufacturers like Campbell Soup and Kellogg’s and Del Monte. They don’t use as much energy, but they do produce food. They would have to buy these allowances, the way the House bill is structured now. They want to make sure that the Senate considers them when the Senate takes up this bill.


AMY GOODMAN: Overall, give us the landscape of the lobbyists and the amount of money they’re pouring in around global warming legislation.


MARIANNE LAVELLE: Well, of course, the lobbyists don’t have to report all of the money they’re spending, all of the advertising, all of the public relations and the astroturf and grassroots lobbying. But the traditional lobbying, where they hire very well connected K Street lobbyists to go up to Capitol Hill and plead their case, we figure they’re spending about $30 million every quarter to really press their case on Capitol Hill. So, you know, we’re nearly $100 million a year there.


AMY GOODMAN: North Dakota Democratic Senator Kent Conrad said, “Climate change in an election year has very poor prospects.” If only climate change had poor prospects. The fact is, it’s happening whether or not legislation is passed. But the most powerful lobbies right now on Capitol Hill?


MARIANNE LAVELLE: When we look at the landscape for climate change lobbying, the number one, in number, are the manufacturers, who use a lot of energy, who don’t want their energy costs to rise. And so, they, followed by the oil and the gas and the coal industries, they’re really trying to either fight or slow down any climate policy. And that definitely makes it difficult for Congress in any year, and certainly as we get closer and closer to the election, to make a decision to do something about these fossil fuel emissions that are really behind the greenhouse effect.


AMY GOODMAN: And Marianne Lavelle, were you surprised by the level of lobbying that’s going on and the new lobbyists that are entering the fray at this moment?


MARIANNE LAVELLE: What’s interesting is the — many of the new lobbyists are folks who really would like to see a price on carbon and would like to see some stronger action on climate, and they feel they haven’t had as much of a voice. There are venture capitalists, for instance, who are trying to invest in alternative energy, like solar, wind, geothermal. They feel that what Congress is looking at right now is really too mild or too slow of a program, it’s not going to bring the capital into those alternatives, they’re not going to be able to compete with cheap coal in a five-to-ten-year time frame. And that’s what investors really are looking at when they think about putting money into new technology. So they say if we don’t act strong — strong action now means less cost in the long run, because you’ll bring capital into that — into these new emerging markets.


AMY GOODMAN: Well, Marianne Lavelle, I want to thank you for being with us, staff writer at the Center for Public Integrity. We’ll certainly link to your report.


And we’re going to end today with, well, going back to the last day of the Copenhagen climate summit. I was walking outside the Bella Center, where the summit was taking place. There used to be thousands of people there, but then civil society was locked out. And there was just a small group of people, well, quite literally pulling out their hair, a group of young people who were shaving their heads. This is one of them.


PROTESTER: I’m trying to express my emotions with this, how really deeply touched I feel about what is happening inside there, because nothing is happening, or really not enough. And yeah, there are six billion people out there, and inside they don’t seem to be talking about them. But, yeah. And what — I mean, there will — I guess there will be an outcome, but it’s really not enough, and it’s really not what we need to do.


AMY GOODMAN: And what does your sign say? It looks blank.


PROTESTER: It says nothing, because I don’t know what to say anymore.

AMY GOODMAN: A young woman shaving her head, holding a sign with just quotation marks. And as you heard her say, I have nothing left to say. 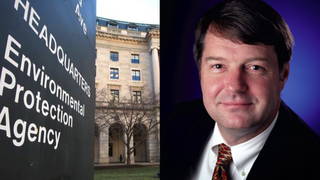