We are in Copenhagen, Denmark, where more than 15,000 participants from 190 countries are taking part in the two-week climate change summit. On Sunday, Democracy Now! producers Mike Burke and Elizabeth Press spoke to several delegates, activists and journalists from across Africa, from Ethiopia to Swaziland. [includes rush transcript]

AMY GOODMAN: We are here in Copenhagen, Denmark, where more than 15,000 participants from 190 countries are taking part in the two-week climate change summit. On Sunday, Democracy Now! producers Mike Burke and Elizabeth Press spoke to a number of delegates, activists and journalists from Africa about how climate change is impacting the world’s second-largest continent.


CHIKONDI JUMA: My name is Chikondi Juma. I’m from Malawi. I’m a journalist. I work with a private radio station called Capital FM.


Yeah, Malawi being a developing country, it is affected in many ways. It is an agro-based economy. So, because of the changes in climatic conditions, most of the times we don’t have adequate rains, or sometimes we have too much of it, and we have droughts and then floods. And also health conditions, there is a lot of mosquitoes, so malaria cases go up.


So I believe that the United States and the other countries, all the rich countries, they need to do something, because, like, a poor country like Malawi, I don’t think there’s nothing that we can do. We want to get developed, but we can’t, because we are affected by climate change. I believe that the rich countries can do something by either reducing the emissions and, of course, providing some money for developing countries to also put up some adaptation measures and the mitigation measures for this climate change thing.


TITUS DLAMINI: I’m Titus Dlamini. I am from Swaziland. I’m here in my capacity as the country’s coordinator in matters of management of protected areas under the Convention of Biological Diversity. The impacts of climate change will not discriminate, whether in Swaziland or anywhere else, whether a small country or a big country, whether you have contributed in a small way or in a significant way. One way or the other, the impact will be felt. So we felt that it’s important that we come and our voice is heard and we’re part of the discussions that they are seeking to come up with.


SAMWEL NAIKADA: Yeah, my name is Samwel Naikada, and I am from Kenya. I have come here for the conference for climate change. I’m actually from an indigenous group called the Maasai people, who are a people who are actually depending on a forest and livestock. So we are here as indigenous people to also try and see what actually the government are going to pass in terms of the various sectors which are being discussed in climate change. We are experiencing a lot of drought, and our livestocks are dying. And our people are also dying. And there’s no sufficient food. There’s no water. There’s a whole problem of health. There are so many diseases coming up. And being people who depend on forests and livestocks, we have a lot of problem, because we depend on hives from the forest, we depend on honey from the forest. They’re not there anymore, because the whole climate has really changed everything.


IYABO ONIBOKUN: My name is Eunice Onibokun. I’m from Nigeria. I’m representing an NGO and have come to attend the COP15. I’m a teacher, have a school in Nigeria. And I’ve actually been organizing talks and meetings in local areas, in villages, so that — because the children are the leaders of tomorrow, and we need to start to carry them along with us now, let them know what climate change is, because, like, we all know that climate change will affect everybody, whether you are a man, a woman, you are young, you are old. You know, there’s no exception. It’s a global issue which needs a local solution.


Well, you look at Niger Delta now, we are talking about, you know, the pollution of the water. Most of the people there, they are fishermen, and you see with the oil spill, we are having a lot of our waters being polluted. Then you look at the Bar Beach, for example. You see the ocean such. A lot of people have been displaced. And you look at areas like in the north, there is a lot of encroachments of deserts. And this is affecting, you know, both food production, when you look at the aspect of security, and from the health aspect of it, you have a lot of people dying of droughts, you know, because there’s not enough water, you know, for even the camels, the animals like the cows. And it’s really affecting food security and production.


YINKA ADEYEMI: I’m Yinka Adeyemi. I’ve come from Ethiopia, work for United Nations. Hopefully, something will come up around adaptation, around mitigation, around finance, around technology transfer for Africa, because by 2050 or so, we are told that many, many coastal cities in African countries may disappear. You know, so we are not about to just sit tight and let this happen without a fight.


ISABELLA MASINDE: My name is Isabella Masinde. I come from Kenya. I work for an NGO known as African Wildlife Foundation, but I have been asked by the Kenyan government to come here as an adviser, a technical adviser on climate change.


And one of the issues that we feel must be addressed by this meeting is the issue of adaptation, compensating the African nations to be able to adapt to the face of climate change, because Africa has done very little to cause this problem. So we feel that the developed nations who are responsible for causing most of the global warming should support African countries so that they can adapt to the effects of climate change.


But when we had a drought last year in Kenya, prolonged drought, people had to move to places where they thought they could find grazing lands for their livestock. People had to move to places where they could find water, because most of the traditional water sources dried up. So they have to be pushed to other places. Either the species have to move high up in the mountains, and also people move, you know, trying to do farming in places where they’re not supposed to, like on the hilltops. So that creates environmental refugees. When the droughts ended, the floods set in. And now these floods also cause environmental refugees, because people have to move from lower grounds to higher grounds. And then that causes conflicts, because there are already people who claim that they — you know, these places belong to them.

AMY GOODMAN: African delegates, journalists, observers coming in to the UN climate change conference on Sunday, coming to get their credentials, waiting outside because of a bomb threat. Well, actually, it was a suitcase that people were concerned no one had claimed. That took hours of people standing outside, so Democracy Now!’s Elizabeth Press and Mike Burke used the opportunity to speak to some of the hundreds of people who had gathered there.

Climate Change and the Global South: A Roundtable Discussion

NEXTClimate Change and the Global South: A Roundtable Discussion 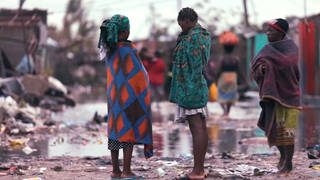