President Obama hosted a White House summit Thursday on reforming healthcare. While President Obama said every idea must be considered, the idea of creating a single-payer national health insurance program appears to have already been rejected. We speak to Harper’s senior editor Luke Mitchell, author of the article “Sick in the Head: Why America Won’t Get the Health-Care System It Needs.” [includes rush transcript]


PRESIDENT BARACK OBAMA: In this effort, every voice has to be heard. Every idea must be considered. Every option must be on the table. There should be no sacred cows. Each of us must accept that none of us will get everything that we want and that no proposal for reform will be perfect. If that’s the measure, we will never get anything done. But when it comes to addressing our healthcare challenge, we can no longer let the perfect be the enemy of the essential.

JUAN GONZALEZ: While the President said every idea must be considered, the idea of creating a single-payer national health insurance program has already been rejected. White House spokesperson Robert Gibbs said Thursday, “The President doesn’t believe that’s the best way to achieve the goal of cutting costs and increasing access.”


Initially, no supporters of single payer were invited to the summit. After protests were called, the White House invited Democratic Congressman John Conyers and the president of the Physicians for a National Health Program.


AMY GOODMAN: Single-payer advocates have also been largely silenced in the media. A new study being released today by FAIR, Fairness and Accuracy in Reporting, found the views of advocates of single payer have only been aired five times in the hundreds of major newspaper, broadcasts and cable stories about healthcare reform over the past week. No single-payer advocate has appeared on a major TV broadcast or cable network to talk about the policy during that period.


Well, to talk more about this, we’re joined by Luke Mitchell. He’s senior editor at

Harper’s Magazine. His article in the February issue is called “Sick in the Head: Why America Won’t Get the Health-Care System It Needs.”


LUKE MITCHELL: Thank you for having me, Amy.


AMY GOODMAN: So, why isn’t single payer being considered? Why has it been rejected out of hand? Why do you think it’s the only answer?


LUKE MITCHELL: Well, it’s amazing how far — how out of hand it’s been rejected. Max Baucus said a couple of months ago that everything is on the table. Max Baucus, the US senator who’s going to have a big hand in coming up with whatever reform we do see this year, said everything is on the table, except single payer. He went out of his way to say that we can’t have single payer.


And I think there are a couple of reasons why they’re so explicitly rejecting it. One of them is that it’s a threat to a great deal of people who are making a lot of money right now, which is to say the insurance companies. A single-payer system would take a lot of money out of the insurance system, the private insurance system. And it’s also something that a lot of people in Washington understand as ideologically threatening, that is to say, they equate a single-payer system with what they call, quote, “socialized medicine,” unquote.


So I think what Obama is trying to do is neutralize that threat and get, as he said, the imperfect rather than nothing. And maybe he’s right. There’s clearly a massive resistance to single payer on the Hill.


JUAN GONZALEZ: And this is especially surprising given the fact, as you say in your article, that as recently as 2003 Obama himself said he favored single-payer health insurance.


LUKE MITCHELL: That’s right. That’s right. When I started my Harper’s article, what I wanted to understand is why this approach to healthcare, single payer, which is used in most of the wealthy Western nations, which is much more efficient, which is much more equitable, which is much more amenable to making people healthy, is so far out of the mainstream in the United States. And I think what I found in the article was that — that it’s purely a mental blockage. That is to say that even if you can make the argument, the practical argument, for it — and we can talk about that in a minute — people still don’t want it.


AMY GOODMAN: But we’re in a different time.


AMY GOODMAN: It has — you know, the politicians have said that it’s not doable before, but now we are facing a mass crisis, mass unemployment, tens of millions of people without insurance. Even those who have it are having trouble. I wanted to go to Obama yesterday speaking about, at this healthcare summit, the costs of healthcare. In a minute, we’ll go to that. But the times have changed. We’re talking about bailing out banks.


LUKE MITCHELL: Yeah. Well, and indeed, this strikes me as a tremendous opportunity. On the other hand, the idea of universal healthcare was completely out of favor, you know, ten years ago, as well. So we are moving in a positive direction. You know, just a few years ago, the President was able to — found it politically feasible — President George W. Bush found it politically feasible to veto a bill that would insure children. That’s changed.


JUAN GONZALEZ: I wanted to ask you about a company that you mentioned in your article in Harper’s that most Americans have never heard of, but which may benefit a lot from all of this healthcare reform, especially since Obama is talking about computerization of medical records, using stimulus money for that: McKesson.


JUAN GONZALEZ: Who is McKesson, or what are they?


LUKE MITCHELL: McKesson is the eighteenth largest corporation in the United States. I actually, when I lived in San Francisco, lived a few blocks from their headquarters, had never heard of them. And as I was researching my Harper’s article, I came across a book by their CEO, John Hammergren, called Skin in the Game, where he was making an argument, basically that was the opposite of the argument for single payer. He was arguing that when you use market solutions, you have a much more efficient system, which I did not find to be a compelling argument.


But he, in making that argument, brought something else to light that was fascinating, which is that he wanted to have more information in the system. And that’s what his company does. They make — among many other things, they process 80 percent of the prescriptions in the United States. It’s more than eBay and Amazon combined, in terms of processing individual orders. And they make all these various computer systems for communicating your health to your doctor and your doctor communicating your health finance to your insurer. That’s obviously going to be a growing business. And one of the things Obama talked about today — yesterday was making that business something that is more useful to people at the ends rather more useful to the people trying to make a profit from it.


AMY GOODMAN: —- in the media, just explain what it is.


LUKE MITCHELL: Well, it’s —- one of the phrases you hear about single payer is “Everybody in, nobody out.” That is to say, in a single-payer system, you don’t have a system for deciding who gets treatment. So, you have one payer, obviously the single payer, usually the government, though it could be a government corporation or some other entity, like a utility. And -—


LUKE MITCHELL: Precisely. In fact, there’s a bill — and this is the amazing thing. John Conyers actually wrote a bill several years ago, HR 676. It has 100 sponsors, more or less, on the Hill. And it’s also known as the Medicare for All Act. And it would essentially expand Medicare to every American.


The advantages of single payer are much more than just coverage, though. But it does solve the first moral problem, which is that there are 50 million Americans — now 46, because the Children’s Health Insurance Program has passed —- 46 million Americans without insurance. And it immediately solves that problem. But it also introduces huge savings into the system, because you don’t have this massive overhead.


And finally, it introduces smart incentives into the system. Right now, the incentive of a private insurer is to keep you healthy as long as you have insurance. And as soon as you don’t have insurance, they don’t care. So, all Americans are going to enter Medicare at sixty-five, even with supplements, and that means the private insurers don’t have such an interest in keeping you healthy after you’re sixty-five, so they don’t encourage things like smoking cessation or weight loss or any of the other things that they would do to keep you going.


AMY GOODMAN: And yet, right now they say it is unfeasible. The idea of having a middleman in the middle making a profit is what is being considered, even with universal healthcare.


AMY GOODMAN: Unless it were to change.


LUKE MITCHELL: Well, you had mentioned Obama himself has said repeatedly that single payer is the best approach, but there are a lot of built-in players that need to be dealt with. And I think that’s a true observation of reality in America today. And certainly, the universal health programs we are seeing on offer right now basically act to bribe those middlemen into not complaining too much. What we have is a mandate system. Pretty much every Democrat who has proposed a system has said we’ll have a mandate, maybe a universal mandate. But it basically requires you to buy private insurance. If you can’t afford the private insurance, the government will fund you. So it’s not a market system exactly; it’s basically government-funded private insurance. And the reason I think that people, normal people, might find that preferable is that normal people have a sort of a preference for what they think of as market solutions. They think this will somehow be more efficient.


AMY GOODMAN: Or perhaps this other system has never been explained to them before.


AMY GOODMAN: Well, Luke, I just want to say thank you for explaining it to us. We will continue to follow this issue, of course, one of the most important issues in this country today. And we will link to your article at Harper’s Magazine. Luke Mitchell, senior editor at Harper’s Magazine, his piece is called “Sick in the Head: Why America Won’t Get the Health-Care System It Needs.” 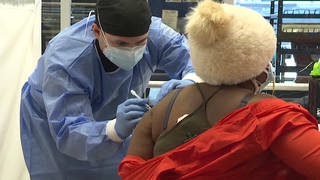