Report: Senator Max Baucus Received More Campaign Money from Health and Insurance Industry Interests than Any Other Member of Congress.

Montana Senator Max Baucus, the chair of the Senate Finance Committee, is the Senate’s point man on healthcare reform. A new article in the Montana Standard finds that Senator Baucus has received more campaign money from health and insurance industry interests than any other member of Congress. The article says, “In the past six years, nearly one-fourth of every dime raised by Baucus and his political-action committee has come from groups and individuals associated with drug companies, insurers, hospitals, medical-supply firms, health-service companies and other health professionals.” [includes rush transcript]

Montana Senator Max Baucus, the chair of the Senate Finance Committee, is the Senate’s point man on healthcare reform. Over the past few weeks, he’s held a series of hearings on the issue. Senator Baucus has said a national single-payer healthcare system is “off the table,” has refused to include any single-payer advocates in the committee hearings. He eventually met with single-payer advocates after a series of protests, in which thirteen people were arrested after being thrown out of his hearings. However, he expressed no willingness to reverse his principled opposition to a single-payer system that would eliminate for-profit healthcare.

Now, a new article in the Montana Standard finds Senator Baucus has received more campaign money from health and insurance industry interests than any other member of Congress. The article says, “In the past six years, nearly one-fourth of every dime raised by Baucus and his political-action committee has come from groups and individuals associated with drug companies, insurers, hospitals, medical-supply firms, health-service companies and other health professionals.”

The article was written by Mike Dennison, a reporter for the Montana Lee Newspapers State Bureau. He writes for four daily newspapers in Montana and covers healthcare closely. He recently interviewed Senator Baucus twice on the issue. He joins us by Democracy Now! video stream from his home in Helena.

Mike, welcome to Democracy Now! Go through the financial support that Senator Baucus gets from the health insurance industry.

We’re talking about the health insurance industry and the health industry, which is HMOs, hospitals, physicians, pharmaceutical companies — that’s probably where the bulk of his money has come from. The report that we prepared showed, out of about almost $15 million he’s raised in the last six years, both for his campaign and his leadership PAC, 23 percent of that came from insurance and health interests, and about 18 percent of that was from the health sector and a large amount from pharmaceutical — not the companies, but people who work for pharmaceutical companies and pharmaceutical PACs, about $830,000 just from that sector alone. The total amount was about $3.4 million, which we believe is probably more than any other member has received.

In terms of the percentage, however, you look at Charles Grassley, the ranking member of the — ranking Republican on the Senate Finance Committee, which Baucus chairs, he received 23.5 percent of his money from the health and insurance sectors during that same time period. And also, you look at, for instance, Senator Christopher Dodd from Connecticut, who’s been more or less running the Senate Health Committee meetings in the absence of Ted Kennedy, he received about 23 percent of his funds from the same sectors, as well. But in terms of straight dollars, I think Baucus is probably the top dog.

President Obama was confronted recently about Senator Baucus’s financial ties to the insurance industry. It was at a town hall meeting in Rio Rancho, New Mexico, in mid-May. He was questioned by a local resident, Linda Allison.

LINDA ALLISON: My question is, so many people go bankrupt using their credit cards to pay for healthcare. Why have they taken single payer off the plate? And why is Senator Baucus on the Finance Committee discussing healthcare, when he has received so much money from the pharmaceutical companies? Isn’t it a conflict of interest?

PRESIDENT BARACK OBAMA: If I were starting a system from scratch, then I think that the idea of moving towards a single-payer system could very well make sense. That’s the kind of system that you have in most industrialized countries around the world. The only problem is that we’re not starting from scratch. We have historically a tradition of employer-based healthcare. And although there are a lot of people who are not satisfied with their healthcare, the truth is, is that the vast majority of people currently get healthcare from their employers, and you’ve got this system that’s already in place. We don’t want a huge disruption as we go into healthcare reform, where suddenly we’re trying to completely reinvent one-sixth of the economy.

That’s President Obama not answering the question about Senator Baucus’s health insurance financial ties. The resident who asked the question, Linda Allison, says she was partly inspired to raise the point after seeing Democracy Now!’s coverage of single-payer advocates that morning who disputed Baucus’s hearing. Have you asked, Mike, Senator Baucus directly about his financial ties to the health insurance industry and the health industry?

Well, I haven’t spoken — well, a little bit. We got statements from his office last week about why — what he has to say about the money he’s receiving. And what he said was, “Well, sure I’ve got a lot of money, but we have to raise money, and this is how we do it. And there’s many times when I have gone against the health insurance industry in the plans that I’m proposing.” And he listed out several times.

He said that before, that we’re going to have guaranteed issue of health insurance, we’re going to squeeze the insurance industry a little bit. But at the same time, they’re actually supporting some of these changes, because in the bills that are being prepared, everyone’s going to be required to buy insurance. There’s going to be individual mandates. And as far as the drug companies and the hospitals, I’m not so sure we have examples there where they’re really going to give up too much.

What we’ve asked Senator Baucus is, where are the people who are making all the money from healthcare going to give? Where is going to be the people who have been profiting who have to give up something? Where? And he has answered us a little bit, but it’s not something he comes out and says a lot.

Mike Dennison, what about the constituents? What about Montanans? As we traveled through Montana, from Missoula to Helena to Bozeman, there were many healthcare activists who would come out to all the different events. What is the constituency of Montana saying to Senator Baucus?

Well, I went to some of the meetings he had about three weeks ago. There was twenty across the state in various communities. And a lot of the people there at those meetings were saying, “Why no single payer? Why isn’t it being considered, at least?” And even for the people who weren’t single-payer advocates, I got the sense the majority of the people at the meetings that I went to and the coverage that I read were saying to Senator Baucus, “Please give us something that works. Please give us something that addresses the problems out there. Don’t just give us a corporate healthcare reform plan.”

And how does he respond to his constituents?

Senate Majority Leader Harry Reid has at least $50,000 invested in a healthcare index.

Republican Senator Judd Gregg, a senior member of the Health Committee, has up to $560,000 worth of stock holdings in major healthcare companies, including Bristol-Myers Squibb and Merck.

The family of Democratic Congresswoman Jane Harman held at least $3.2 million in more than twenty healthcare companies at the end of last year.

Senator Kerry, John Kerry, and his wife Teresa Heinz Kerry hold at least $5.2 million in companies such as Merck and Eli Lilly.

The Senate Health, Education, Labor and Pensions Committee plans to hold a key hearing today to discuss healthcare reform. On that twenty-two-member panel, at least eight Senators have financial interests in the healthcare industry. The hearings will be held by Democratic Senator Chris Dodd, whose wife serves on the boards of four healthcare companies. She received more than $200,000 in salary and stock from her service last year.

And Republican Senator Johnny Isakson holds at least $165,000 in pharmaceutical and medical stocks.

DR. QUENTIN YOUNG: Well, it’s appalling, and I think your listeners can see how the republic is in danger. Our Congress people are paid huge amounts — by “paid,” they get donations. What a silly thing that is! And I know there are many in the reform movement who say until we get financial — campaign financial reform, it’s going to be hard to pass anything. But I’m particularly pained by Obama, who didn’t answer the question that was put to him about the ability of money to corrupt the legislature.

But I think the public is getting wise. And although Mr. Baucus continues to say he won’t support hearings, even, for single payer, there are going to be hearings. And for the first time, the single-payer movement, of which I’m a proud member, is getting voice. It’s just natural that the public would go for it, because they have had good experience with public medicine in this country and worldwide.

And the time is running out. I think Obama understands this; he’s a highly intelligent person. He caved. And I thought it was almost ludicrous when he talked about the good experience some people have had with employee-based insurance. That’s one of the most rapidly dwindling sources of healthcare we have in the country today. People are left out in the cold after decades of union-gained health benefits. And we have to act fast. And I’m hopeful this movement will catch on and the Congress will become representative of the people’s will.

Well, speaking of running out of time, Dr. Quentin Young, we are. Thanks for joining us, a more than half a century member of the AMA, national coordinator for Physicians for a National Health Program.

And in Helena, Montana, I want to thank Mike Dennison very much for being with us. We’ll link to your articles for the Montana Lee Newspapers State Bureau. He’s written extensively on healthcare and Senator Baucus, speaking to us from his home in Helena. 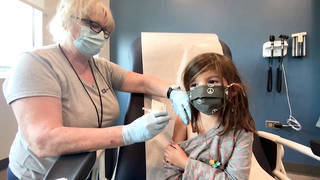