President Obama followed up his trip to Saudi Arabia and Egypt with a visit to the Buchenwald concentration camp in Germany on Friday, where 56,000 were killed during World War II. Obama invoked his great-uncle who had helped liberate a Buchenwald prison camp and returned a haunted man. Israeli journalist Amira Hass, columnist for Ha’aretz newspaper, comes from a family of Holocaust survivors. Her mother, Hanna Levy-Hass, survived the Bergen-Belsen concentration camp. Amira Hass edited her mother’s diary from that period, and it’s being published this month from Haymarket Books. [includes rush transcript]

AMY GOODMAN: President Obama followed up his trip to Saudi Arabia and Egypt with a visit to the Buchenwald concentration camp in Germany Friday, where 56,000 people were killed during World War II. Obama invoked his great-uncle who had helped liberate a Buchenwald prison camp and returned a haunted man here at home. He also strongly criticized anyone who denies the Holocaust and said Buchenwald, quote, “teaches us that we must be ever-vigilant about the spread of evil in our own time.”


I asked Amira Hass last week about her mother’s experience in Bergen-Belsen and the significance of how the Holocaust is remembered today.


AMIRA HASS: Maybe one of the lessons, I mean, one of the main things, and it’s not — what I learned from her, that life is not sacred in all circumstances, that very often she wondered in the concentration camp how come people stick to life even when it is so humiliating. And this is — nevertheless, I mean, she remained alive by accident, like many others. It’s not that she had a great desire to live at a certain moment. But she survived.


AMY GOODMAN: How did she end up in Bergen-Belsen?


AMIRA HASS: She was from Yugoslavia. Then she was — she wanted to join the partisans, but the Jews in the — the Jewish community was afraid. It was in ’43, just after — people were afraid that if she joins the partisans, the Germans will take revenge of the whole entire community. It was a few thousand. And they asked her not to join the partisans. So she had to make a choice. Even though she knew that anyway the Germans would kill every — I mean, that the aim was to kill everybody. By ’43, everybody knew.


Then she joined — then she was detained like the rest of them in some Gestapo prison in Yugoslavia. And then they were supposed to be murdered. You know, this assembly line of murder that the Germans built in Europe. So their turn came to be murdered. But then something didn’t work out in the bureaucracy, in the bureaucracy, and they had to ship them to — they decided to ship them all the way to Bergen-Belsen.


AMY GOODMAN: And where was Bergen-Belsen?


AMIRA HASS: Bergen-Belsen is in the north, north of Germany. And there she spent seven or eight months. And she wrote a diary, which was, of course, an illegal act. She also had a little school for children in her barrack, which was also an illegal act.


AMY GOODMAN: And how did she do both? How did she hide the diary?


AMIRA HASS: She had friends she found. There were people — that’s what I understood from her. And I think also here it’s written that people were — women at the barrack were always watching around to make sure that no cop or no spy or nobody suspicious see her writing. So this was with the knowledge and cooperation and assistance of friends of hers.


AMY GOODMAN: And why did she think it was so important to write?


AMIRA HASS: I think at first she wanted to unload a bit, to feel human. That’s what she wanted to do. But it was also natural for her to write. She was a person of words and of expressing herself. And then — and that’s what I write in my afterword — it’s only after Bergen-Belsen that she became silent, actually. She was very verbal before, I mean, in writing. And after Bergen-Belsen — and this is something I realized after her death — she didn’t talk much. I always thought she talked much, she told me much about the Holocaust. Now I realize she told very little. And also after Bergen-Belsen, she did not engage in writing, even though she was talented. And I try to explain this or to answer this riddle in my afterword.


AMY GOODMAN: How do you answer the riddle?


AMIRA HASS: Maybe she lost hope. She had — still in Bergen-Belsen, she had hoped for a different world, for a better world. And after Bergen-Belsen, more so with the years and in Israel. And, you know, she told me a few years before she died, she told me, “All my worlds were destroyed.” And she meant world — the Jewish world and the diaspora, because she was a strong —- she wanted to live in the diaspora. She was not a Zionist. So this one was destroyed with the Nazi or the Nazi German industry of murder. That’s how I term the Holocaust. The Holocaust is an incorrect term.


AMIRA HASS: The Holocaust is as if something came out from the sky, from heaven, some disaster, a calamity, a nature calamity, and not human-made calamity. And so, this is -—


AMIRA HASS: The German industry of murder. Or the assembly line of murder.


The second world that was destroyed was socialism. She was a socialist, a communist, and very soon she saw that the socialist world was not what she meant it to be, what she thought socialism should be.


Then, of course, Israel. Even though she was not a Zionist, she came to Israel as a refuge. But then, living through Israeli oppression of the Palestinians was also one sort of destruction.


And then the destruction or the decomposition of Yugoslavia that she loved so much.


So I think the disillusionment made her mute in her late years.


AMY GOODMAN: How the Holocaust is used today — President Obama going to Saudi Arabia, then Egypt, then he’ll go to Buchenwald to the concentration camp. Your thoughts on this?


AMIRA HASS: I think it’s very important to remember the fight of the world against this industry of murder and the philosophy of the super race or the superman or the —-


AMIRA HASS: Yeah, master race, yes. It’s very important. It’s sixty — it’s more than sixty years. It looks like the past, the distant past, but it is not.


But the problem is that it has been used as if it is the only — that the only victims were the Jews, that the only target were the Jews, and that it’s the first time in human history that you have such racist philosophy trying to impose itself over the entire world. The problem is when you start to make competition of victimhood. “Oh, we are more victims than you. That’s why we are forgiven about everything.” This is the problem.


And I think that’s why I appreciate when he goes to Buchenwald. I think that beyond the propaganda that every act has, it has important content. We often ask ourselves what was different. I mean, human — the West, the Christian West, the Christian white West, is responsible for the murder of millions and millions of people, already before the ’40s, the ’30s and the ’40s: colonialism, slavery — it’s not new — the conquest of the Americas, all this. What still we have to remember, that there was something peculiar about the murder during the Nazi times, is that it was so organized. It was not a — death and murder were not byproduct of a lucrative expedition, but turned into a goal, turned into the main product. This is the difference, from the point of view of the culprit, of the perpetrator, not from the point of view of the victim, because a slave who was tortured by hard labor until death, the suffering is — I mean, there is no way to measure suffering and injustice. So when we do this, it’s in order to understand. When we diagnose an illness, it is in order to find the remedy; it’s not in order to compare — “Oh, you suffer more, and you suffer less.”


AMIRA HASS: No, they were — she, my father, their immediate friends who were also survivors but also active in the Israeli Communist Party — were enraged, of course, were enraged. And they always — actually, my mother was a permanent, I could say, refugee, and she always wanted to run away. My father was more, somehow, rooted in Israel, and that’s why more expressing his anger with the Israeli exploitation of the Holocaust.


I remember in ’82, during the war against Lebanon in ’82, they had — they wrote a marvelous flier that they distributed in the streets of Tel Aviv. And it called Israel to stop merchandising the Holocaust. They wrote it themselves, the two of them. And I really remember them working, sick with what was happening. Also I remember them, always when we heard the war jets flying over our house in Tel Aviv, they always shrank. And I didn’t understand what happened. They said, “We know what is going to happen in two minutes. They are going to drop bombs. We’ve been through it.” So it’s not that they make a comparison, you know, or a parallel, but they could identify, and they were very angry. And, I mean, even “angry” is not the right word.


My father told me — and this is, again, not for comparison, but he told me, and this was in the time of the first Intifada, when we thought that the repression was really rocketing. And now, in comparison, it looks like a benign period, in comparison to what is happening today. And he said, “OK, it’s true that we were — what we’ve been through under Nazi Germany was extermination, etc., but it was five years, and it ended. So, our suffering took certain years, there was a fight against it, and it ended, the suffering. But,” he says, “I’m wondering, now with the Palestinians it goes on and on and on without an end, so I don’t know what is worse” — without comparing, but thinking. 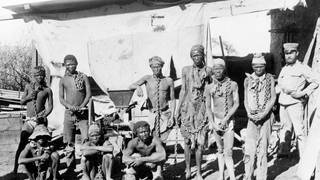