Irish Nobel Peace Laureate Mairead Maguire speaks to us from her jail cell in Israel. She was taken into custody along with twenty others, including former US Congress member Cynthia McKinney, when the Israeli military boarded their ship in international waters as it tried to deliver humanitarian aid to Gaza. [includes rush transcript]

JUAN GONZALEZ: We begin today with the latest news of the ship that was seized by the Israeli military Tuesday as it tried to deliver humanitarian aid to Gaza. Israeli forces boarded the ship and towed it to the Israeli port of Ashdod. The twenty-one activists on board include former Congress member and presidential candidate Cynthia McKinney and the Irish peace activist and Nobel laureate Mairead Maguire. Huwaida Arraf and Lubna Masarwa were released, while the other nineteen remain in detention.


AMY GOODMAN: Huwaida Arraf is the founder of the Free Gaza movement. She joins us now on the phone from Israel.


Huwaida, welcome to Democracy Now! Explain why you took this boat trying to get to Gaza and then what happened to you on board.


HUWAIDA ARRAF: [inaudible] Hello to you all.


The purpose of our mission was to highlight to the international community that what Israel is doing to Gaza is blatantly illegal, and our government isn’t doing anything about it. Israel constantly claims that their policies are based on security, but what they’re doing — imposing collective punishment on an entire civilian population.


We were carrying on our very, very small boat some medical aid, some rebuilding supplies, because after the January — December-January assault on Gaza, thousands of homes have been destroyed, tens of hospitals and schools all demolished. And, you know, the donor community supposedly pledged [inaudible] Gaza, but no one is saying anything. Not one country is saying anything about the fact [inaudible] the entire Gaza Strip, and not one bag of cement [inaudible] —


AMY GOODMAN: Huwaida, we’re going to interrupt for a minute, because, Juan, it sounds like we have someone else from a jail cell in Israel.


JUAN GONZALEZ: Yes, it sounds like we have Mairead Maguire, the Nobel Prize winner, on the phone from her jail cell.

MAIREAD MAGUIRE: Thank you very much, indeed. Thank you.


JUAN GONZALEZ: Could you tell us what is going on right now with you and the others who are being detained?


MAIREAD MAGUIRE: Yes. We have just been locked into our cells now for a couple of hours. We are currently going through their process. We are being charged with entering illegally into Israeli — near Israeli shores. We are going, it looks like, to be deported from Israel. We did not choose to come to Israel. Our little boat was boarded by the navy combat soldiers, and they came in in full riot gear onto our boat when we were just twenty-five miles off the shore of Gaza. We were under gunpoint, forcibly taken to Ashdod, held in the detention center overnight. And then I was removed from Ashdod detention center, handcuffed in a military vehicle, and brought here to the prison, where we’re currently being held. All of us, all nineteen — there were twenty-one, but Huwaida and Lubna are out — but the rest of us are being held here in detention in this prison.


AMY GOODMAN: What is your response, Mairead Maguire, to Mark Regev, the Israeli spokesperson, who said aid is free to pass into Gaza?


MAIREAD MAGUIRE: No, that is wrong. I mean, we know it is not free. I mean, Gaza is like a huge prison, but — because its borders are closed. The sea pass into Gaza, which has been closed for over forty years by the Israeli government — we are only the seventh ship to get in to the port of Gaza that tried to break the siege.


And as we do that, it’s very interesting, we pass the gas fields of Gaza. You know, Gaza has huge gas deposits, which Israel is now beginning to use. So it’s very important that there is the issue of who owns the gas in the Gazan Strip. And also farmers — fishermen, who try to go out without —- in about twelve miles to fish for their families, are shot up and have been killed by the Israeli navy in that area.


So, Gaza is a huge occupied territory of one-and-a-half million people who have been subjected to collective punishment by the Israeli government. That breaks the Geneva Convention, every international law in the book. And the tragedy is that the American government, the UN and Europe, they remain silent in the face of the abuse of Palestinian human rights, like the freedom, and it’s really tragic.


And it is also tragic that out of ten million Palestinians of a population, almost seven million are currently refugees out in other countries or displaced within their own country, particularly after the horrific massacre by Israeli jet fighters after just earlier this year. Twenty-two days Israel bombarded Gaza, Gazan people, civilians. And we’re not sure what kind of weapons were dropped. We need the scientists. We need people to go in to see: is it depleted uranium in the very soil of the Gazan fields now? Unfortunately, Israel does not want human rights activists in there to see what they’ve done and what they’re doing. Even the representative of [inaudible] -—


MAIREAD MAGUIRE: —- is not allowed in.


JUAN GONZALEZ: And, Mairead Maguire, I’d like to ask you, to your knowledge, has your government or the government of the United States, in the case of Cynthia McKinney or some of the others, attempted to visit with the detainees or to lodge protest with the Israeli government?


MAIREAD MAGUIRE: Yes, we have had [inaudible] our consulates in the different governments come here to see us. And we are concerned about the five people who came from Bahrain, and — because they don’t have — their government doesn’t have the same links with Israel, and we are concerned for their safety. We have asked that all those who were — who were hijacked — we were hijacked on the seas of Gaza — that they be all given freedom and their goods returned, because we have got to look out for each other.


AMY GOODMAN: Mairead Maguire, what will happen now? And we understand that some people were injured.


MAIREAD MAGUIRE: Yes, indeed. I mean, when as were the combat troops in masks and fully armed came on board our small boat, some people were injured. And even during — that happened during the day. But our life was put at risk even more, because the previous night, during the night, when we were in international waters, we were — a couple of Israeli naval ships came up around us. Over the radio, they told us if we did not turn back into Cyprus, they would shoot at our boat. They cut off our communications, including our satellite communications. So we were in grave danger of actually being killed at that point.


The second thing was, when actually the navy combat forces came on board our boat, they wouldn’t allow the captain to take the boat to Ashdod; instead, they took over. And, you know, I really thought that we were all going to drown, because when we got near, when we were sailing to Ashdod, there was heavy winds, there was water coming in, and it was — really we were in a very, very dangerous position. So we were literally hijacked, taken at gunpoint by the Israeli military. And now we are here in prison, and they are threatening to deport us. We were brought here against our will. We didn’t come here by choice, and we are not here by choice.


AMY GOODMAN: Mairead Maguire, what jail cell are — what jail are you in now?


MAIREAD MAGUIRE: We’re in Giv’on Prison, and we’re — the women here are on one side, and the men are on the other side.


AMY GOODMAN: Mairead Maguire, I want to thank you for being with us, Irish peace activist and Nobel Peace Prize winner, speaking to us from her jail cell, redefining the cell phone. Huwaida Arraf before her, founder of the Free Gaza movement. Mairead is one of nineteen people who remain in jail. Huwaida just got out. 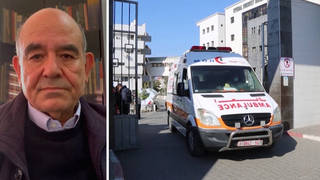