Hiroshima and Nagasaki: A Look Back at the US Atomic Bombing 64 Years Later

This year marks the sixty-fourth anniversary of the US atomic bombings of the Japanese cities of Hiroshima and Nagasaki that killed over 150,000 people instantly. Commemorations this weekend in Japan and around the world marked the US bombing of Hiroshima on August 6, 1945, and then on August 9th, of Nagasaki. We play the report of Wilfred Burchett, the first journalist to make it into Hiroshima, as well as Anthony Weller, the son of Pulitzer Prize-winning journalist George Weller, who was the first reporter to enter Nagasaki after the bombing, and we hear from Hiroshima survivor Shigeko Sasamori. [includes rush transcript]

StoryMay 17, 2016Chomsky on Obama’s Visit to Hiroshima & Presidential Legacy: “Nothing to Rave About”

ANJALI KAMAT: This year marks the sixty-fourth anniversary of the US atomic bombings of the Japanese cities of Hiroshima and Nagasaki that killed over 150,000 people instantly. Commemorations this weekend in Japan and around the world marked the US bombing of Hiroshima on August 6th, 1945, and then on August 9th, of Nagasaki.


The Mayor of Nagasaki called for a global ban on nuclear arms at a ceremony Sunday and urged nuclear-armed countries to travel to Nagasaki and understand the destruction experienced there.


The bomb dropped over Nagasaki killed 74,000 people immediately and left another 75,000 seriously wounded. In Hiroshima, 70,000 to 80,000 people were killed in an instant, and another 70,000 seriously injured. By official Japanese estimates, nearly 300,000 people died from the bombings, including those who died in the ensuing months and years from related injuries and illnesses. Other researchers estimate a much higher death toll.


To mark the anniversary of the bombings, UN Secretary-General Ban Ki-moon issued an urgent call for disarmament.


BAN KI-MOON: Sixty-four years ago, atom bombs rained down on Hiroshima and Nagasaki. Upon seeing such horror and devastation, people throughout the world thought such carnage must never happen again. But thousands of nuclear weapons remain in global arsenals. The risk of nuclear terrorism is real. Let us convince leaders, once and for all, of the waste, futility and dangers posed by weapons of mass destruction. In the face of this catastrophic threat, our message is clear: together, we must disarm.

AMY GOODMAN: Well, today, sixty-four years after the bombings, we host a discussion on what took place in Hiroshima and Nagasaki and the present nuclear landscape. Currently, the nine nuclear powers — the United States, Russia, France, England, China, Israel, Pakistan, India and North Korea — have more than 27,000 operational nuclear weapons among them. The US and Russia alone have enough nuclear warheads to launch the equivalent of 100,000 Hiroshimas in just twelve minutes, this according to Bruce Blair, president of the World Security Institute.


Speaking in Prague earlier this year, President Obama called for a world free of nuclear weapons.


PRESIDENT BARACK OBAMA: So today, I state clearly and with conviction America’s commitment to seek the peace and security of a world without nuclear weapons.

AMY GOODMAN: That was President Obama.


Well, Pulitzer Prize-winning journalist George Weller worked for the Chicago Daily News and was the first reporter to enter Nagasaki after the bombing of August 9th, 1945. Weller hired a rowboat to get himself there and wrote a 25,000-word report on the horrors that he encountered. But his report didn’t get past the military censors. General MacArthur personally ordered the story be killed, and the manuscript was never returned.


George Weller died in 2002, but in 2005 his son, Anthony Weller, discovered a copy of the suppressed dispatches. They’re now published as a book called First Into Nagasaki: The Censored Eyewitness Dispatches on Post-Atomic Japan and Its Prisoners of War.


Democracy Now! spoke to Anthony Weller soon after he found his father’s articles. This is how he described the physical health of the survivors in Nagasaki and what his father had called “Disease X.”


ANTHONY WELLER: He was as astonished as the Japanese doctors were, of course, by what he referred to in his reports as “Disease X.” It was perhaps not so astonishing to see some of the scorches and burns that people had suffered. But to see people apparently unblemished at all by the bomb and who had seemingly survived intact suddenly finding themselves feeling unwell and going to hospital, sitting there on their cots surrounded by doctors and relatives who could do nothing, and finding, when he would go back the next day, that they had just died, or that, let’s say, a woman who had come through unscathed, making dinner for her husband and having the misfortune to make a very small cut in her finger while peeling a lemon, would just keep bleeding and bleed to death, because the platelets in her bloodstream had been so reduced that the blood couldn’t clot anymore.

ANJALI KAMAT: Wilfred Burchett was the first journalist to make it into Hiroshima, which was bombed three days before Nagasaki, August 6th, 1945. He was an Australian reporter who defied the US military, which had said that the whole area of southern Japan was off-limits. He took a train for thirty hours to Hiroshima. In this recording, an excerpt from a documentary by Andrew Phillips called Hiroshima Countdown, Burchett describes what he saw.


WILFRED BURCHETT: These people were all in various states of physical disintegration. They would all die, but they were giving them whatever comfort could be given until they died. And the doctor explained that he didn’t know why they were dying. The only symptoms they could isolate from a medical point of view was that of acute vitamin deficiency. So they started giving vitamin injections. Then he explains where they put the needle in, then the flesh started to rot. And then, gradually, the thing would develop this bleeding, which they couldn’t stop, and then the hair falling out. And the hair falling out was more or less the last stage. And the number of the women who were lying there with sort of halos of their black hair which had already fallen out. I felt staggered, really staggered by what I’d seen. And just where I sat down, I found some lump of concrete, I remember, that had not been pulverized. I sat on that with my little Hermes typewriter, and my first words, I remember now, were, “I write this as a warning to the world.”

AMY GOODMAN: “I write this as a warning to the world,” the words of Wilfred Burchett, as we turn now to one of the Hiroshima survivors. She was a Hibakusha. Shigeko Sasamori was a thirteen-year-old schoolgirl when the bomb dropped on Hiroshima. She was one of twenty-four young Japanese women brought to New York by the American journalist Norman Cousins for surgical reconstruction after the bombing.


Well, I had a chance to visit Shigeko Sasamori at her home in Los Angeles six years ago.


SHIGEKO SASAMORI: I felt the very, very strong light. I can’t explain how strong it is. Very bright light. But before the bright light, I saw airplane drop the white thing. Then, same time, knock me down, a strong wind. Then I don’t know how long I was unconscious, but when I noticed, looked around, I couldn’t see anything, I couldn’t hear anything, but just see red and black and grey. So dark. Then, just like a dead country or dead place. Then, for a while I’m waiting, just like a deep fog going away, faraway, the blackness, redness going away. And then I can see around the area.


And that’s the time — I don’t know how to describe, because I’ve never been to hell, but when people say hell and heaven, that is hell. Horrible. People wasn’t people. Just horrible horror.


When they find me, they couldn’t recognize, because my face was like a big ball, black ball. No eye, no eyebrow, nothing. My hair was kinky and burned. I burned one-fourth of body, front half, both hands, both arms, neck and chest and whole face. So, while I’m lying down, people come to see me and talking to my mother. “Is she still alive? Is she still OK?” Everybody thought I’m going to die.

AMY GOODMAN: This is Democracy Now!, democracynow.org, The War and Peace Report. And she was a Hibakusha, which means a survivor of the atomic bombing, Shigeko Sasamori, whom I visited in her home in Los Angeles, brought here to go through reconstructive surgery for her burned body and face.


When we come back from break, we’ll be joined by three people who have made the nuclear issue their life’s work: Frida Berrigan, Pervez Hoodbhoy and Daniel Ellsberg. Stay with us.

“For the 64th Time: No More Nuclear War”–A Roundtable Discussion on Disarmament 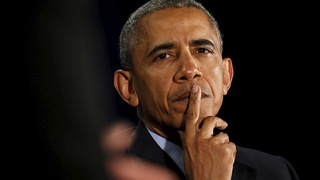 Chomsky on Obama’s Visit to Hiroshima & Presidential Legacy: “Nothing to Rave About”