StoryJul 21, 2020“I Love My Students. I Also Want to Live”: Teachers Demand Safety as Trump Pushes Schools to Reopen

AMY GOODMAN: Before we move on, Juan, you had a very interesting piece, your column in the New York Daily News today.

JUAN GONZALEZ: Yes. Well, you know, there is a major movement now beginning to spread all across the United States in public education: another effort to privatize some aspects of public education, which is called “value added models,” to measure teacher performance in Los Angeles, in several other cities. And then in New York City now, it has erupted into a major battle, where the chancellor of the public school system attempted to publish today — or not to —- to release to the press today the names of more than 12,000 teachers and the test scores of their individual students, but according to what they call a “value added model” -— how much did that teacher improve the test scores of their children when they were in the teacher’s class? It’s a very controversial, very arcane statistical model that has been created largely by economists, which attempts to tell — to quantify exactly what a teacher’s real impact on a child is. What the chancellor attempted to do was actually put the names of these teachers, which of course would have created the ten best and the ten worst teachers in all the press reports. The United Federation of Teachers went to court on it yesterday. A judge told the Department of Education, “You can publish the data, but not the names, until we have a full hearing on this matter.” So the school system decided to hold up on it.

But the interesting thing that I uncovered is that the consultants who designed this particular report warned the school system, you should not use this to determine promotions, tenure and evaluations of teachers, because obviously testing is only one aspect of what a teacher does in the classroom. There’s all other kinds of things that a teacher does to improve a child’s education, and it should not be used as the sole measure of whether a teacher is doing a good job or not. Despite his own consultants’ warning, the chancellor went ahead and was about to release this and, in effect, possibly sully the reputations of a lot of teachers. It’s really part of an overall attempt to — an assault on public employees, because public employees are part of the only group yet that can still challenge firings of themselves, because they can go to arbitration and have an independent arbitrator determine whether a teacher has done a good job or not, or a policeman or a fireman. And this attempt now to have private industry come in, quantify and measure the work that public employees do is all part of the continuing privatization of government services and the attempt to bring, quote, “business methods of accountability” into public employment.

AMY GOODMAN: And this happened in Los Angeles?

JUAN GONZALEZ: This happened in Los Angeles. The Los Angeles Times had a series outing the best and the worst teachers, according to this model. And within a few days, one of the teachers committed suicide in Los Angeles, and so that this is a really controversial issue now that will spread across the nation. And New York — in the hearing that will be held in November; the judge will hold a hearing as to whether the city can do this — will become a flashpoint now, a major center for this debate.

AMY GOODMAN: And wouldn’t it lead teachers to not want to have difficult students, because they don’t want to bring down their rating? They, themselves, could get fired, because they tried to help —

JUAN GONZALEZ: Well, precisely what the consultant said, that if you attempted to gauge performance along this line, there would be a gaming of the system, as everyone would then try to make sure that if their children’s test scores are publicized, that they don’t have the most problematic kids in their classrooms. So it would really begin to bring a whole new distortion to the whole education process. 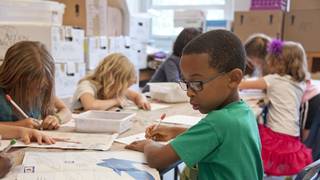 “I Love My Students. I Also Want to Live”: Teachers Demand Safety as Trump Pushes Schools to Reopen