A new expose in The Nation magazine has revealed that Lou Dobbs has relied for years on undocumented labor for the upkeep of his multimillion-dollar estates and the horses he keeps for his daughter. Over the past year, investigative journalist Isabel Macdonald has tracked down and interviewed several workers who have done projects for Dobbs. Dobbs has been called the most influential spokesperson for the anti-immigration movement, and Dobbs has often used his TV and radio shows to criticize employers who break US law by hiring undocumented workers. [includes rush transcript]

AMY GOODMAN: Former CNN host Lou Dobbs is heading to Virginia Saturday to address the Virginia tea party convention. It marks his second major tea party address of the year, and some are speculating Dobbs could be laying the groundwork for a possible run for president in 2012.


Dobbs resigned from CNN last year after a coalition of Latino groups launched a campaign for his removal over his alleged anti-Latino bias in covering immigration reform. Dobbs has been called the most influential spokesperson for the anti-immigration movement, and he has often used his TV and radio shows to criticize employers who break US law by hiring undocumented workers.

AMY GOODMAN: Well, a new exposé in The Nation magazine has revealed that Lou Dobbs himself has relied for years on undocumented labor for the upkeep of his multimillion-dollar estates and the horses he keeps for his twenty-two-year-old daughter Hillary, a champion show jumper.


Over the past year, investigative journalist Isabel MacDonald has tracked down and interviewed several workers who have done projects for Dobbs. Two of the workers agreed to be videotaped as long as their faces weren’t shown. Rodrigo Ortega, a native of Chiapas, Mexico, worked for a Florida landscaper contracted by Dobbs.


RODRIGO ORTEGA: [translated] I am an immigrant who doesn’t have papers. But I worked for him, because he’s a very important person. I had the most difficult work there at the big house he has, like cutting the grass, cutting the trees, cleaning the garden. I don’t have papers, but I am here, and I worked for a long time for him.

AMY GOODMAN: Pedro Gomez, a native of the Oaxaca region of Mexico, cared for Dobbs’s horses for a year in 2008 and 2009 in Vermont and Florida.


PEDRO GOMEZ: [translated] I worked for one year with Lou Dobbs’s horses. We worked twelve hours a day, more or less. My situation with immigration is bad, because I still don’t have papers. When I came from Mexico, I didn’t get them.

AMY GOODMAN: Isabel Macdonald’s article, “Lou Dobbs, American Hypocrite,” appears in the new issue of The Nation. A Spanish language version of the article appears in today’s edition of El Diario. Research support for the article was provided by the Investigative Fund at the Nation Institute.


We did invite Lou Dobbs to appear on the program, but he wasn’t free today. His producer said that his daughter is having a baby.


Isabel Macdonald, thanks for joining us. I know you were supposed to be on his show today, but that was canceled. Talk about what you found.


ISABEL MACDONALD: Well, I found that at the very same moment that Lou Dobbs was talking — for instance, April 2006, he suggested that employers who hire undocumented immigrants should face felony charges. At the very same time, he had undocumented workers looking after his horses, his show jumping horses, valued at about a million dollars each, these horses, and also caring for the grounds of his estate in West Palm Beach, Florida.


What was interesting in the case of one of the horse stable workers that I interviewed was that, in the case of this one worker, he had actually crossed the border on foot through the Yuma Desert and come with an expectation of finding a job looking after Dobbs’s horses. So I think it really highlights the extent to which Dobbs’s rhetoric about immigration is completely out of touch with the reality of the immigrant workers who form such an integral part of the American economy, especially when it comes to service sectors, and especially when it comes to the upkeep of the Dobbs’s own lifestyle.


ISABEL MACDONALD: Well, there were — in West Palm Beach, there were workers who were undocumented immigrants from Guatemala and from Mexico, who have been involved for over — over the course of — basically, the research was looking at workers who have been involved with the upkeep of Dobbs’s grounds and horses over the past five years. And these workers all — none of the workers that I talked to who had cared for Dobbs’s grounds had legal immigration status.


The real — I mean, the real fundamental issue that this also raises is that there is, on the one hand, this huge demand created by people like Dobbs. We know that affluent white Americans are amongst the heaviest users of the services of undocumented workers. And at the same time, there is no way for them to do this work legally. So they are being pushed into, by the very policies that Dobbs advocates of stricter enforcement of immigration laws, which tends to — I mean, that falls so heavily on these workers and that has created a lot of fear in their own lives. One of the workers who had cared for Dobbs’s grounds in West Palm Beach, Florida, was actually deported last year to Guatemala. He was caught in an Immigration and Customs Enforcement snag operation at a train station. And this — I mean, this has profound implications for the kinds of working conditions that all Americans who are working in sectors where the undocumented are prevalent face.


AMY GOODMAN: We only have thirty seconds. What you were most surprised by and feel is most important in your investigation?


ISABEL MACDONALD: Profound questions about labor rights violations on Dobbs’s own estate. I think that this — given that he’s built his reputation as a defender of the American worker, I think that this is something that we should really be looking further into: the impact of the policies he’s promoted on lowering wages and on deteriorating working conditions for many workers, but documented and undocumented.


AMY GOODMAN: Isabel Macdonald, I want to thank you for your report, your extensive investigation in The Nation magazine, freelance journalist, former communications director of the group Fairness and Accuracy in Reporting. 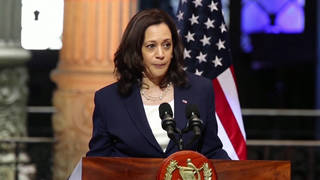