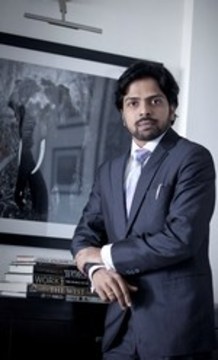 Barunesh Chandra says it was through his interest in the Indian author and activist Arundhati Roy that led him to Democracy Now!, after finding the interview Amy Goodman conducted with Roy on the conflict in Kashmir several months ago on the Internet.

“I am a big fan of Arundhati … I find a lot of her views coinciding with mine,” wrote Chandra in an email from his home in New Delhi. “I shared the Arundhati interview on Facebook since it offered a perspective of the Kashmir situation that the Indian media never had the courage to show. In fact, I wanted, and hoped, that my Indian friends would understand and appreciate the other side of the story, if it was told to them by one of our own.”

Chandra is a corporate lawyer who describes himself “as a social and political activist at heart” and often blogs about key national issues in India.

“I like Democracy Now! since it is a one-of-kind media platform, which acts as global watchdog for Democracy,” Chandra said. “It is even more appealing because, being an American organization, it can look inwards and offer a fresh perspective of the state of democracy in America, which presumes itself as the beacon of democracy in the world. For instance, no mainstream media organization in India has had the courage to challenge the oft-repeated government rhetoric that Kashmir is an integral part of India, or to even explain that the map of Kashmir—which the Indian government professes to be correct—is actually farcical because a large portion of Kashmir has not been under India’s control almost from the beginning. Similarly, none of the U.S. mainstream media outlets have had the courage to take the government head on and tell them point blank that their invasion and occupation of Iraq and Afghanistan is a criminal breach of international law. In such situations, the media outlets are invariably reduced to the role of government’s mouthpiece and start assaulting their own raison d’être. Therefore, independent media outlets like Democracy Now!—that can cut across national boundaries and sentiments—assumes greater significance.”

Chandra says that he has suggested the Democracy Now! Facebook page to his entire friend list. “Apart from the Arundhati Roy interview, I have shared the report on Julian Assange’s arrest on my Facebook page to show solidarity to the cause of transparency and free speech (an issue which effects every single person in this world),” Chandra said.

Democracy Now! noticed Chandra when he posted a comment on our Facebook page December 6, thrilled to be our 100,000th fan. “When I visited your page to find out more about your organization and saw the opportunity of becoming a milestone fan, I seized it.”

StoryJun 20, 2022Juneteenth Special: Historian Clint Smith on Reckoning with the History of Slavery Across America
The original content of this program is licensed under a Creative Commons Attribution-Noncommercial-No Derivative Works 3.0 United States License. Please attribute legal copies of this work to democracynow.org. Some of the work(s) that this program incorporates, however, may be separately licensed. For further information or additional permissions, contact us.

Juneteenth Special: Historian Clint Smith on Reckoning with the History of Slavery Across America