The White House is predicting victory in its long-running standoff with Republicans on a nuclear arms reduction treaty with Russia. The New Strategic Arms Reduction Treaty, or New START, calls for the United States and Russia to cut their deployed arsenals to 1,550 nuclear warheads and 700 missile silos and bombers each. We speak with leading nuclear disarmament advocate, Jonathan Schell. [includes rush transcript]

AMY GOODMAN: The White House is predicting victory in its long-running standoff with Republicans on a nuclear arms reduction treaty with Russia. The New Strategic Arms Reduction Treaty, or New START, calls for the United States and Russia to cut their deployed arsenals to 1,550 nuclear warheads and 700 missile silos and bombers each. Republicans have stalled the proposal since it was reached earlier this year, in a bid to seek more nuclear funding and maintain support for the so-called “missile defense” program. But with Congress preparing to adjourn for the year, Democrats say they’ve earned enough Republican support to ensure Senate passage.

PRESS SECRETARY ROBERT GIBBS: START is going to be voted on before Congress leaves town. And this is a treaty that has — that was negotiated over the course of many months, signed in April in Prague by the two presidents, and up for review and inspection since then — not to mention the debate that has been had on the floor exceeds the time of debate for many treaties in the past.

SEN. MITCH McCONNELL: A decision of this magnitude should not be decided under the pressure of a deadline. The American people don’t want us to squeeze our most important work into the final days of a session; they want us to take the time we need to make informed and responsible decisions.

AMY GOODMAN: McConnell has led calls to delay the vote until Republicans boost their standing in the Senate next month. In a response on the Senate floor, Democratic Senator John Kerry blasted Republican opposition.

AMY GOODMAN: A Senate vote could come as early as today.

For more, we’re joined by the veteran journalist Jonathan Schell, leading advocate for nuclear disarmament, Doris Shaffer Fellow at the Nation Institute, author of several books — his most recent, The Seventh Decade: The New Shape of Nuclear Danger.

Welcome to Democracy Now!, Jonathan Schell. Explain what this New START treaty is.

JONATHAN SCHELL: Well, it’s sort of garden-variety, moderate, sensible, minimal arms control. I think of it as arms control maintenance. It does basically two things that have been going on for the last 30 years or 40 years, really since Richard Nixon inaugurated arms control in 1972. And that is, it shaves the arsenals a little bit, a couple of hundred warheads, also reduces the number of delivery vehicles that are allowed. And maybe more important than that, it reintroduces inspections, which have lapsed with the lapse of the START treaty, the old START treaty. So this is what’s been going on for 40 years in arms control, and it pushes it along in a kind of minimal way. It’s a little bit like paying the mortgage on your house. You know, if you pay your mortgage, it’s not a big deal. But if you don’t, the consequences could be pretty dire. And that’s pretty much the way I look at this.

AMY GOODMAN: What are those consequences?

JONATHAN SCHELL: Well, the consequences of not passing the treaty really would reverberate throughout the entire nuclear regime. And by “nuclear regime,” I mean the Nuclear Non-Proliferation Treaty, I mean various disarmament efforts around the world, because those things are really intimately linked. It’s like one net. It’s like one web. And you pull one strand, and it has an effect over on the other side. And in this case, it would really pull the linchpin out of that system, because if the U.S. and Russia renege on their obligations under the Nuclear Non-Proliferation Treaty to proceed with disarmament, it sends a signal out to the rest of the world that we’re going to be living in a nuclear-armed world, and proliferation begins to step up. It really undercuts nonproliferation efforts across the world.

AMY GOODMAN: Explain why the Republicans are opposed to this.

JONATHAN SCHELL: You know, one reason obviously is politics. We’ve heard from Mitch McConnell that the most important thing for him is defeating Obama in the next presidential election. So that’s from his own mouth. But I think that they — traditionally, they’re sort of — stock and trade, has been accusing Democrats of weakness on this or that. And I think that they hope to make political hay in that way. And also, very simply and tactically, they will have more Republican senators when the new Senate convenes next year. And I think they might hope to actually stop the — have a better chance of stopping the treaty altogether for those reasons, or else to demand a higher price for passing it. Already, the price for passing that they’ve exacted has been very high.

AMY GOODMAN: Can you step back and explain why we have the same relationship with Russia that we’ve had for decades? Explain what it is and what you’d like to see.

JONATHAN SCHELL: Well, this is really the deeper question, because here we are — you know, it’s 1989, 1991, the Cold War ends. Let’s remember why these arsenals were built. They were built for Cold War purposes. And when the Cold War ended, their raison d’être, their political raison d’être, really disappeared. And so, in a certain sense, it’s really fantastical that the United States and Russia are still aiming 1,550 or 2,000 strategic warheads at one another. What is that all about politically? It really defies rational explanation. And so, what you really have to ask yourself is why is it, so long after the end of the Cold War, that the momentum or inertia, or whatever you want to call it, of this nuclear standoff, this mutual assured destruction relationship, persists and we can’t really unravel it in a more radical way?

AMY GOODMAN: What do weapons manufacturers have to do with this?

JONATHAN SCHELL: Well, obviously, their interests are very, very great. And when you — when their money is threatened, they push back. And so, it’s an important factor. But I think it maybe not be the most important factor here.

AMY GOODMAN: Let me ask you this. One of the releases in WikiLeaks, a senior government official in Yemen warned U.S. diplomats that poor security at the country’s main store of radioactive products could allow dangerous material to fall into the hands of terrorists, according to a leaked U.S. embassy cable. The official told the Americans that the lone guard standing watch at Yemen’s National Atomic Energy Commission facility has been removed from his post and that its only closed-circuit TV security camera, that’s broken down six months previously and was never fixed.

JONATHAN SCHELL: Well, what this shows you is that we’re approaching really a new point in the whole evolution of the nuclear age, and that is the point at which nuclear weapon materials escape from the control merely of states and get down to sub-state groups, including, of course, conceivably terrorist groups. It’s impossible to know when that line will be crossed, because almost by definition, that’s going to happen in secrecy somewhere. Some deal is going to go down in Azerbaijan or somewhere else, and that line will be crossed. We’ve been approaching it really for 60 years, because it’s just in the very nature of this technology that it spreads.

AMY GOODMAN: And so, the best way to deal with that?

JONATHAN SCHELL: The best way to deal with that is to roll back the technology as a whole. And that’s really where Obama’s commitment to move to a world free of nuclear weapons comes in, because the very same steps that you would take to actually eliminate nuclear weapons are the very ones that you would take to keep that technology from spreading into other hands. In other words, you’d get it under control, you would actually liquidate it so it didn’t exist. That would be an important step. And then you — so you’d solve really the two problems with one stroke.

AMY GOODMAN: Jonathan Schell, I want to thank you very much for being with us, leading advocate for nuclear disarmament. His most recent book is called The Seventh Decade: The New Shape of Nuclear Danger. 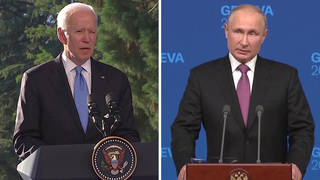